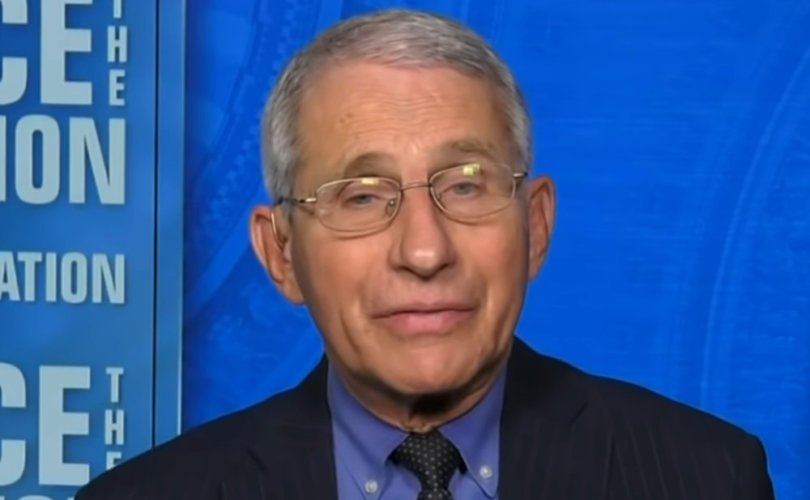 (LifeSiteNews) – CBS News brought on former White House COVID-19 adviser Dr. Anthony Fauci to condemn questions as to the cause of Buffalo Bills football player Damar Hamlin’s mid-game heart attack and whether it had any connection to whatever COVID-19 vaccines or boosters he may have taken.

During a January 2 game against the Cincinnati Bengals, the 24-year-old Hamlin collapsed shortly after being tackled, causing the game to be postponed and shocking countless players and fans. He was hospitalized in critical condition, placed on a ventilator, and was in intensive care until Monday. He is said to be improving, in good spirits, and no longer in need of ventilation, though the cause of the episode remains unknown.

A January 9 summary in The New York Times is representative of mainstream treatment of the subject: “It is not yet known why Hamlin’s heart stopped. But cardiac experts said the blow to his chest may have sent his heart into an arrhythmia. That injury is unusual: The chest must be struck in a brief moment — about 20 milliseconds — while the heart is relaxing.”

Outside the corporate media, many have questioned whether Hamlin was the latest in a string of young, healthy, even athletic individuals to potentially suffer heart problems as a possible result of the COVID-19 vaccines. Hamlin’s jab status is unknown (a viral rumor that he was boosted the day after Christmas stemmed from a social media account falsely claiming to be a doctor), but the National Football League boasts a 95% player vaccination rate (although it has been reported that as many as 15% may be using fake vaccination cards).

Speaking to sympathetic CBS anchor Major Garrett, Fauci bemoaned the possibility as “yet again another conspiracy theory – complete nonsense – [that] is going to have some people make a decision for themselves and their family not to get vaccinated which may cost them their lives.”

“In a very, very rare case, some of the mRNA vaccines can cause a self-limiting, almost invariably benign, inflammatory response in the heart, which generally resolves in a very short period of time,” he said. “It is very, very rare. When you compare that to the negative effects on the heart by myocarditis or pericarditis, which is inflammation of either the heart muscle or covering of the heart, and heart failure or heart medical problems, overwhelmingly COVID itself causes that in a dramatically higher rate than the relatively benign, mild myocarditis that you might have with the vaccine, which is very, very rare.”

However, mounting evidence indicates the problem with the shots, which were developed and tested in a fraction of the time vaccines usually take under former President Donald Trump’s Operation Warp Speed initiative, is much larger.

The federal government’s Vaccine Adverse Event Reporting System (VAERS) reports 33,334 deaths, 187,676 hospitalizations, 15,970 heart attacks, and 26,045 myocarditis and pericarditis cases as of December 23. An April study out of Israel indicates that COVID infection alone cannot account for such myocarditis cases, despite claims to the contrary. Jab defenders are quick to stress that reports submitted to VAERS are unconfirmed, as anyone can submit one, but U.S. Centers for Disease Control & Prevention (CDC) researchers recognize a “high verification rate of reports of myocarditis to VAERS after mRNA-based COVID-19 vaccination,” leading to the conclusion that “under-reporting is more likely” than over-reporting.

In December, Republican U.S. Sen. Ron Johnson of Wisconsin hosted a roundtable discussion during which civil rights attorney Aaron Siri detailed data from the CDC’s V-Safe reporting system revealing that 800,000 of the system’s 10 million participants, or approximately 7.7 percent, reported needing medical care after COVID injection. “25 percent of those people needed emergency care or were hospitalized, and another 48 percent sought urgent care,” Siri added. “Also, another 25 percent on top of the 7.7 percent reported being unable to work or go to school.”

Another study by a team of American, British, and Canadian researchers, published December 5 by the in the Journal of Medical Ethics, found that COVID booster mandates for university students – a relatively healthy group at relatively low risk from the virus – do far more harm than good: “per COVID-19 hospitalisation prevented, we anticipate at least 18.5 serious adverse events from mRNA vaccines, including 1.5–4.6 booster-associated myopericarditis cases in males (typically requiring hospitalisation).”

Second, every time Fauci has said something isn’t true about covid, it has often ended up being true. These Fauci statements make me want to ask more questions about the covid shot’s connection to heart issues in young people, not less.

Fourth, science is about questioning everything. Be immediately skeptical on any issue when someone says you can’t ask or talk about it. Refusing to allow questions or discussion is the foundation of propaganda, not science.

That means we need far more information about all facets of his medical condition, not less. Dictating what can & can’t be said about a subject creates far more conspiracy theories than it eliminates. Also, data’s clear. No healthy young person should ever get covid shot. Period.

Further, critics say Fauci himself is saddled with deep credibility issues on all things COVID.

In February 2020, Fauci said there was “absolutely no reason whatsoever to wear a mask” in the United States; by July, he was arguing that Americans wear not only masks, but goggles and face shields. Critics also faulted Fauci for suggesting that handshaking should be abolished yet sexual activity with strangers remains alright if “you’re willing to take a risk,” and championing COVID vaccine mandates despite being unwilling or unable to give a “firm answer” on why the vaccines are necessary for those with immunity from prior infection.

Fauci and his defenders insisted that the work NIAID approved was not gain-of-function research and could not have lead to COVID, but last year the conservative investigators of Project Veritas obtained and released documents showing that, before going to NIAID, EcoHealth previously pitched its funding request to the Defense Advanced Research Projects Agency’s (DARPA), which rejected it on the grounds that the project would violate a preexisting moratorium on GOF research and failed to account for its potential risks.

Last September, Andrew Huff, an ex-EcoHealth vice president who also served as an Army infantryman in Iraq and as a research fellow in the U.S. Department of Homeland Security, said in a sworn statement that the “process of developing SARS-COV2 was also described in detail in the proposal submitted to, and ultimately funded by, the National Institutes of Health (HHS NIH), The National Institute of Allergy and Infectious Diseases (NIAID), by EcoHealth Alliance with the WIV and [University of North Carolina] listed as collaborators.”

None of the above, however, has dimmed Fauci’s standing as a noble medical authority in the eyes of the mainstream media.