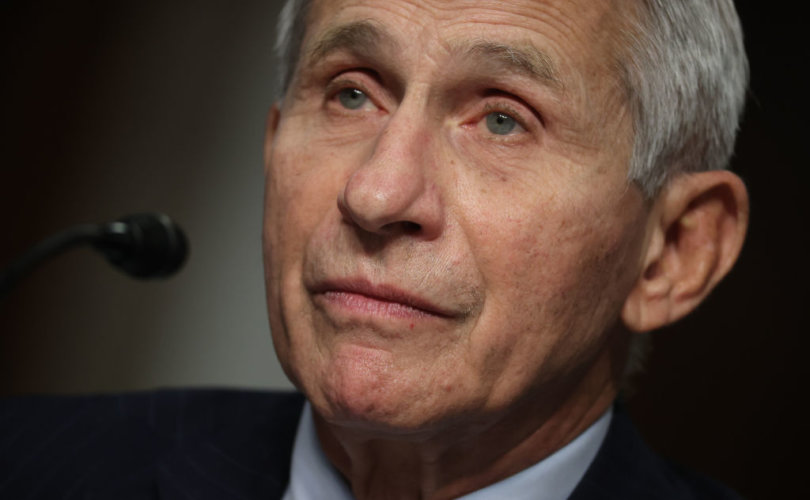 WASHINGTON, D.C. (LifeSiteNews) — Dr. Anthony Fauci’s testimony in a federal lawsuit that accuses U.S. government officials of colluding with Big Tech to censor speech, “confirmed” that “social media companies want to control not only what you think, but especially what you say,” Louisiana Attorney General Jeff Landry said on Tuesday.

Landry, along with Missouri Attorney General Eric Schmitt, have sued numerous federal government officials for working with Big Tech to suppress speech online, including criticism of the official government position on masks, vaccines, and other COVID policies.

The attorneys general released Tuesday the results of Fauci’s deposition, which him saying “I don’t recall” 174 times, according to Landry’s and Schmitt’s news release. The press statement also revealed that Fauci’s daughter worked at Twitter as a software engineer until last year.

Fauci testified that he had never personally contacted a social media company to ask for content to be taken down. However, Fauci and Facebook CEO Mark Zuckerberg had 13 different conversations during 2020, according to information obtained during the lawsuit process.

He also testified that he was aware of the “concept of freedom of speech.”

“Do you think that there should be steps taken to curb the spread of misinformation and disinformation?” an attorney asked Fauci.

“You know, that’s not my area. I’m very well aware of the concept of freedom of speech. The area of the curtailment of that is something that is not in my area of the expertise,” Fauci said. “Those are legal and other things. And I really don’t have any opinion on that.”

— Article continues below Petition —
Stand with faithful Archbishop Timothy Broglio as the NEW President of the United States Conference of Catholic Bishops!
Show Petition Text
10849 have signed the petition.
Let's get to 12500!
Thank you for signing this petition!
Add your signature:
Show Petition Text

Both Landry and Schmitt said the transcript reveals further details on the “COVID tyranny.”

“Missouri and Louisiana are leading the way in exposing how the federal government and the Biden Administration worked with social media to censor speech. In our deposition with Dr. Fauci, it became clear that when Dr. Fauci speaks, social media censors,” Attorney General Schmitt said. “I encourage everyone to read the deposition transcript and see exactly how Dr. Fauci operates, and exactly how the COVID tyranny that ruined lives and destroyed businesses was born.”

WATCH: ER doctor exposes the fraud of ‘Fauci medicine’ and the lies behind the COVID pandemic

“Fauci’s recent deposition only confirmed what we already knew: federal bureaucrats in collusion with social media companies want to control not only what you think, but especially what you say,” Landry said. “During no time in human history was this more obvious than during the COVID-19 crisis where social engineering tactics were used against the American public, not to limit your exposure to a virus, but to limit your exposure to information that did not fit within a government sanctioned narrative.”

🚨BREAKING: Here is the full transcript of the Anthony Fauci deposition: https://t.co/IN3pjYcK2m

“Fauci sent a colleague an email in February of 2020 instructing her not to wear a mask when traveling. Just a couple months later, he was advocating for universal mask mandates,” Schmitt noted on Twitter, in a thread that included highlights from the deposition.

“One of Fauci’s deputies joined a WHO delegation to China in February of 2020, and in talking to Fauci afterwards, was impressed with how the Chinese ‘were handling the isolation, the contact tracing, the building of facilities to take care of people,'” Schmitt wrote.

As Fauci testified, the idea for strict lockdowns came from how he perceived China handled the outbreak of COVID.