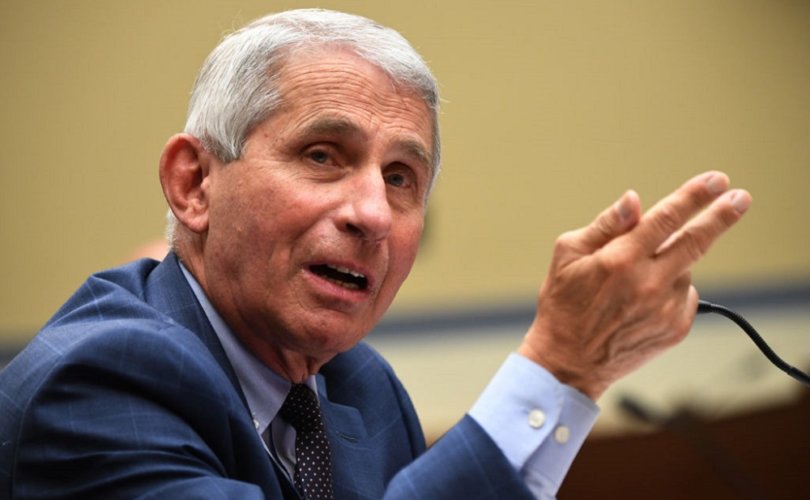 September 22, 2020 (American Thinker) — Dr. Anthony Fauci has been hailed in the press as the nation's top infectious disease expert.  He's been feted with presidential honors and high praise for his medical acumen.  His policy disagreements with President Trump, supposedly as the voice of “science,” have made him a hero on the left.  Such laurels and the implied power conveyed have led to some weird side-effects — such as his image featured on ladies' underwear and declarations that he's the sexiest man alive.

He's still being posterized on the left with calls to “Thank Dr. Fauci.”

But it's about time this idol topples, based on this summary about Fauci's startlingly bad medicine and bad medical policy on COVID, which has in fact cost thousands of lives.  And yes, he is very specifically to blame.

Virologist Steven Hatfill, writing in RealClearPolitics, summed up just how disastrous Fauci has been for America's COVID response, based on Fauci's suppression of evidence about hydroxychloroquine, the safest and most effective treatment for COVID based on all reputable studies, and the political power he's used to halt its treatment even as the rest of the world got well from the inexpensive medication's use.

The “Fauci Strategy” was to keep early infected patients quarantined at home without treatment until they developed a shortness of breath and had to be admitted to a hospital. Then they would they [sic] be given hydroxychloroquine. The Food and Drug Administration cluelessly agreed to this doctrine and it stated in its hydroxychloroquine Emergency Use Authorization (EUA) that “hospitalized patients were likely to have a greater prospect of benefit (compared to ambulatory patients with mild illness).”

In reality just the opposite was true. This was a tragic mistake by Fauci and FDA Commissioner Dr. Stephen Hahn and it was a mistake that would cost the lives of thousands of Americans in the days to come.

Other countries got well from COVID.  But America didn't.  America today is still floundering around on lockdowns, re-lockdowns, its schools shut, its election growing dubious.  And the persistence of the pandemic can directly be traced to the incompetent, bad medical decisions of Dr. Anthony Fauci, which have left America a COVID wasteland while the rest of the world got well.

America's death rate from COVID in fact is shockingly high, hitting 150,000 as of July 29, while other countries, which have also been hit by the pandemic, such as Singapore, Taiwan, South Korea, Turkey, Morocco, Malaysia, and Costa Rica, plus European countries such as Switzerland, have got the matter well under control, with no comparable death counts.  The difference is in their use of HCQ, or hydroxychloroquine.  And those are mostly well developed or high-middle-income countries.  What's really shocking is that third-world hellholes are doing better, too, if they can get their hands on and use HCQ.  The U.S., under Fauci, has been left in the dust.

Here in our country, Fauci continued to ignore the ever accumulating and remarkable early-use data on hydroxychloroquine and he became focused on a new antiviral compound named remdesivir. This was an experimental drug that had to be given intravenously every day for five days. It was never suitable for major widespread outpatient or at-home use as part of a national pandemic plan. We now know now that remdesivir has no effect on overall COVID patient mortality and it costs thousands of dollars per patient.

Hydroxychloroquine, by contrast, costs 60 cents a tablet, it can be taken at home, it fits in with the national pandemic plan for respiratory viruses, and a course of therapy simply requires swallowing three tablets in the first 24 hours followed by one tablet every 12 hours for five days.

There are now 53 studies that show positive results of hydroxychloroquine in COVID infections. There are 14 global studies that show neutral or negative results — and 10 of them were of patients in very late stages of COVID-19, where no antiviral drug can be expected to have much effect. Of the remaining four studies, two come from the same University of Minnesota author. The other two are from the faulty Brazil paper, which should be retracted, and the fake Lancet paper, which was.

Hatfill points out that media malfeasance, badmouthing the use of HCQ, is an important aspect of why Fauci has gotten away with such shockingly bad medicine.  The press loves Fauci, and Fauci knows how to use the press.  Against all evidence and study after study, the press continues to report HCQ as “dangerous” and patients are going without and dying as a result.  Hatfill writes:

This is ground-shaking news. Why is it not being widely reported? Why is the American media trying to run the U.S. pandemic response with its own misinformation?

The ultimate culprit here is Fauci.  Everyone else worldwide gets well, while here in the States, under his policy recommendations and touting of bad medicine, we continue to wallow in the pandemic, the bodies piling up.  Why isn't this ground-shaking news, too?  This isn't making America great again; this is New York's Gov. Andrew Cuomo seeding the nursing homes with COVID patients cubed, tremendously bad policy that is literally costing Americans their lives, and all for political purposes.

It's probably going to be hard for President Trump to find a way to fire this guy, but the picture emerging is extremely disturbing.  Fauci's suppression of hydroxychloroquine studies, his odd devotion to the new and profitable drug Remdesivir (which we have noted many NIH officials hold monetary stakes in), and Fauci's earlier papers from years back touting the importance of hydroxychloroquine on other kinds of COVID viruses paint a damning picture of what is going on, a horrible confluence of financial interests and a desire to extend the pandemic to Get Trump at a huge cost of lives.  It's time to start thinking about how to get him out of there, fire him, bring in someone serious about using the widely known global knowledge about HCQ who's willing to move on it.  This much incompetence is doing tremendous damage to President Trump and American people, both lives and economy.  Get him out of there, he now stands exposed as a complete incompetent and has got to go.  If Harry Truman could fire the vaunted Douglas MacArthur, Trump can fire Fauci, too.

This article originally appeared at the American Thinker on August 7, 2020. It is published here with permission.