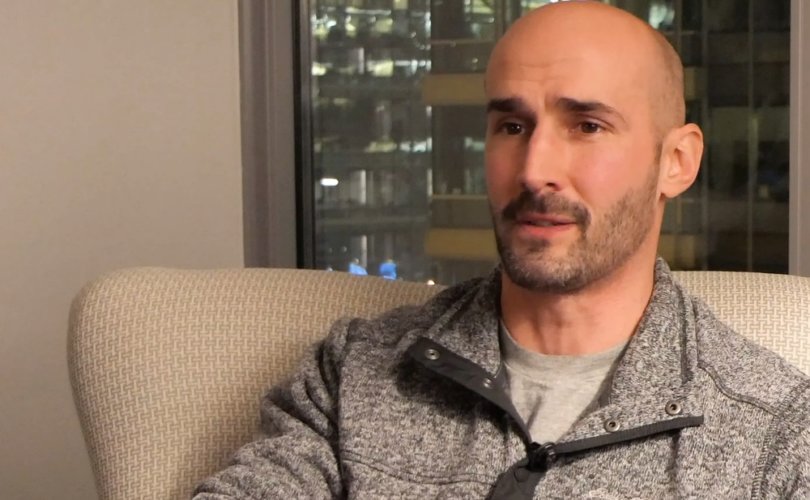 January 20, 2021 (LifeSiteNews) – The FBI arrested a man who entered the U.S. Capitol building on Jan. 6 and who told LifeSiteNews about his experience hours after it happened. His video interview quickly went viral. It has been viewed over 2.2 million times as of press time.

Leo Kelly, 35, was arrested in his hometown of Cedar Rapids, Iowa on Jan. 18. He was charged with knowingly entering a restricted building without lawful authority and with “violent entry with intent to disrupt the orderly conduct of official business and disorderly conduct on Capitol grounds.”

Kelly made a scheduled appearance at the Cedar Rapids Federal Courthouse yesterday. He had no attorney lined up to represent him. On January 14, Kelly had contacted a Deputy U.S. Marshal, an acquaintance of his, and said he would turn himself in if an arrest warrant was issued for him.

During the interview, Kelly related how on Jan. 6 he had listened to then-President Donald Trump’s speech at the Ellipse in front of the White House before making his way with fellow marchers down Pennsylvania Avenue toward the Capitol building. During his speech, Trump did not tell his supporters to break into the Capitol but asked them to go to the Capitol and “try and give… our Republicans, the weak ones… the kind of pride and boldness that they need to take back our country.”

Kelly said he “wanted to see what was going on” and “just kept climbing as far as I could.”

When asked what made him decide to go into the Capitol building, Kelly responded that he wanted to be part of a “moment in U.S. history.”

“I was like, there's something going on here. This is a moment in U.S. history that is not unlike the days of the beginning of the country.”

“At some point, there's enough illegal behavior and there's enough crimes against the Constitution being committed by the elected officials that, you know, what are you supposed to do, you know? Nobody in the courts will listen, they won't even take a look at the evidence. They just dismissed all the election fraud cases on grounds that there's no standing, or whatever,” said Kelly.

“So, you know, at some point you reach a point and you just say, ‘Well, none of my institutions are working. What am I supposed to do?’”

Kelly said he was in the building for between 30 to 60 minutes. He said he made it to the U.S. Senate floor where he said he prayed.

When asked how he felt about entering the Capitol building that day, Kelly said that he felt “conflicted.”

“You violate someone else’s space, you force your way into a building. In some ways, that really feels wrong. But whose space is that? That really does belong to us. That should only be an absolute last resort. You know, maybe we shouldn't have done that. But, it's just you come to the end of your rope and you say, What else am i supposed to do’ and you get swept up in a movement. And, there's a bunch of people, you know, running and doing this and it's just, all of a sudden, it's not the logical mind that's working anymore. You're just reacting to things and, finally, there's a chance that you can be heard and you can have your voice, patriotic voice for the constitution for the legitimacy of votes, [heard].”

“We took that chance. And, you know, God will judge us, you know, for what we did,” Kelly said.

“Perhaps I did something wrong, you know. I tried to be as respectful as I could while I was in there, you know, while still saying what I felt needed to be said.”

On Jan. 6, the day when Congress was scheduled to certify the Electoral College votes that had Joe Biden as frontrunner for the presidency, a number of violent people — including leftist activists — along with Trump supporters entered the Capitol building. There was destruction of property. There were five deaths connected to the event, including the shooting-death of Ashli Babbitt. One of those who died was a police officer. The riot in the Capitol building happened on the same day of a Save America Rally in Washington, D.C., where Trump addressed hundreds of thousands of his supporters. Trump and his administration condemned the violence . Video evidence continues to surface that leftist activists were part of the crowd that entered the Capitol building, bringing with them their own agenda of urging people to engage in unlawful acts of violence and destruction for their own political reasons.

The FBI has charged over 100 people for crimes committed at the U.S. Capitol in Washington on Jan. 6. One of the people arrested and charged for entering the Capitol building was Trump-hater and leftist activist John Sullivan, who filmed Babbitt’s death and then immediately tried to use her death, according to his own video evidence, to manipulate the crowd to turn against the police. CNN’s Anderson Cooper interviewed Sullivan that same day, introducing him as a “left-wing activist.”

Kelly told Cedar Rapids’s The Gazette in a Jan. 11 interview that he did not believe at the time that he was part of a violent mob.

Kelly said that he would accept the consequences of his actions.

“If the FBI or whoever calls me — I mean, they know where to find me, I’m sure — I’ll talk to them,” said Kelly, adding: “I understand there could be consequences for what happened and I will accept those and deal with them.”