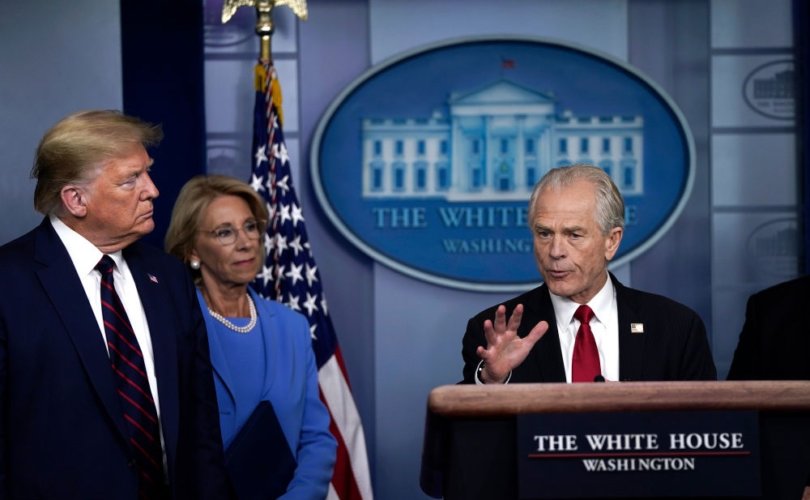 White House Trade and Manufacturing Policy Director Peter Navarro speaks during a briefing on the coronavirus pandemic in the press briefing room of the White House on March 27, 2020 in Washington, DC. Photo by Drew Angerer/Getty Images

WASHINGTON, D.C. (LifeSiteNews) — Former top Trump adviser Peter Navarro was arrested by the FBI on Friday for refusing to testify before the Democrat-led January 6 Committee, just hours after vowing to fight the charges, and a single day after promising to help the House GOP impeach U.S. President Joe Biden.

Indicted on contempt charges, Navarro “said in court he wants to represent himself without a lawyer,” and has “accused prosecutors of ‘hard-ball’ tactics by not letting him make a phone call,” according to a Twitter thread posted by CNN White House correspondent John Harwood.

Navarro, who previously explained that the intent of the January 6 protest was to peacefully encourage Congress and Vice President Mike Pence to reject certification of election results contested by the Trump campaign, was reportedly detained by federal authorities while on his way to film a TV interview in Nashville, Tennessee.

The arrest came just hours after the former Trump aide was indicted on charges of contempt of Congress for refusing to testify before the highly-partisan January 6 Committee, assembled last year to legitimize claims regarding the so-called “insurrection” at the U.S. Capitol in 2021.

NOW – Former Trump adviser Peter Navarro: “They put me in handcuffs, they bring me here. They put me in leg irons. They stick me in a cell.”pic.twitter.com/x5X8zojldy

According to the Associated Press, Navarro “vowed to contest” the charges before being taken into custody.

In an initial court appearance, Navarro blasted the Biden administration’s Justice Department for committing “prosecutorial misconduct,” stating that he was told he could not communicate with anyone after being placed in handcuffs by an FBI agent at the airport en route to Nashville.

“Who are these people? This is not America,” he said, noting that he “was a distinguished public servant for four years.”

The New York Post noted that Navarro is one of a few other Republicans affiliated with Trump who have invoked executive privilege to keep their communications with the former president confidential.

The executive privilege claims, however, have been rejected by the Biden administration.

Two other former aides, Dan Scavino and former Chief of Staff Mark Meadows, have also refused to appear before the January 6 Committee, but notably have not been indicted by the FBI.

Breitbart pointed out that Navarro’s arrest also came just a day after he told MSNBC that he planned to work with House Republicans to pursue the impeachment of President Joe Biden if Republicans win back Congress in the 2022 midterms.

Navarro told MSNBC’s Ari Melber he would move to impeach Biden over his handling of the conflict in Ukraine, the U.S.-Mexico border, and “all manner of things he is guilty of.”

RELATED: Could Joe Biden be impeached for ‘treason’ at America’s southern border?

During the interview, Navarro defended plans to subpoena Biden’s senior staff against Melber’s claims that Navarro wanted to jail his political opponents.

“I will push as hard as I can to use the same BS that the Democrats are using now to try to put me in prison for standing up for principles,” he said. “They want to play that game, we’ll play it right back. They hit us, we hit ‘em back hard.”

Meanwhile, less than a week before his arrest, Navarro had filed a federal lawsuit against the January 6 Committee for allegedly violating the separation of powers doctrine by “acting as judge, jury, and executioner.”

The January 6 Committee is set to launch six “prime-time” hearings beginning June 9 and extending until the end of the month, in which they will reportedly disclose “previously unseen material.” It’s unclear whether footage appearing to show law enforcement officers opening doors and beckoning protesters to enter the Capitol will be shown during the hearings.

Conservatives have slammed the Committee for broadly characterizing Republicans and those who contest the results of the highly irregular 2020 election as “insurrectionists” and “threats to democracy.”