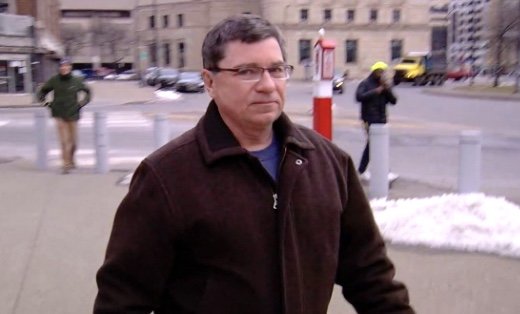 Dr. Paul J. Lubienecki, 62, is also alleged to have threatened diocesan whistleblower Fr. Ryszard Biernat and to have told Bishop Richard Malone’s former secretary Siobhan O’Connor that he hoped she would burn in hell.

Lubienecki was arrested by the FBI yesterday morning and appeared in a Buffalo courtroom yesterday afternoon. He has now been charged with cyberstalking. According to Specht’s employer WKBW, the lecturer faces five years in prison if found guilty.

Lubienecki teaches at both Christ the King Seminary and SUNY (State University of New York) Fredonia. He received a Ph.D in History in 2013 from Case Western Reserve University in Cleveland, Ohio, and his specialty is the Catholic labor movement.

O’Connor told LifeSiteNews that the FBI had advised the victims not to “make any formal comments on the matter.” But on Facebook, both she and Fr. Biernat thanked well-wishers and expressed gratitude to the FBI.

“Very grateful that Charlie and his family can be at peace tonight,” O’Connor wrote yesterday.

Biernat added, “I really feel bad for Mr. Specht and his family. He was giving a voice to so many victims, and what he gets in return is death threats.”

O’Connor described the saga as “crazy beyond the realm of fiction.”

Specht told LifeSiteNews that the only comments he is allowed to make can be found in the WKBW story published yesterday.

For more than a year, Specht was WKBW’s lead reporter on the Buffalo diocese clerical sexual abuse and cover-up crisis. In the summer of 2018, O’Connor, distressed by Bishop Malone’s mishandling of the crisis, leaked confidential diocesan documents to Specht a week before she resigned as Malone’s secretary. A passionate advocate for victims of clerical abuse, O’Connor called upon Malone to resign. She was joined by her friend and fellow diocesan secretary, Fr. Ryszard Biernat, who accused Malone of inaction regarding the sexual harassment of a seminarian by a diocesan priest.

Not everyone was grateful for the spotlight that Specht, O’Connor, and Biernat shone on the embattled diocese. According to a sworn affidavit to a Buffalo court by FBI special agent Randal E. Garvey, Specht began to receive harassing phone calls from numbers associated with Lubienecki in August 2019. Among the messages were such sentiments as “Nice going, a*******, you’re a real fraudulent reporter” and “So Malone is still bishop … and you’re still a bad Catholic and a horrible reporter.”

O’Connor and Biernat also received anonymous messages on December 4. The caller told Biernat that, among other things, “you destroyed a good bishop, a good man. You must be proud of being such an a******. Leave the priesthood or we’ll get you.” In his rant against O’Connor, the caller said that “you got rid of a good man. I love the bishop and now you got rid of him. Such an a******.  I hope you burn in hell.”

On February 4, it was announced that Christ the King Seminary would close. Specht received a new message that day ― and this one contained a death threat.

“You must be so happy the seminary’s closing,” the caller said. “I know where you live (…). You’re a bad person. I’m going to find you. I’m going to kill you.”

Specht reported the call to police. According to Special Agent Garvey’s affidavit, the reporter had advised him that “based on the multiple voicemail messages he has received, (Specht) is in fear for his life and has suffered substantial emotional distress.” According to WKBW, its parent company had arranged for Specht, his wife and his children to move from their home to an “undisclosed location with around-the-clock protection from a private security firm.”

The 7 Eyewitness News reporter told WKBW, “We were shocked, surprised and scared.”

“I got the feeling that this one person ― whoever they were ― had spent months harassing me about really personal things, and was now threatening violence,” he continued.

“I wanted my family to be safe. We put our trust in law enforcement to find out who was doing this.”

Garvey told the court that he believes Lubienecki is the culprit because of phone records linking the professor to the messages and also the similarity of Lubinecki’s voice in a public speech he gave to the voice in the messages.

According to WKBW, Specht discovered the identity of the man police suspected was his harasser only after Lubienecki’s arrest yesterday. The reporter expressed both his gratitude to the legal authorities and explained where criticism of the press should end.

“We are grateful that federal prosecutors and the FBI made this a priority,” the reporter said.

“Criticism of news reporting is acceptable and even welcomed. But making personal threats against a reporter for simply doing his job goes against the entire American belief in a free press.”

Lubienecki did not give a statement to the media when he left the courthouse yesterday afternoon. When 7 Eyewitness News reporter Eileen Buckley asked him if he had anything to say, he retorted, “You can’t get near me ― you know that?”

“Why would you make a threat to somebody, especially to kill them?” Buckley asked.

“Isn’t that against the teaching of the Catholic faith?”

The Diocese of Buffalo has released a statement by Bishop Edward B. Scharfenberger, the diocese’s temporary apostolic administrator, condemning the abuse of journalists.

“There is no place — nor should there be any tolerance — for threats or harassment towards members of the news media or any one else,” Scharfenbeerger said via Twitter.

“This is against who we are as Christians, but also against our nation’s founding principles that guarantee freedom to the press and freedom of speech,” he continued.

“As a Church, we must be able to withstand the glaring light of scrutiny — even as we seek to pierce the darkness with our own light, demonstrating Christ’s abundant love, forgiveness and care for us all.”

“As journalists, we know when we hold the powerful accountable for decisions that have damaged our community there is the possibility of backlash,” he said.

“We want to thank the FBI for its thorough investigation and swift action. Our employees’ safety is our priority.”

LifeSiteNews has reached out to Dr. Lubienecki but has not yet received a response.