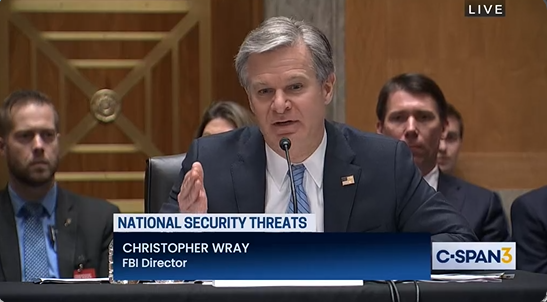 (LifeSiteNews) — The FBI director announced this week that nearly 70% of abortion-related violence after the U.S. Supreme Court’s Dobbs decision was targeted against pro-life centers.

Christopher Wray spoke briefly about the attacks that have taken place across the country in the wake and aftermath of the Court’s ruling on abortion during a Senate Homeland Security Committee hearing earlier this week.

Florida Republican Sen. Rick Scott began the dialogue about the attacks by saying, “It appears that the DOJ [Department of Justice] have become politicized with regard to pro-life things. There’s a recent rise in high-profile FBI investigations of pro-life Americans, which raises the current concern that the FBI is weaponizing federal law enforcement and becoming a partisan tool.”

“We’ve had numerous fire bombings, violent attacks, acts of vandalism against churches, pro-life organizations, and crisis pregnancy centers in the days following the leak of the Dobbs opinion. Is this right? Is it happening?”

“I’m glad you raised this topic, because it gives me an opportunity to speak to it,” Wray replied. “You might be interested to know that since the Dobbs Act decision, probably in the neighborhood of 70% of our abortion-related violence cases or threats cases are cases of violence or threats against pro-life, where the victims are pro-life organizations.”

“I don’t care what side of the issue you are on; you don’t get to engage in violence,” he continued. “We are equal opportunity when it comes to that.”

Wray expressed confidence that “the FBI is going about its work and doing the right thing in the right way” in response to the numerous incidents of pro-abortion attacks, many of which received little to no coverage from mainstream media.

The federal agency is reportedly addressing the attacks “through our Joint Terrorism Task Forces, through our criminal authorities, FACE Act and things like that. We have about 20 field offices involved in this.”

“We take it very seriously and again, I don’t care whether you’re motivated by pro-life views or pro-choice [sic] views, you don’t get to use violence to express it.”

“If you are reading the press, you would think you guys are only going after pro-life groups, and not going after groups that attacked pro-life,” Scott challenged. “I’ve never understood this about the FBI and DOJ, that you guys aren’t more proactive about what you’re actually doing, because I’m pro-law enforcement, as you know, but I can’t defend you with no information.”

Wray explained that “discussing our investigations is based on rules and practices that are important to people having confidence in the integrity of our work … We have all been taught that we have to bite our lips and let the facts come out in the right way, through court proceedings.”

Although Wray spoke confidently about the work being done by the FBI, two more senators followed Scott’s example and challenged both the efforts of the federal agency and the director’s leadership.

“According to numerous whistleblowers who have come forward to members of this body [the Senate], to members of the House, the FBI has been sending more than — in one instance — a dozen armed agents to a rural Pennsylvania home of a Catholic pro-life demonstrator to arrest him at gunpoint in front of his children in early morning hours, despite the fact that he posed no risk of violence or threats and had previously offered to turn himself in,” Republican Sen. Josh Hawley of Missouri pointed out in reference to the raid on Mark Houck in September.

Additionally, Republican Sen. Ron Johnson of  Wisconsin noted the director’s lack of cooperation in addressing corruption issues within the organization and his uncertainty that Wray will change his leadership in the future.

Although the large majority of abortion-related attacks have been directed at pro-life and faith-based organizations, the FBI has said little regarding the progress of the investigations. In September, the agency announced that it had yet to make any arrests connected to incidents for which the pro-abortion extremist group Jane’s Revenge claimed responsibility. A month later, the FBI refused to say whether any arrests had been made.

In an unexpected move, the agency recently released part of a video and some photos from a firebombing attack on a pro-life center, announcing that those responsible could be charged with violations of the Freedom of Access to Clinic Entrances (FACE) Act.

Violence against pro-lifers 22 times higher than against abortion advocates since Roe reversal: data

Biden press secretary on persecution of pro-lifers: ‘Just not something I’m going to comment on’