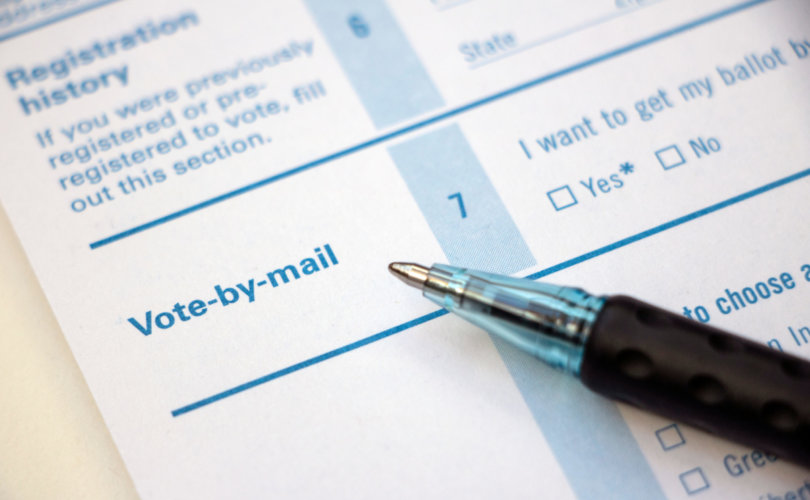 WASHINGTON, D.C., September 25, 2020 (LifeSiteNews) – The federal government, including the FBI, launched an investigation into several mail-in ballots that were found discarded in Luzerne County, Pennsylvania. At least seven of the nine votes were intended to be cast for President Donald Trump.

“At this point, we can confirm that a small number of military ballots were discarded,” the United States Attorney's Office for the Middle District of Pennsylvania, which is part of the U.S. Department of Justice, stated in a press release on Thursday. “Investigators have recovered nine ballots at this time. Some of those ballots can be attributed to specific voters and some cannot.”

“Since Monday, FBI personnel working together with the Pennsylvania State Police have conducted numerous interviews and recovered and reviewed certain physical evidence,” the statement continued. “Election officials in Luzerne County have been cooperative.”

While seven of the nine discarded ballots were confirmed to be Trump votes, the two remaining ones “had been resealed inside their appropriate envelopes by Luzerne elections staff prior to recovery by the FBI and the contents of those 2 ballots are unknown.”

Also on Monday, in Outagamie County, Wisconsin, three trays with mail, including mail-in ballots, were found in a ditch. “The United States Postal Inspection Service immediately began investigating and we reserve further comment on this matter until that is complete,” U.S. Postal Service spokesman Bob Sheehan said.

White House Press Secretary Kayleigh McEnany commented, “The president wants to get rid of mass mail-out voting … He’s said clearly that could go either way, it could damage either candidate's chances because it is a system that is subject to fraud.”

White House Press Secretary @KayleighMcEnany on mail-in ballots discarded in Pennsylvania, where 100% of them were cast for President @realDonaldTrump pic.twitter.com/TN8kA7mhha

Recently, judges in both the state of New York and the state of Washington said the U.S. Postal Service has to prioritize election mail.

On Monday, Judge Victor Marrero of U.S. District Court for the Southern District of New York ruled that “USPS will be required to treat all election mail as first-class mail or priority mail express, and that USPS will need to ‘pre-approve’ all overtime requests for the two weeks surrounding Election Day, to make sure absentee ballots are processed properly,” according to CNN.

“The right to vote is too vital a value in our democracy to be left in a state of suspense in the minds of voters weeks before a presidential election, raising doubts as to whether their votes will ultimately be counted,” the Judge pointed out.

Judge Stanley Allen Bastian of the U.S. District Court for the Eastern District of Washington commented in a decision issued last week that “voter disenfranchisement” was at the heart of a U.S. Postal Service’s recent change in policies.

“This is evident in President Trump's highly partisan words and tweets, the actual impact of the changes on primary elections that resulted in uncounted ballots, and recent attempts and lawsuits by the Republican National Committee and President Trump’s campaign to stop the States’ efforts to bypass the Postal Service by utilizing ballot drop boxes, as well as the timing of the changes,” Bastian wrote.

Both Marrero and Bastian were appointed to their positions by Democratic Presidents.

Meanwhile, the Associated Press (AP) reported on data it has obtained, showing “postal districts across the country are missing by wide margins the agency’s own goals for on-time delivery, raising the possibility that scores of mailed ballots could miss deadlines for reaching local election offices if voters wait too long. Missing a deadline is a key reason mail-in ballots get rejected.”

Voter rolls across the United States are notoriously unreliable, compared with other civilized countries in the Western world. The AP reported that in July an Atlanta resident received “a voter registration application addressed to Cody Tims — his cat, who died 12 years ago.”

The Secretary of State’s office explained that external groups “all over the country are targeting Georgia to help register qualified individuals. This group makes you wonder what these out-of-town activists are really doing. Make no mistake about it, this office is dedicated to investigating all types of fraud.”

“In the U.S., households do not vote but rather registered individuals do, including those living with other registered voters,” Reuters explained. “This same logic applies to those voting by mail.”

“Rochelle Rayray, one of the residents listed on these ballots, confirmed these letters were for her and her family, and that she has been trying to stop this mislabeled photograph’s circulation. She told Reuters her family doesn’t live at that address anymore, as the family sold the house, and she did not expect the new residents to share her personal details on social media.”

Reuters did not acknowledge that at least one of the recipients of the mail-in ballots was no longer living at the address, thus showing how unreliable voter rolls are. The news organization also failed to acknowledge that a dishonest person could have used the mail-in ballot mailed to the other person no longer living at the address to simply cast a vote.

President Donald Trump tweeted in June, “Because of MAIL-IN BALLOTS, 2020 will be the most RIGGED Election in our nations history – unless this stupidity is ended. We voted during World War One & World War Two with no problem, but now they are using Covid in order to cheat by using Mail-Ins!”

Donald Trump Jr., the President’s son, in August ridiculed the Democrats for arguing in-person voting is unsafe amid the coronavirus crisis while at the same time not cracking down on Black Lives Matter and Antifa protests and riots across the country.

Trump said that if “you can loot in person, you can vote in person,” adding, “I know someone who got four ballots to the same address, to their house, for people who no longer live there.”

He emphasized the distinction between absentee voting and universal mail-in voting.

“This is a system that’s worked well in Florida and many other states, but it’s tied to an individual with an actual form of identification to eliminate that fraud, and if you go through that process, we’re 100 percent fine with that for those that don’t necessarily want to go to the polling booth that day,” he explained. “It’s not that we’re trying to say you can’t do any of it.”