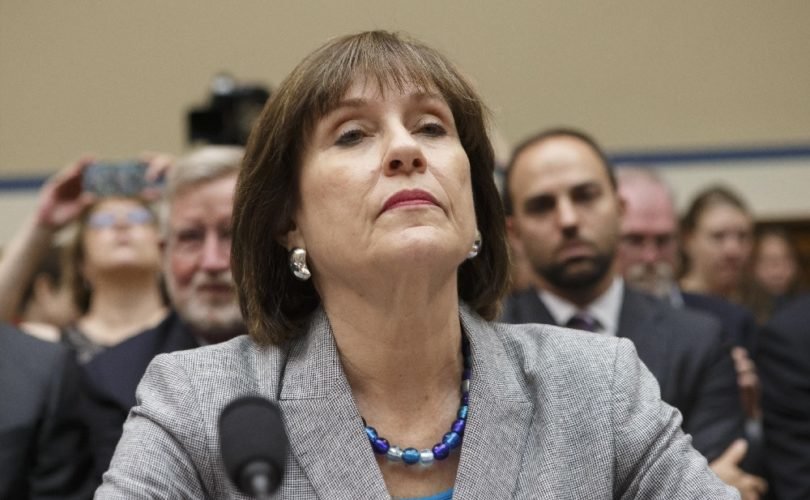 WASHINGTON, D.C., October 27, 2015 (LifeSiteNews) – The FBI said on Friday that former IRS agent Lois Lerner made errors in targeting pro-life and Tea Party groups for extra scrutiny and wait times – but her actions don't rise to the level of criminal activity.

Assistant Attorney General Peter J. Kadzik wrote that “ineffective management is not a crime” in a letter to the House Ways and Means Committee. “The Department of Justice's exhaustive probe revealed no evidence that would support a criminal prosecution. What occurred is disquieting and may necessitate corrective action – but it does not warrant criminal prosecution.”

Lerner was investigated for targeting Tea Party and pro-life groups for extra scrutiny as non-profits – including by asking one pro-life group for its prayers and demanding extra levels of released information from Tea Party groups. Lerner resigned shortly after the scandal went public, and she was given a full taxpayer-paid retirement pension.

One of the special investigators looking into Lerner's actions was an Obama donor, something that conservatives said indicated a lack of objectivity in the government's internal investigation.

The FBI's decision, which it said was based upon two and a half years of investigating – including interviews with over 100 people –  did not assuage conservatives, who hammered the Obama administration and its new attorney general, Loretta Lynch.

“The Thomas More Society's clients have experienced these injustices firsthand,” she continued. “In the Coalition for Life of Iowa's case, a hostile IRS agent told the organization's leadership they must refrain from 'picketing and protesting' outside of Planned Parenthood's local facility there, and she further inquired impermissibly about the group's prayers.”

“When confronted by the Society … the IRS agent quickly backed down and issued the Coalition's exemption ruling within days,” said Wagenmaker. “Other pro-life organizations experienced similar unjust treatment. In two separate pro-life exemption application cases, the IRS agent applied the long obsolete 'full and fair exposition' educational standard, requiring applicants to show how they educate listeners about both sides of abortion-related issues. Again, when confronted by the Society's legal counsel, the IRS quickly backed down and granted exemptions.”

An Investor's Business Daily editorial was likewise scathing regarding the decision, asking whether “anyone out there [is] subject to an Internal Revenue Service audit or a multiyear delay in approval for tax-exempt status who won't be concerned that the process is politically rigged against them[.]”

Ways and Means Committee Chairman Paul Ryan, R-WI, said in a statement that while the decision was “predictable coming from this administration, this news is still deeply disappointing.”

“The American people deserve better than this,” continued Ryan. “Despite the DOJ closing its investigation, the Ways and Means Committee will continue to find answers and hold the IRS accountable for its actions.”

“The fix was in: Lois Lerner will walk away scot-free,” a New York Post editorial declared in its first sentence.

And at The New American, Bob Adelmann said the decision “is called the 'Washington two-step' – a whitewash of the first order – which adroitly sidestepped issues such as Lerner's claim of innocence before the investigating committee and then pleading the Fifth Amendment for all those alleged charges she claimed she was innocent of. Little was mentioned of the convenient crash of her computer server, and less of the backup tapes that were destroyed before they could come to light under a subpoena from the committee.”

“Under Lerner's leadership, IRS officials enjoyed the discretionary ability to impose their own personal biases and animus against exemption applicants, in violation of their first amendment free speech and religious liberty rights,” summarized Wagenmaker. “Without the accountability that American citizens deserve, we most certainly cannot be assured that these problems won't happen again at the IRS.”