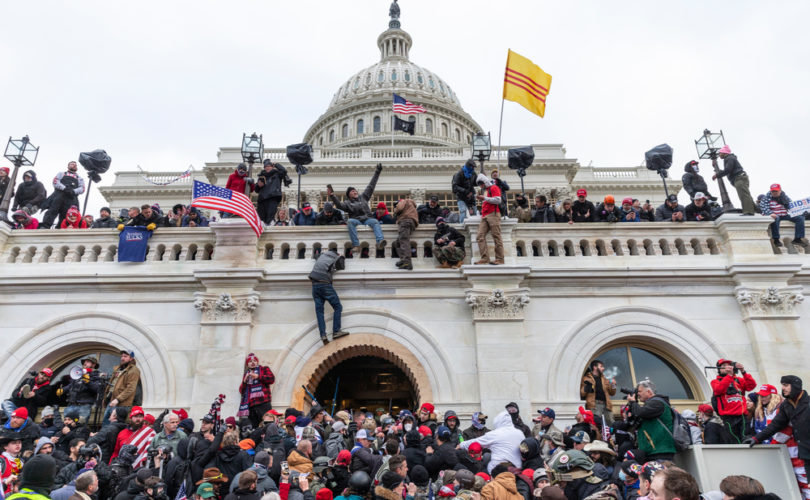 WASHINGTON, June 22, 2021 (LifeSiteNews) — According to a groundbreaking report by Revolver News, on which Fox News host Tucker Carlson relied for one of his shows last week, FBI operatives may have not only participated in the dubbed “insurrection” at the U.S. Capitol on January 6 — and sometimes violently — but had a role in actually organizing it.

In his June 15 broadcast Carlson summarized the findings of Revolver News while providing commentary on the ramifications.

Noting the contrast between the government’s posture of demanding openness regarding the events of January 6, and the same government’s concealment of so much, including the name of the law enforcement officer who shot Trump-supporter Ashli Babbitt and the “more than 10,000 hours of surveillance tape from the U.S. Capitol” never released, Carlson added that the “the government is hiding the identity of many [more] law enforcement officers who were present at the Capitol.”

“According to the government’s own court filings, those law enforcement officers participated in the riot, sometimes in violent ways,” explained the Fox News host. “We know that because, without fail, the government has thrown the book at most of the people who were in the Capitol on January 6. There was a nationwide dragnet to find them. Many of them are still in solitary confinement tonight.”

“But strangely, some people who participated in the riot haven’t been charged. Look at the documents. The government calls these people ‘unindicted co-conspirators.’ What does that mean? It means that in potentially every case, they’re FBI operatives,” he said.

Carlson went on to provide examples, including one “unindicted co-conspirator” referred to in the documents as “Person Two.” According to these filings, “Person Two stayed in the same hotel room as an ‘insurrectionist’ named Thomas Caldwell, who’s alleged to be a member of the group called the Oath Keepers. Person Two also ‘stormed the barricade’ at the Capitol on January 6, alongside Thomas Caldwell.”

“The government’s indictments further indicate that Caldwell — who, by the way, is a 65-year-old man — was led to believe there would be a ‘quick reaction force’ also participating on January 6,” Carlson continued. “That quick reaction force, Caldwell was told, would be led by someone called ‘Person Three’ — who had a hotel room and an accomplice with him.”

“But wait,” Carlson continued. “Here’s the interesting thing. Person Two and Person Three were organizers of the riot. The government knows who they are, but the government has not charged them. Why is that? You know why. They were almost certainly working for the FBI. So, FBI operatives were organizing the attack on the Capitol on January 6, according to government documents.”

In addition, Revolver News reported, “There are what appears to be upwards of 20 unindicted co-conspirators in the Oath Keepers indictments, all playing various roles in the conspiracy, who have not been charged for virtually the exact same activities — and in some cases much, much more severe activities — as those named alongside them in indictments.”

Carlson concludes, “So it turns out this ‘white supremacist insurrection’ was, again, by the government’s own admission in these documents, organized, at least in part, by government agents.”

Further supporting this conclusion was a statement by FBI Director Christopher Wray at a Senate committee hearing in March, indicating that infiltration of such groups which participated in the January 6 riot, would certainly be a very high priority for the federal law enforcement agency.

Carlson points out, “there’s a huge difference between using an informant to find out what a group you find threatening might do, and paying people to organize a violent action, which is what happened, apparently according to government documents, on January 6.”

“That’s a line, and the FBI has crossed it. And that’s not the first time they crossed that line,” he said. He went on cite the “plot to kidnap Gov. Gretchen Whitmer” last year, which he called “a farce,” where the charging documents reveal “nearly half the gang of kidnappers were working for the FBI,” including “the guy who suggested using a bomb to blow up a bridge as part of the plot” receiving significant media coverage.

Also mentioned was a book titled The Terror Factory, wherein the author “analyzed every terror prosecution from 2001 to 2013 … [and] found that at least 50 defendants were on trial because of behavior that the FBI had not only encouraged, but enabled.”

Another example includes a terrorist attack in Garland, Texas, in 2015, where it was clear an FBI agent helped facilitate a shooting spree which was luckily thwarted by local police before the gunmen could harm any innocents.

With regards to January 6 itself, J. Michael Waller, a senior analyst for the Center for Security Policy who specializes in “propaganda, political warfare, psychological warfare, and subversion,” was present in the pro-Trump crowd and wrote immediately after the event how the “deadly riot at the U.S. Capitol bore the markings of an organized operation planned well in advance of the Jan. 6 joint session of Congress.”

He describes the activities of “four separate cells or units” on the scene including “[p]lainclothes militants,” “[a]gents-provocateurs,” “[f]ake Trump protesters,” and a “[d]isciplined, uniformed column of attackers.”

Since, as a follow-up Revolver piece summarizes, “the leading planners and provocateurs of the 1/6 incursion weren’t the individuals who have been publicly charged with crimes, but the unindicted persons who were present at the Capitol alongside them,” leaving it questionable if the disturbance would have happened at all apart from “substantial agitation by federal law enforcement,” lawmakers are just beginning to demand accountability from the FBI.

Congressman Matt Gaetz of Florida responded to this report by sending a letter to Wray requesting information on the extent of infiltration by the federal government into primary militia groups, the numbers of “undercover agents or confidential informants” present at the Capitol on January 6, and the numbers of “unindicted co-conspirators” who worked as undercover operatives or confidential informants for the government.

Rep. Margorie Taylor Greene (R-GA) demanded answers on the same topic, while Rep. Paul Gosar (R-AZ) questioned Wray at a hearing and entered the Revolver report into the congressional record.

In a final statement at the conclusion of his interview with Carlson, Revolver’s Darren Beattie asked the following rhetorical question: “Does the national security apparatus do anything but conspire against the American people? I’m led to conclude that we cannot have a democracy, everything in our politics will be fake and performative, until we bring the national security state including the FBI to heel. It’s not a left issue. It’s not a right issue.”

“Every politician who cares about our country should demand a Church Committee 2.0,” he said, referring to a 1975 Senate committee that investigated abuses by various intelligence agencies and the IRS.

“Immediately,” Carson replied, “and people of good faith on the left should join it.”

In some videos, Capitol police appear to let protestors into US Capitol, pose for selfies