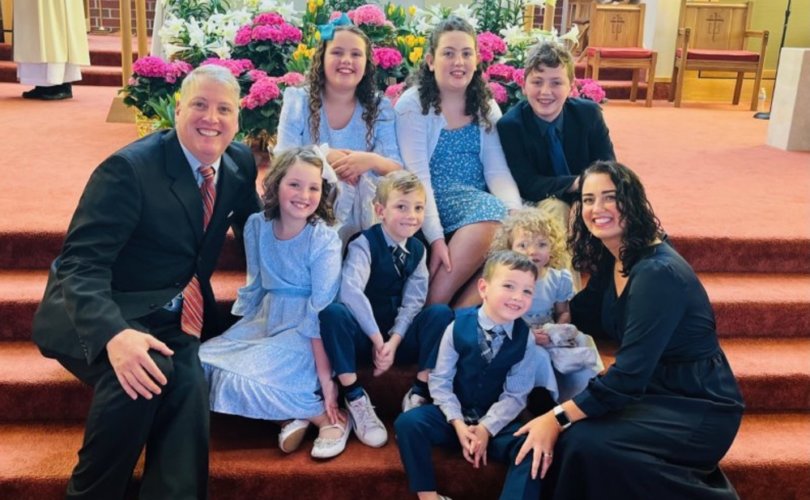 (LifeSiteNews) – A well-known pro-life author, sidewalk counselor, and father of seven was the latest victim of a U.S. Department of Justice-sponsored SWAT raid and arrest — for supposed “FACE Act” violations — at his rural home as his children looked on “screaming.”

Mark Houck is the founder and president of The King’s Men, which promotes healing for victims of pornography addiction and promotes Christian virtues among men in the United States and Europe.

According to his wife Ryan-Marie, who spoke with LifeSiteNews, he also drives two hours south to Philadelphia every Wednesday to sidewalk counsel for six to eight hours at two different abortion centers.

— Article continues below Petition —
Stand with Mark Houck, a pro-life Catholic dad of 7 raided by Joe Biden's FBI
Show Petition Text
8438 have signed the petition.
Let's get to 9000!
Thank you for signing this petition!
Add your signature:
Show Petition Text

Ryan-Marie, who is a homeschooling mother, described how the SWAT team of 25 to 30 FBI agents swarmed their property with around 15 vehicles at 7:05 a.m. this morning. Having quickly surrounded the house with rifles in firing position, “they started pounding on the door and yelling for us to open it.”

Before opening the door, she explained, her husband tried to calm them, saying, “‘Please, I’m going to open the door, but, please, my children are in the home. I have seven babies in the house.’ But they just kept pounding and screaming,” she said.

When he opened the door, “they had big, huge rifles pointed at Mark and pointed at me and kind of pointed throughout the house,” Ryan-Marie described.

When they came in, they ordered the kids to stay upstairs. “Our staircase is open, so [the kids] were all at the top of the stairs which faces the front door, and I was on the stairs as well, coming down.”

“The kids were all just screaming. It was all just very scary and traumatic,” she explained.

After asking them why they were at the house, the agents said they were there to arrest Mark. When Ryan-Marie asked for their warrant, “they said that they were going to take him whether they had a warrant or not.”

When Ryan-Marie protested, saying that is kidnapping, “you can’t just come to a person’s house and kidnap them at gunpoint,” they agreed to get the warrant for her from one of their vehicles.

At this point, Mark asked her to get him a sweatshirt and his rosaries, but when she returned, they already had loaded him into a vehicle.

They provided the first page of the warrant and said they were taking him to “the federal building in downtown Philadelphia.”

“After they had taken Mark, and the kids were all screaming that he was their best friend, the [FBI agents on her porch] kind of softened a bit. I think they realized what was happening. Or maybe they actually looked at the warrant,” Ryan-Marie explained. “They looked pretty ashamed at what had just happened.”

As a result, the homeschool mother said her kids were “really sad and stressed. So, I’ve already reached out to some psychiatrists or psychologists to try and help us through this. I don’t really know what’s going to come of it when you see guns pointed at your dad and your mom in your house when you first wake up in the morning,” she lamented.

The warrant charged Mark with violating the Freedom of Access to Clinic Entrances Act, due to a claimed “ATTACK OF A PATIENT ESCORT.”

Ryan-Marie stated this charge comes from an incident that had already been thrown out of the District Court in Philadelphia but was somehow picked up by Merrick Garland’s Department of Justice.

On several occasions when Mark went to sidewalk counsel last year, he took his eldest son, who was only 12 at the time, she explained. For “weeks and weeks,” a “pro-abortion protester” would speak to the boy saying “crude … inappropriate and disgusting things,” such as “you’re dad’s a fag,” and other statements that were too vulgar for her to convey.

Repeatedly, Mark would tell this pro-abortion man that he did not have permission to speak to his son and please refrain from doing so. And “he kept doing it and kind of came into [the son’s] personal space” obscenely ridiculing his father. At this point, “Mark shoved him away from his child, and the guy fell back.”

“He didn’t have any injuries or anything, but he tried to sue Mark,” and the case was thrown out of court in the early summer.

Since the Biden administration has taken power in January 2021, Garland’s Department of Justice and the FBI have committed dozens of SWAT team raids that have been characterized as a political “weaponization” of the federal agencies against pro-lifers, Trump supporters, conservative Christians, and medical freedom advocates.

For example, in contrast to left-wing rioters who caused enormous damage in cities across the nation in 2020, and the vandals who have attacked dozens of pro-life centers this year with little or no legal ramifications, the Department of Justice implemented the harshest of consequences for those they identified as having anything to do with the disturbance at the Capitol on January 6, 2021. These actions have included early morning SWAT team arrests, ransacked homes, confiscation of property, indefinite pre-trial solitary confinement without bail in a dedicated D.C. prison, significant physical abuse, and the violation of the Constitutional right to a speedy trial.

In March, the FBI rounded up 10 pro-life activists, including Joan Andrews Bell, with SWAT team raids that serve to intimidate and humiliate the accused through an exercise of excessive force.

A surfaced video of one of these raids shows armed agents holding pro-lifers at gunpoint and ordering them to put their hands up, drop to their knees and scoot backward out their front door in the middle of the night. The pro-lifers are respectful and compliant throughout.

After the FBI’s unprecedented August 8 raid on President Donald Trump’s Mar-A-Lago home, Florida Gov. Ron DeSantis called it “another escalation in the weaponization of federal agencies against the Regime’s political opponents.”

Soon after Joe Biden’s September 1 speech where he declared war on conservative Christians, dozens of Trump allies had their homes raided by the FBI, which Steve Bannon referred to as “a Gestapo tactic,” and said it was “all about intimidation.”

In response to the raid on the Houck residence this morning, however, local pro-life advocates don’t seem to be intimidated, but energized. In addition to sponsoring a fundraiser for this family, they will be holding a prayer rally at the “Philadelphia Women’s Center” abortion facility at 777 Appletree St. from 10:30 a.m. to noon on Saturday, September 24. All are invited to come and pray peacefully and make a financial donation as well.