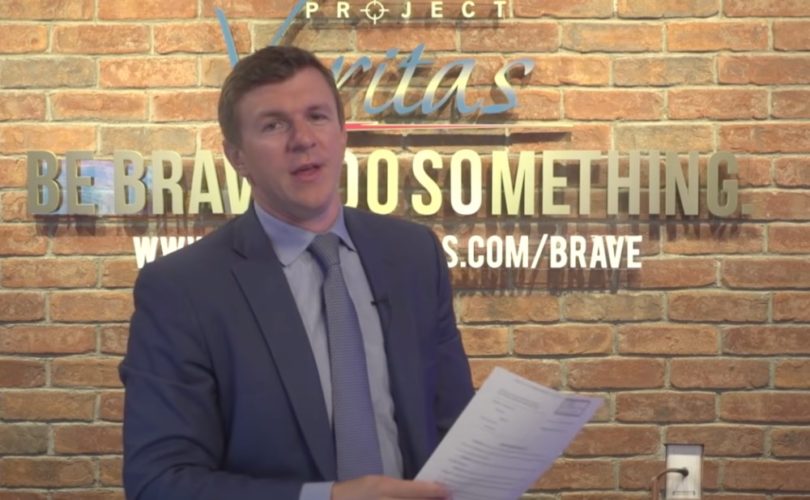 (LifeSiteNews) — Federal agents raided the homes of past and present journalists with the conservative Project Veritas this weekend, searching for a diary linked to the Biden family which Veritas founder James O’Keefe says his organization does not possess.

In a statement published on the group’s website, O’Keefe said Project Veritas was approached late in the 2020 presidential campaign with a source offering a diary supposedly owned by President Joe Biden’s daughter Ashley. Veritas could not confirm the authenticity of the book or its contents, he says, so they opted not to pursue the story and attempted to return the book, but an attorney for Ashley Biden declined to take it, which would have confirmed its authenticity. “Project Veritas gave the diary to law enforcement to ensure it could be returned to its rightful owner,” O’Keefe added.

“I awoke to the news that apartments and homes of Project Veritas journalists, or former journalists, had been raided by FBI agents,” O’Keefe said. “The FBI took materials of current, and former, Veritas journalists despite the fact that our legal team previously contacted the Department of Justice and voluntarily conveyed unassailable facts that demonstrate Project Veritas’ lack of involvement in criminal activity and/or criminal intent.”

O’Keefe also shared a quote from a grand jury subpoena Project Veritas received, which requested “that you voluntarily refrain from disclosing the existence of the subpoena to any third party” because “disclosure of the existence of this investigation might interfere with and impede the investigation.” O’Keefe said he believes “they don’t want me to defend myself.”

“But while the Department of Justice requested us to not disclose the existence of the subpoena, something very unusual happened,” he went on. “Within an hour of one of our reporters’ homes being secretly raided by the FBI, The New York Times, who we are currently suing for defamation, contacted the Project Veritas reporter for comment. We do not know how The New York Times was aware of the execution of a search warrant at our reporter’s home, or the subject matter of the search warrant, as a Grand Jury investigation is secret.”

An FBI spokesperson confirmed to the Associated Press that it had conducted “court authorized law enforcement activity” at a Manhattan apartment in Manhattan and another address in Westchester County, but declined to elaborate further. While the authenticity of the diary remains unconfirmed, the raid seems to suggest that the federal government takes the possibility seriously enough to pursue.

“Now, Ms. Biden’s Father’s Department of Justice, specifically the United States Attorney’s Office for the Southern District of New York, appears to be investigating the situation, claiming the diary was stolen,” O’Keefe declared. “We don’t know if it was, but it begs the question: in what world is the alleged theft of a diary investigated by the President’s FBI and his Department of Justice? A diary! This federal investigation smacks of politics. Project Veritas never threatened or engaged in any illegal conduct.”

Project Veritas, which specializes in undercover videos exposing various left-wing political and media institutions, has been a recurring target over the years of Democrats and their allies due to the revelations of its investigations, from the efficacy of the COVID-19 vaccines and radicalism in public education to election fraud in government agencies and partisan bias in mainstream media giants.