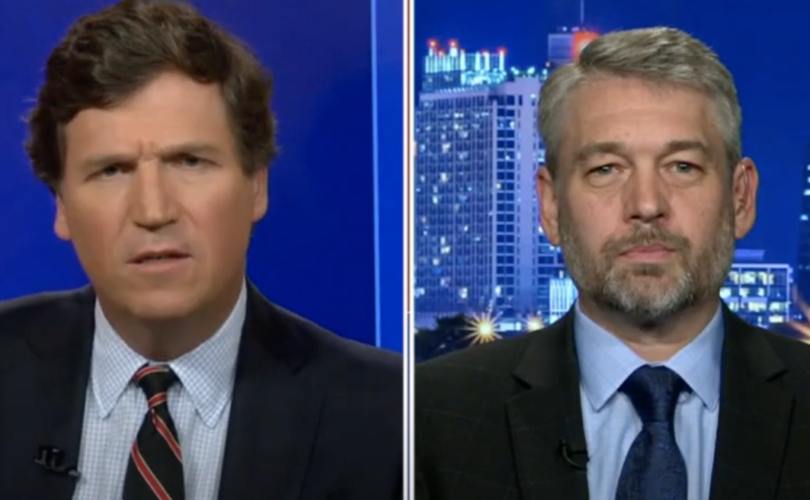 CENTERVILLE, Tennessee (LifeSiteNews) – The FBI raided the home of pro-life activist Paul Vaughn in front of his children and arrested him, charging him with “conspiracy against rights secured by the FACE Act, and committing FACE Act violations.”

Vaughn, the married father of 11 children, told the Daily Signal that the FBI came to his home in Centerville, Tennessee last week with “guns pointed at the door, banging on the house, yelling and screaming, ‘Open up. FBI.’”

“When I opened the door and saw the guns pointed at me, I asked them what they wanted, who they were looking for, and they said they wanted me,” Vaughn continued.

In an interview with Tucker Carlson on Monday, October 10, Vaughn told the Fox News host that when the FBI came to his house, some of his kids were just heading to the car to go to school. One of the FBI agents “goes to the kids and holds the kids with a long gun outside of my driveway and does not let them go into the house.”

“That is absolutely, as my wife said in the video, unacceptable,” Vaughn continued.

Video footage taken by Vaughn’s wife shows the FBI agents outside the family’s home. The mother of 11 children follows the agents while recording their conversation.

“I wanna know why you were banging on my door with a gun,” she said. “Are you not going to tell me anything?”

“No, we are not,” one of the agents replied, while another added, “I tried.”

Video of the FBI's arrest of Paul Vaughn of Centerville, Tennessee. DOJ charged him with “conspiracy against rights secured by the FACE Act, and committing FACE Act violations" for blocking the entrance to an abortion clinic. Paul tells me the footage was taken by his wife. pic.twitter.com/KSDvLRSrlF

— Article continues below Petition —
Stand with Mark Houck, a pro-life Catholic dad of 7 raided by Joe Biden's FBI
Show Petition Text
8427 have signed the petition.
Let's get to 9000!
Thank you for signing this petition!
Add your signature:
Show Petition Text

Vaughn is one of the 11 pro-life activists who were hit with federal charges this week for their involvement in a peaceful 2021 pro-life rescue at a Nashville, Tennessee abortion facility, which has since been forced to stop committing abortions to comply with current state law.

However, video footage along with local reporting at the time indicate the pro-lifers were engaged in peaceful protest.

If convicted, the pro-life advocates charged with conspiracy, including Vaughn, could face up to 11 years in prison and as much as $250,000 in fines

Carlson said in his interview with Vaughn that the Department of Justice (DOJ) is claiming that the 55-year-old father is a “violent extremist who is a physical threat to others.” Vaughn responded by saying that these claims are “made up” and “used to justify” to “go after peaceful people who disagree with them politically.”

When asked by the Fox News host about what his children thought about the incident, Vaughn said that they are “trying to work through what happened.”

“Fortunately, we do a lot of studying about historic Christianity and missionaries in the past” who faced “persecution,” he continued.

“So they are familiar with stories, they know people have been martyred throughout history, they know they’ve been persecuted and picked on by bully tyrants in other parts of history just like they are being in America today,” Vaughn stated.

The news of yet another FBI raid on the home of a pro-life father comes amid a wave of federal indictments against pro-lifers under the radical pro-abortion Biden administration, including the dramatic arrest of Catholic pro-life activist Mark Houck by heavily-armed FBI agents last month.

Houck, like Vaughn, is the father of a large family – in Houck’s case, with seven children – who was arrested in front of kids for a relatively minor incident that happened more than a year ago.

When the Daily Signal asked Vaughn about the parallels between him and Houck, the father of 11 replied: “Is it against the odds that two large families would be attacked in two weeks? Versus smaller families that are active in pro-life work?”

“What I told the agents that arrested me on the ride into town since we had a nice hour of fellowship, is that it’s a beautiful tactic,” he explained. “If you want to suppress free speech and you want to strike fear and intimidation into opposition and you weaponize justice to go after someone, to suppress, if you can get a large family, you get all the children.”

“And all the children have this memory growing up of the big, bad agents banging on the door and taking away dad. And they have an innate sense of fear now that they have to overcome in their life to oppose anything that is put upon them,” Vaughn added.

Carlson blasted the Biden administration’s DOJ in his show on Monday for its double standard, as the arrested pro-lifers face longer prison sentences than criminals who burned down buildings.

The primetime host mentioned a case from Buffalo, New York in June where a pro-life pregnancy service center was firebombed and no arrests had been made.

“All of those crimes, and countless others, that are happening on a scale that we have not seen in our lifetime are treated as less serious offenses than a man who sang hymns in an abortion clinic,” the Fox News host pointed out.

“See how this works,” Carlson added.

“A group aligned with Joe Biden firebombs a building and the FBI does nothing. Instead, they send agents with automatic riffles to the home of a 55-year-old man with 11 children because he sang hymns in an abortion clinic.”

“In America in 2022 whether you are dangerous or not depends almost entirely on who you voted for,” the Fox News host declared in another part of his show.

“This is intentional, it’s right in our face, and it is completely unacceptable,” he added.

“These are political raids, and they are exactly what the most recent FBI whistleblower Steve Friend warned about last month.”

Friend said that a SWAT raid in August 2022 on a suspect in Jacksonville, Florida, in the context of the January 6th investigation, violated both FBI policy as well as the suspect’s rights under the Sixth and Eighth Amendments of the U.S. Constitution (regarding a fair trial and cruel and unusual punishment).

Friend, who has since been suspended by the FBI, had refused to take part in the Jacksonville raid against a suspect who was only accused of a misdemeanor on moral and constitutional grounds.