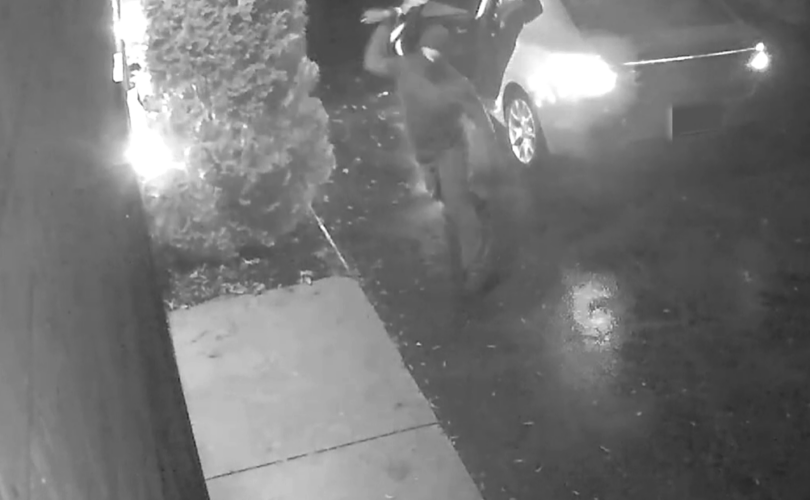 (LifeSiteNews) — The Federal Bureau of Investigation (FBI) recently released part of a video and some photos from a firebombing attack on a pro-life pregnancy center and announced that those responsible could be charged with violations of the Freedom of Access to Clinic Entrances (FACE) Act.

CompassCare Pregnancy Services in Buffalo, New York was firebombed in June, one of many attacks where responsibility was claimed by the pro-abortion extremist group Jane’s Revenge.

In addition to the photos and video, the FBI also issued a statement asking for information and “offering a reward of up to $25,000 for information leading to the arrest and conviction of the persons responsible for the arson.”

The statement explained that “at approximately 2:45 a.m., the Amherst Police Department received a 911 call regarding a fire at the CompassCare Center. Individual(s) had thrown Molotov cocktails at the Center. This started a fire that caused significant damage. One of the individuals spraypainted the words ‘Jane was here’ on the building.”

The video, which is only 18 seconds of the one minute and 30-second footage, shows two masked individuals and their car, a suspected Dodge Dart sedan. One individual can be seen standing by the open trunk of the car, which is filled with unidentified objects. He then returns to the driver’s door.

In the next section of the edited clip, a second individual runs up to the clinic and smashes a window. The third section shows the same person throwing an object, presumably the Molotov cocktail, through the broken window and rushing back into the car.

Four photos were also released to the public. Two are of the first individual in the video, one from the front and the other from the back. Another shows the second suspect, and the fourth picture is an image of the vehicle.

The release of the footage and photos comes months after the historic Dobbs ruling and after a lawsuit filed by the organization’s CEO Jim Harden. He sued the local police for failing to return the surveillance footage, an act that he suspected as political bias on behalf of the FBI, as previously reported by LifeSiteNews.

A November 14 Twitter post from CompassCare quoted Harden as saying, “The FBI posting comes less than a week after the midterm elections. Let’s not be too hasty to sing the praises of the FBI. This may be nothing more than an attempt to appear evenhanded.”

“The FBI posting comes less than a week after the midterm elections…. Rev. Harden said, ‘Let’s not be too hasty to sing the praises of the FBI. This may be nothing more than an attempt to appear evenhanded…'”https://t.co/rcem4SPaLo#compasscare #prolife #abortion #midterms pic.twitter.com/RR53dLDkGq

Another post continued his skeptical thoughts on the actions of the FBI. He stated that “if the FBI is serious about finding the perpetrators, they will offer a $25K reward for each of the 150 pro-life organizations that have been attacked—3.75 million dollars.”

Rev. Jim Harden: If the FBI is serious about finding the perpetrators, they will offer a $25K reward for each of the 150 pro-life organizations that have been attacked—3.75 million dollars. #ProLife #CompassCare #FBI @Rev_Jim_Harden pic.twitter.com/LycEyBkVEY

During the weeks leading up to and following the Dobbs decision, pro-life pregnancy centers were consistent targets of violence from pro-abortion activists, with little response from federal law enforcement. In June, the FBI confirmed that it had launched an investigation into the pro-abortion attacks, but has yet to announce any arrests related to the case.

In September, the organization did release a statement declaring it had not arrested anyone in attacks specifically made by Jane’s Revenge.

The potential FACE charges come as a surprise after several radical moves to detain pro-life advocates under the same act, including a September raid on author and father of seven Mark Houck and the similar arrest of another pro-life husband and father a few weeks later.

Last week, LifeSiteNews reported that 26 pro-lifers have been charged by federal law enforcement, and none of the attacks on pro-life centers have been resolved.