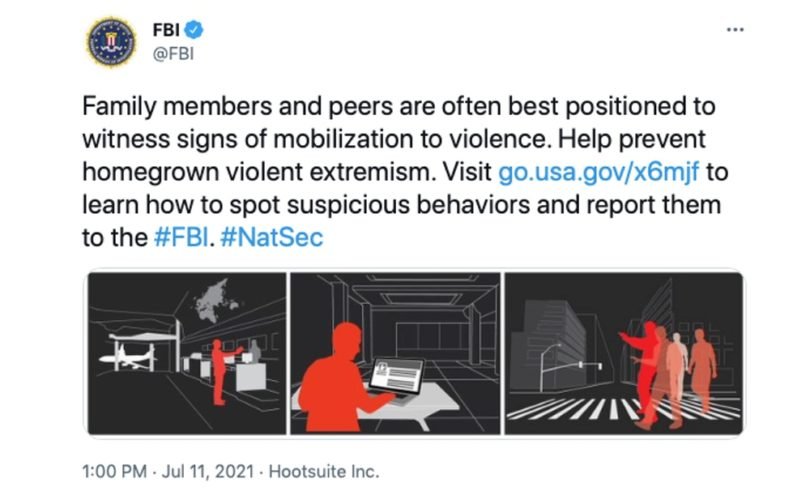 July 13, 2021 (LifeSiteNews) — The Federal Bureau of Investigation (FBI) posted a tweet Sunday directing Americans to resources to learn how to identify “extremism” in family members and peers and to report their loved ones to the FBI.

The federal agency’s message tells Americans they are “best positioned” to identify “signs of mobilization to violence” in family members and peers and can help “prevent homegrown violent extremism.”

The tweet directs Americans to view an online government booklet to learn “how to spot suspicious behaviors and report them to the FBI.”

The booklet linked in the tweet was originally written in 2015 and most recently updated in 2019. Created in a combined effort between the National Counter-Terrorism Center (NCTC), FBI, and the Department of Homeland Security (DHS), the document primarily focuses on the threat of violent extremism from terrorists associated with Isis or other radical Islamic terror groups.

It is unclear whether the document will be updated to include descriptions of the new groups which the Biden administration has declared pose the greatest terror threat in the United States today.

The Biden administration has further declared domestic terrorism “the most urgent terrorism threat” in the U.S., referring to an unclassified report from the Office of National Intelligence published in March which states that “perceived government overreach will almost certainly drive DVE [domestic violent extremist] radicalization and mobilization to violence.”

“[N]arratives of fraud in the recent general election, the emboldening impact of the violent breach of the US Capitol, conditions related to the COVID-19 pandemic, and conspiracy theories promoting violence,” the report claims, “will almost certainly spur some DVEs to try to engage in violence this year.”

According to the “Homegrown Violent Extremist Mobilization Indicators” booklet linked in the FBI’s tweet, behaviors considered concerning and potentially worthy of being reported to the federal government include writing posts on social media, sending tweets, or using hashtags using terminology allegedly associated with a violent ideology.

In addition, using encrypted media apps and software, engaging in physical or weapons training, and harboring an “us vs. them” mentality are also signs which could point toward “mobilization to violence,” according to the booklet.

“We are all in this together,” the document states. “We continue to see that members of the community—such as family members and peers—are often best positioned to witness signs of mobilization to violence. Such community members almost always are the first to detect hints that an individual may be considering violent action in the Homeland or overseas.”

While acknowledging “that many of the indicators described herein may involve constitutionally protected activities and might be insignificant on their own,” the booklet alleges that “when observed in combination with other suspicious behaviors, these indicators may raise suspicion in a reasonable person and constitute a basis for reporting.”

The booklet further encourages Americans “to contact law enforcement if, based on these indicators and the situational context, they suspect an individual is mobilizing to violence.”

Many prominent conservatives have reacted strongly against the FBI’s message, arguing that it blatantly encourages Americans to spy upon one another and mirrors the actions of Communist regimes.

This is outrageous. The @FBI has a growing credibility problem and this type of sinister snitching is clearly unhelpful.

Senator Ted Cruz (R-TX), whose father fled from Communist oppression in Cuba, remarked, “In both Cuba & China, they also ask children to spy on their parents….”

In both Cuba & China, they also ask children to spy on their parents…. https://t.co/ss9TKNEBlz

The FBI’s message comes just weeks after the Biden administration unveiled its four-pillar plan to counter “domestic terrorism,” calling for Americans to report friends, family members, and coworkers they perceive to be “radicalizing.”

As previously reported by LifeSiteNews, the second pillar of the strategy positions “domestic violent extremism as a national priority,” allocating $77 million in grant money to address the threat. The pillar advocates a “see something, say something” approach which “involves creating contexts in which those who are family members or friends or co-workers” can “seek help for those who they have perceived to be radicalizing and potentially radicalizing towards violence.”

A senior Biden administration official described the immediate action necessary for confronting the “urgent” domestic terror threat in a press conference, noting that “manifestations” of that immediacy have already been seen in “the pretty extraordinary pace and scope of work done by investigators and prosecutors in the wake of the January 6 events.”