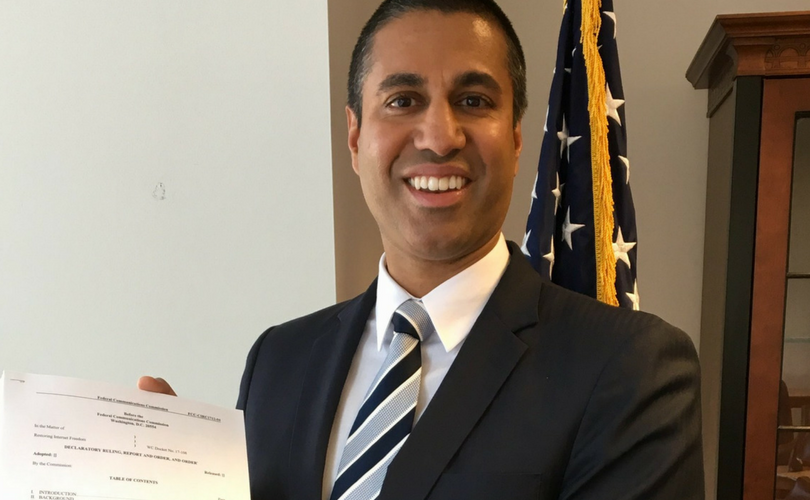 Pai was testifying before the Senate’s Commerce, Science & Transportation Committee Wednesday, for a hearing concerning various issues facing the FCC.

“The greatest threat to a free and open internet has been the unregulated Silicon Valley tech giants that do, in fact, today decide what you see and what you don’t,” Pai said, The Verge reports. “There’s no transparency. There’s no consumer protections, and I think bipartisan members of both congressional chambers have now come to that realization.”

Pai has previously identified Twitter as “part of the problem” because it not only “has a viewpoint,” but “uses that viewpoint to discriminate.” Last September, he wrote an op-ed on Medium addressing the problem of tech giants “serving as gatekeepers of online content,” largely without transparency.

At the time, the FCC chief rejected the idea of regulating these private entities as heavily as public utilities but suggested that some sort of new rules may be in order, particularly in light of their “influence over our economy and society.”

“The public deserves to know more about how these companies operate,” Pai wrote last year. “And we need to seriously think about whether the time has come for these companies to abide by new transparency obligations. After all, just as is the case with respect to broadband providers, consumers need accurate information in order to make educated choices about whether and how to use these tech giants’ platforms.”

The world’s top social media platforms — Facebook, Twitter, YouTube, and Pinterest, as well as YouTube’s owner, the internet giant Google — have all come under fire over the past three years for restricting conservative users while favoring liberal content, leaving conservatives concerned about the problem yet divided on what to do about it.

Sen. Ted Cruz (R-Texas) argues that the federal government can address the problem within its current legal boundaries by threatening to revoke the special liability protections Facebook and Twitter enjoy that are predicated on being truly neutral forums rather than publishers with editorial biases, applying existing antitrust laws to break up companies like Google, or exploring whether biased enforcement of what most users assume to be neutral and open forums constitutes fraud.