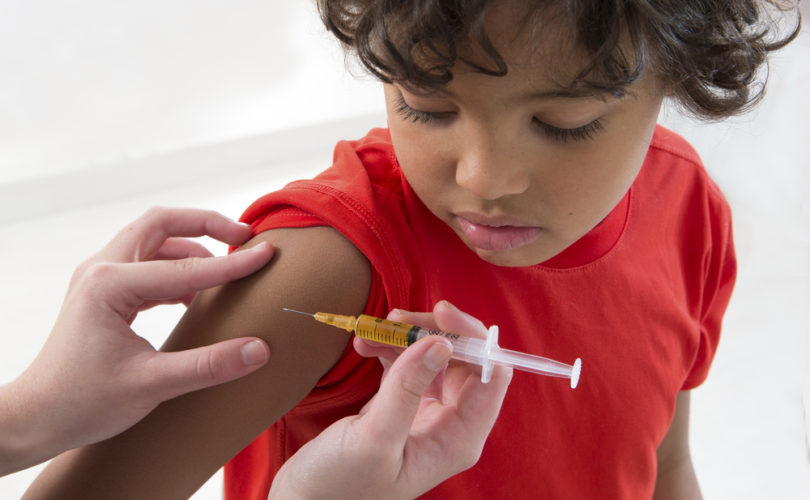 (LifeSiteNews) – An advisory panel of the U.S. Food & Drug Administration (FDA) has given its approval to administering Pfizer’s COVID-19 vaccine to children between the ages of five and 11, with one member making a statement critics say is indicative of the lack of rigor being practiced by the shots’ promoters in the federal government.

Seventeen members of the FDA’s Vaccines & Related Biological Products Advisory Committee voted in favor of giving children a reduced dose of the vaccine, with one abstention, NPR reported. The FDA is expected to adopt its recommendation in a matter of days, at which point the U.S. Centers for Disease Control & Prevention (CDC) will weigh in.

During the panel’s conversation, Dr. Eric Rubin, a Harvard professor and editor-in-chief of the New England Journal of Medicine, said the following (the relevant passage starts at roughly 6:51:41 in the below video):

The data show that this vaccine works and it’s pretty safe … And yet, we’re worried about a side effect that we can’t measure yet, but it’s probably real. And we see a benefit that isn’t that same as it is in older patients […]

It’s a very, sort of, personal choice. If I had a child who was a transplant recipient, I would really want to be able to use a vaccine. And there are certain kids who probably should be vaccinated. The question of how broadly to use I think is a substantial one. And I know it’s not question, and I know we’re kind of punting that to ACIP.

But I do think that it’s a relatively close call. As Dr. [Ofer] Levy just said, and Dr. [Hayley] Gans said, it really is going to be a question of what the prevailing conditions are. But we’re never going to learn about how safe this vaccine is unless we start giving it. That’s just the way it goes. That’s how we found out about rare complications of other vaccines like coronavirus vaccine. And I do think we should vote to approve it.

Rubin’s comments indicating society had to “start giving it’’ in order to discern “how safe this vaccine is for children,” rather than the other way around, alarmed many observers:

After approving the vaccine for kids ages 5-11, the committee concluded “We’re never gonna learn about how safe the vaccine is until we start giving it."

Apparently ‘trust the science' is now code for FDA approval to use our kids as test subjects.https://t.co/i1BG9EdRvH

So let me get this straight the experts are saying we have to push covid shots on kids en masse to find out whether the shots are safe. https://t.co/ypuIBoSTLU

Children are not lab rats. This is obscene. https://t.co/zJdog2wOdY

This is what's being protected: the "inevitable" mandates for all children being championed by none other than former FDA head and current Pfizer director.

This whole evil enterprise is just rotten with corruption from the top down and it's all out in the open for anyone to see. pic.twitter.com/GxQF6OCPpm

Critics of the COVID vaccines argue that Rubin’s quote reflects the broader approach the ruling class has taken to approving, distributing, and pushing compliance with the vaccines, which were developed and released far faster than any previous vaccine.

Vaccine defenders argue that this one-year development period was not starting from scratch, but rather relied on years of prior research into mRNA technology; and that one of the innovations of the Trump administration’s Operation Warp Speed was conducting various aspects of the development process concurrently rather than sequentially, eliminating delays unrelated to safety. However, those factors do not fully account for the condensing of clinical trial phases — each of which can take anywhere from 1-3 years on their own — to just three months apiece.

Further, a growing body of data indicates that the mass vaccination strategy for defeating COVID-19 has failed, thereby undermining the rationale for mandates. The federal government considers more than 189 million Americans (57% of the eligible) to be “fully vaccinated,” yet ABC News reported on October 6 that more Americans died of COVID-19 this year (353,000) than in all of 2020 (352,000), according to data from Johns Hopkins University.

On the specific subject of vaccinating children, data shows they are at little-to-no risk from the virus itself, while even experts otherwise friendly to the COVID vaccines — as acknowledged in July by the left-leaning publication Wired — argue that the potential for vaccine-related myocarditis among young males undermines the public health establishment’s persistent refrain that “the benefits of [COVID-19] vaccination far outweigh any harm.”

This summer, a team of researchers with Johns Hopkins School of Medicine “analyze[d] approximately 48,000 children under 18 diagnosed with Covid in health-insurance data from April to August 2020,” and found a “mortality rate of zero among children without a pre-existing medical condition such as leukemia.” The lead researcher, Dr. Marty Makary, accused the CDC of basing its advocacy of school COVID vaccination on “flimsy data.”

The rapid approval and dissemination of COVID shots for children is “as shocking and demonic as it is illogical,” The Blaze senior editor Daniel Horowitz writes. “Yet they want to cover up the debate as quickly as possible and make this a reality in a shock-and-awe campaign. Their swift obsession with putting this in the arms of children after it has failed to even protect the elderly now raises even more suspicion about the entire premise of using this shot on anyone.”