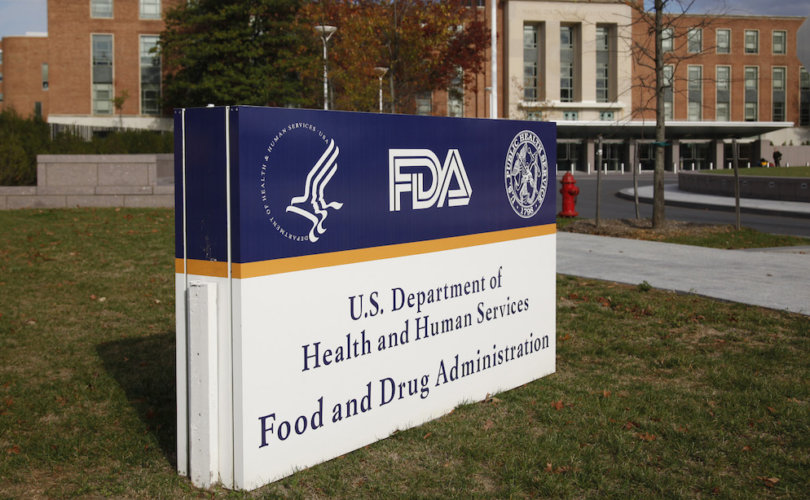 Today, the Food and Drug Association (FDA) changed the regimen for mifepristone (Mifeprex), significantly reducing the obstacles, burden, and cost to abortionists.

The FDA approved RU-486 in 2000 after enacting “accelerated approval regulations,” usually used to speed up the introduction of a drug curing a major disease.

Its guidelines required doctors to administer 600 mg of mifepristone, which causes the newly implanted child to detach from the mother's uterine wall. The mother then takes 400 mcg of misoprostol, which causes contractions that expel the baby from her womb.

But abortionists found that prescribing a lower dose of the expensive mifepristone and increasing misoprostol saved approximately $200 per abortion.

There is no evidence the price they charged for chemical abortions fell in tandem.

Yet the less expensive protocol became ubiquitous. The National Abortion Federation stated that, by 2008, only four percent of abortion facilities followed the FDA's guidelines for medication abortion.

That caused the number of chemical abortions to surge from six percent in 2001 to nearly one-quarter of all abortions, according to the Guttmacher Institute.

But the new regimen carried a price. National Right to Life's Director of Education and Research Randall K. O'Bannon, Ph.D., said today's decision came “despite a record of at least 14 known deaths, and thousands of women suffering.”

By 2011, there had been 2,207 cases of severe “adverse events,” including hemorrhaging, blood loss requiring transfusions, serious infection, and deaths.

That led six states – Arizona, Arkansas, North Dakota, Ohio, Oklahoma, and Texas – to pass laws requiring abortionists to adhere to FDA guidelines. But the Supreme Court refused to take up a challenge to a Ninth Circuit Court of Appeals striking down such a law in 2014.

That cut into profits. Ushma Upadhyay, a researcher for the UC-San Francisco, found that facilities that returned to using the FDA's previous guidelines saw their number of chemical abortions drop 75 percent.

Today's announcement approves mifepristone use 10 weeks into pregnancy. The previous protocol limited the use to the first seven weeks.

A 1998 study found that nine percent of women who have medical abortions at 57-63 days gestational age will require emergency surgery.

The new guidelines also allow personnel other than doctors to administer the pill.

“Extending the upper recommended gestational limit from 49 to 70 days only ensures that the risk of incomplete abortion will be multiplied, as will the number of women visiting emergency rooms around the country suffering from partial or failed abortions,” said Troy Newman, president of Operation Rescue.

“Certainly, none of the modifications is of any benefit to the unborn child,” O'Bannon added.

“The FDA's new protocol serves only the interests of the abortion industry by expanding their base of potential customers, increasing their profit margin, and reducing the level of staff and amount of resources they have to devote to the patient.”

Abortionists were overjoyed. “Today’s FDA announcement of a label change to mifepristone is a significant advancement for women in the United States,” said Amy Hagstrom Miller, the president of Whole Woman’s Health abortion clinics. “All of us are thrilled.”

A statement from the National Abortion Federation (NAF) said, “We are delighted that the FDA has approved a label change.”

Planned Parenthood said the update would help combat “restrictions on medication abortion enacted at the state level in recent years.”

“Updating the label to reflect best medical practice represents a significant step forward for science, for women, and for health care providers who want to give our patients the highest quality care,” said Raegan McDonald-Mosley, PPFA's chief medical officer.

“The new label affirms the deadly realities of Chemical Abortion and underscores the need for in-person patient examination and follow-up care, as well as the fact that the abortion drug regimen presents serious risks to women’s health,” said Anna Paprocki, staff attorney for Americans United for Life. “While the abortion industry will falsely celebrate the label change as a green light to its practice of skirting regulations, it would be wise to remember that women and girls have been injured and killed (for example, Holly Patterson) by the abortion industry’s flagrant disregard for the previous FDA label.”

Newman said that this decision, combined with the abortion industry's opposition to other state health and safety regulations, leave women more vulnerable than ever.

“Planned Parenthood of Kansas and Mid-Missouri expanded sales of the abortion pill regimen to their Wichita office earlier this month, which is ill-equipped to treat incomplete abortions or other complications. Licensed physicians who will dispense the abortion drugs hold no local hospital privileges, leaving women to fend for themselves when expected complications arise,” he said.

“The FDA should be more about protecting the public from exploitative and predatory uses of drugs rather than pandering to Planned Parenthood and the rest of the Abortion Cartel.”