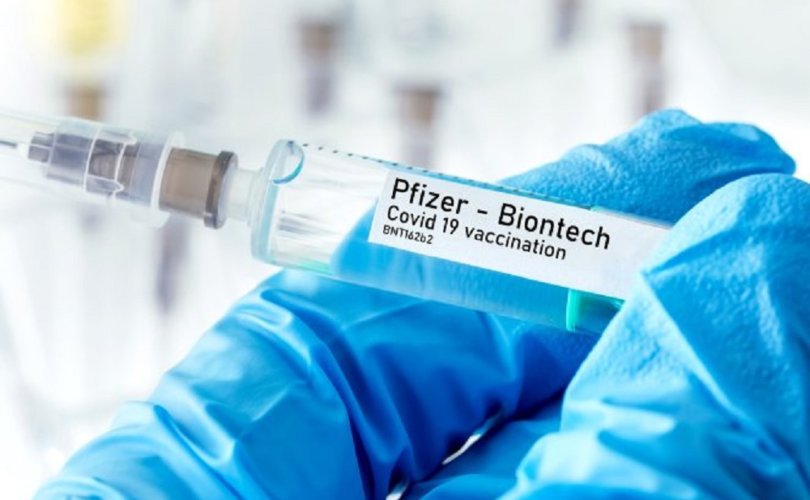 The announcement followed Friday’s news that an Illinois hospital temporarily shut down its COVID vaccination program after four healthcare workers there experienced allergic reactions — one of which was severe — to the vaccine.

Also on Friday, CNN reported that a third healthcare worker in Alaska was hospitalized for six hours for an anaphylactic reaction to the Pfizer vaccine. The report came on the heels of last week’s news that two Alaskan healthcare workers had severe allergic reactions — including one woman who was hospitalized for at least two nights after going into anaphylactic shock.

Anaphylaxis is a severe, potentially life-threatening allergic reaction that can occur within seconds or minutes of exposure to something a person is allergic to. If not treated immediately, it can be fatal, the Mayo Clinic explains.

According to Reuters and other news reports, the director of the FDA’s Center for Biologics Evaluation and Research, Dr. Peter Marks, said polyethylene glycol (PEG), a compound in the Pfizer and Moderna vaccines, may have triggered the allergic reactions in the U.S.

The Pfizer and newly approved Moderna vaccines contain PEG. Both vaccines were approved by the FDA for emergency use, but are not yet licensed.

Lyn Redwood, president of Children’s Health Defense (CHD), said there shouldn’t be any mystery at this stage about whether or not PEG caused the reactions. “It’s a simple blood test,” Redwood said. “If they’ve tested the people who had these allergic reactions for anti-PEG antibodies, then they know. If they haven’t, why haven’t they?”

FDA’s Marks on Friday also acknowledged that allergic reactions to PEG could be “somewhat more common than previously understood.”

But, Robert F. Kennedy, Jr., CHD chairman and chief legal counsel, said: “As we told the FDA in September, studies show that one in seven Americans may unknowingly be at risk of experiencing an allergic reaction to PEG.”

“At the very least, everyone should be screened for anti-PEG antibodies before getting the Pfizer and Moderna vaccines,” Kennedy said. “It is unconscionable that instead, the FDA and CDC are encouraging people to go ahead and risk a life-threatening anaphylactic reaction and just assume that someone will be on hand to save them.”

In September, before either vaccine had been approved, CHD asked the FDA to inform Moderna trial participants that the vaccine contained PEG, and to inform them of the “well-documented evidence of adverse PEG-related immune reactions, including life-threatening anaphylactic immune reactions.”

In a letter to Marks and FDA Commissioner Stephan Hahn, Kennedy also said Moderna should ask trial participants if they’d ever had an allergic reaction to any other drug containing PEG, and the company should prescreen trial participants for PEG allergies, as many people who have anti-PEG antibodies don’t know they have them.

The FDA responded by suggesting that CHD take its concerns directly to Moderna. On Saturday, after the reports of allergic reactions in Alaska and Illinois, Hahn told the Hill:

“One of the things that the FDA does very well and uniquely is really getting to the bottom of events like allergic reactions so we can completely understand the circumstances and better inform the public and also our regulatory decisions.”

An initial investigation into the allergic reactions experienced by the UK healthcare workers suggested PEG may have been the culprit, according to Reuters.

UK health officials have since advised that anyone who has a history of any severe allergic reactions should not get the vaccine. The country is reportedly rolling out “resuscitation centers” equipped to respond quickly to anyone who experiences anaphylactic shock after receiving the vaccine.

In the U.S., however, the CDC says anyone who has a history of severe allergic reactions not related to vaccines or injectable medications — such as allergies to food, pet, venom, environmental or latex — may still get vaccinated but should be monitored for 30 minutes instead of the usual 15 minutes after the vaccine is administered. New CDC guidelines issued after the allergic reactions in the U.S. state:

These guidelines are inadequate, Redwood said. “Many  people who have never previously experienced any type of allergic reaction may be at risk of a severe reaction to the Pfizer and Moderna vaccines,” Redwood said. “That’s because millions of people may have developed anti-PEG antibodies as a result of having unknowingly been exposed to PEG in the past.”

According to research published in 2018, there are more than 1,000 products on the market — including pharmaceuticals, processed foods, cosmetics and disinfectants — that contain PEG. PEG is also the main ingredient in antifreeze.

“Anyone who’s had a colonoscopy, depending on what was used for preparation for the procedure, may have anti-PEG antibodies,” Redwood said, because many of those products contain PEG.

“It’s a simple blood test,” Redwood said. “Everyone considering getting the Pfizer or Moderna COVID vaccine should ask their doctor for a blood test to rule out anti-PEG antibodies before getting the vaccine.”

Studies estimate that approximately 72% of the U.S. population has acquired anti-PEG antibodies. The referenced study used blood samples taken from 1990-1999 and earlier, showing a steady increase over time in the percentage of those with antibodies to PEG, making it conservative to estimate, after two decades, that the incidence is closer to 80% today.

According to a 2018 physicians survey, only 22% of respondents were aware of anti-PEG antibodies, and only 35% were aware of having been prescribed medications containing PEG.

The authors of a 2012 study on PEG antibodies concluded, “patients should be pre-screened and monitored for anti-PEG prior to and throughout a course of treatment with a PEGylated compound.”

According to news reports, documents published by Pfizer and Moderna showed that people with a history of severe allergic reactions were excluded from the clinical trials, which explains why the adverse reaction to PEG didn’t show up in the trials.

Last week Kennedy called on the co-chair of the new COVID Advisory Board to consider the long-overdue review and reform of the government’s Vaccine Adverse Event Reporting System. Kennedy said his request is urgent in light of the push to vaccinate millions of people using vaccines approved for emergency use following abbreviated pre-approval clinical trials.