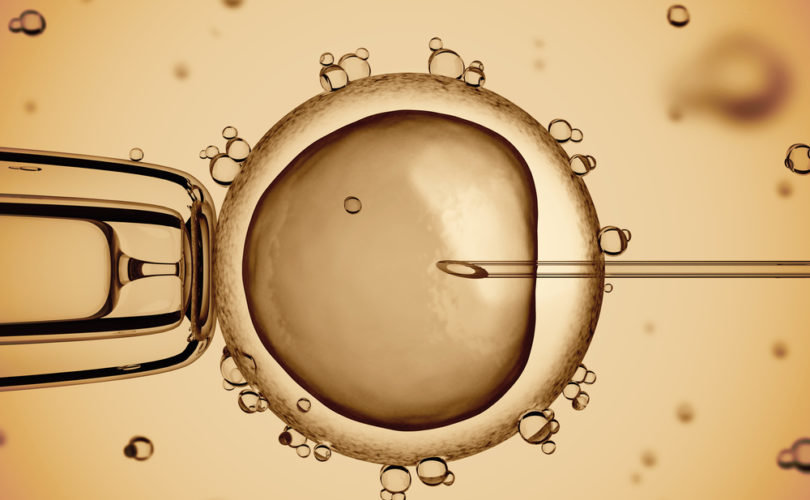 WASHINGTON, D.C., April 7, 2015 (LifeSiteNews.com) –The U.S. Food and Drug Administration is quietly considering whether to follow the United Kingdom’s lead and allow the creation of “three-parent embryos” to address a rare but debilitating family of genetic diseases.

Using the Institute of Health as its proxy, the FDA held the second of three scheduled panel discussions to help it decide, assembling experts from across the U.S. The membership of these panels and of the committee struck to consider their presentations, suggests the deck has been stacked in favor of approval.

“It’s pretty apparent from the speakers that the panels are by and large liberals sympathetic to moving this technology forward,” said David Prentice of the pro-life Charlotte Lozier Institute. “There were lots of scientific presentations but ethicists were in the minority.”

This is noteworthy, said Prentice, considering the workshops are collectively titled “Ethical and Social Policy Considerations of Novel Techniques for Prevention of Maternal Transmission of Mitochondrial DNA.” All were organized for the FDA by the Institute of Medicine.

One participant in this week’s hearings, sociologist John H. Evans of the University of California, said that in America’s current state of polarization, “a Democratic administration will appoint a committee of liberals and put liberal bioethicists on its panels,” who are far more open to experimentation with DNA and reproduction than anyone selected by a Republican administration. “This is a shame,” Dr. Evans told LifeSiteNews: Even if there is polarization, “if the two sides would talk, they would learn from each other.”

The mitochondrial material that would be transplanted from a donor egg or embryo (killing the donor embryo) to a three-parent embryo, is found in most human cells generating the energy the cells need to function. Different defects in mitochondria cause a wide variety of diseases such as dementia, blindness, multiple sclerosis, and epilepsy. The transfer would ensure the child did not inherit one of these from the mother.

Evans, who was invited to this week’s panel because he wrote a history of debates over genetics, told the IoM committee that the American public “believes in manipulating nature,” especially to relieve suffering,  “but not the ‘natural’ human [and it] wants the features of the species to be set by ‘nature’ or God, not society.”

But the mitochondrial transfer falls between the cracks of this distinction, Evans said. “It’s not actually treating a disease. No one has a disease. It is creating a disease-free human being.” This is a line that American science has not yet crossed.

Evans noted that one theoretical way of doing mitochondrial transfer, from a donor embryo, would be unacceptable to both Catholics and Evangelical Protestants, because the donor embryo is killed. The second possible method transfers disease-free material from an unfertilized donor egg, which he believes would be opposed only by Catholics because their “natural law tradition” prohibits interfering with nature in this way.

But the Lozier Institute’s Prentice says genetic manipulation to prevent disease in one’s children would just be “opening the first gate.” Next would come elimination of unwanted heritable characteristics starting, of course, with diseases, but then moving on to more subjective traits, and then to enhancements. “This is all, quite frankly, eugenics,” he told LifeSiteNews. “They want to create new individuals whom they only hope will be an improvement. But it ignores all the people who actually have the diseases.”

One problem with that, Prentice says, is the “hubris” involved: do scientists really know enough to be designing people? He cites sickle cell anemia. “If the child inherits the sickle cell anemia from both parents, he gets anemia. But just getting the gene from one parent makes you resistant to malaria.” That’s one connection science knows about, he says. But how many does science not know about?

There is no American law against transferring mitochondrial material, said Prentice, but the FDA claims it has the right to approve any clinical testing on human embryos and the researchers in the field want the FDA’s stamp of approval so that they can get federal funding.

If neoconservatives, religious and pro-life organizations combine to fight against human genetic manipulation of this kind, he suggested, the battle will likely be fought in Congress over funding.