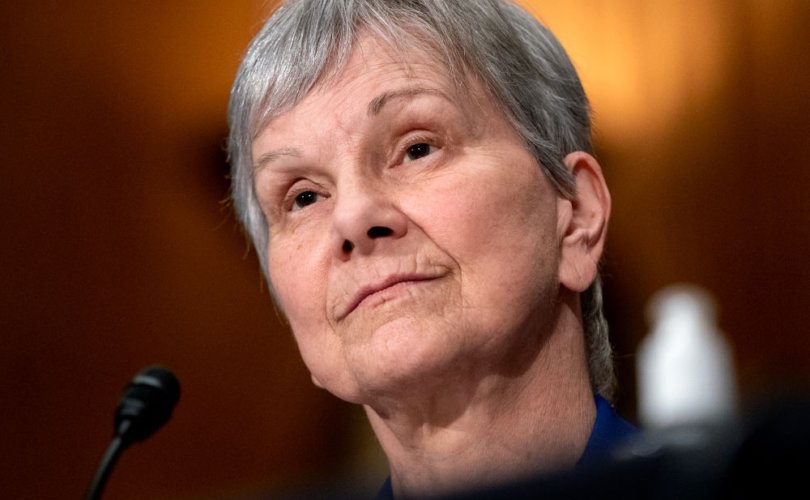 Janet Woodcock, acting commissioner of the US Food and Drug Administration (FDA), speaks at a Senate committee hearing on July 20, 2021 in Washington, DC.Stefani Reynolds-Pool/Getty Images

WASHINGTON (LifeSiteNews) — The U.S. Food and Drug Administration (FDA) has restored a document to its website which reports that the rate of heart inflammation among young men after receiving the experimental COVID-19 jabs is far higher than previously understood.

The move comes after the 30-page document, which outlines the reasons the FDA granted full approval for Moderna’s “Spikevax” COVID-19 mRNA drugs on January 31, was abruptly removed from the agency’s website without explanation just hours after conservative news organization The Epoch Times reached out to the FDA for questions about the data.

So, the FDA apparently removes from its website the document explaining why it approved the Modena vaccine. I really wonder why …https://t.co/PeAoUI2cSd

The initial removal of the document had sparked backlash from members of congress, the National Vaccine Information Center, and journalists, who have argued that the FDA’s actions failed to uphold standards of transparency.

According to The Epoch Times, the document, entitled the Summary Basis for Regulatory Action (SBRA), was made public on February 1, a day after the FDA granted approval for the Moderna jabs. However, the document quickly vanished without explanation.

“After The Epoch Times sent questions about critical portions of the document, it disappeared from the agency’s website,” the outlet reported, adding that “[i]t popped back up after multiple emails and phone calls.”

Although the FDA has subsequently made the document public again, it has not given a reason for its temporary disappearance.

LifeSiteNews reached out to the FDA for further information, however the regulatory agency’s press office declined to comment on the temporary removal of the document.

Meanwhile, The Epoch Times noted that “[a]t least one portion of the document was altered before it was restored online.”

“The initial version of the SBRA said that a scheduled communication and a scheduled meeting between regulators and Moderna were canceled, but it didn’t explain why,” the outlet reported, adding that “[t]he updated version says Moderna canceled the meetings.”

The Epoch Times has since submitted Freedom of Information Act (FOIA) requests for a meta-analysis referenced in the document along with “the original SBRA, and communications regarding the document.”

The FDA’s decision to pull the report had drawn criticism from some Republican lawmakers.

Reps. Byron Donalds of Florida, Clay Higgins of Louisiana, Ralph Norman of South Carolina, and Earl “Buddy” Carter of Georgia had each given emailed statements to The Epoch Times after the FDA removed the document, expressing their disappointment in what they characterized as the FDA’s failure to be transparent with the public.

“The FDA is intentionally concealing this data from America’s citizenry, many of whom have serious and legitimate concerns about the COVID vaccines,” said Rep. Higgins, a member of the House Oversight Committee. “This type of transparency failure is exactly why many Americans don’t trust the government and don’t want to receive a COVID vaccine.”

Last week, The Epoch Times reported that the document which was temporarily pulled from the website contained concerning data regarding myocarditis and pericarditis (heart inflammation) rates in connection with the jabs.

The document also noted that the rates of heart inflammation among young men in connection with the shots were far higher than initially suggested based upon passive reporting to the U.S. government’s Vaccine Adverse Event Reporting System (VAERS). As of January 28, 2022, 31,185 cases of myocarditis or pericarditis have been reported to VAERS in connection with the COVID shots.

According to the FDA’s document, however, while “an analysis of VAERS data from passive surveillance indicated a reporting rate of 40 cases per 1 million second doses administered to males 18 to 24 years of age,” the FDA’s own meta-analysis, which examined four healthcare claims databases in Center for Biologics Evaluation and Research’s Biologics Effectiveness and Safety System, estimated that the rate was much higher, at 148 cases per 1 million males between the ages of 18 and 25.

The meta-analysis mentioned in the report has not been made public.

The higher rates of heart inflammation noted in the report as compared with VAERS data lends credence to concerns that claims submitted to VAERS  are only the tip of the iceberg.

A 2010 Harvard-executed study commissioned by the Department of Health and Human Services (HHS) found that injuries reported to VAERS represented “fewer than 1% of vaccine injuries,” suggesting the actual numbers of deaths and injuries connected with the COVID-19 shots may be significantly higher than currently reported.

Incidences of myocarditis in young men following COVID-19 vaccination have led some countries to discourage the use of some of the shots in younger people.

France’s Health Authority has advised against the Moderna vaccine in anyone under 30, while both Sweden and Denmark have also had second thoughts about the use of Moderna’s jabs in the young. Last April, Israeli researchers discovered that the Pfizer vaccine had led to 62 cases of myocarditis, the majority in men under 30.

Meanwhile, the FDA’s decision to temporarily pull down its SBRA document comes as it has repeatedly attempted to stall on releasing the 329,000 pages of documents it reviewed before approving Pfizer’s COVID jab last year.

The regulatory agency made headlines when it asked for 55 to 75 years to years to fully release the data to the public. FDA’s attempts to avoid releasing the data has led the editors of the prestigious British Medical Journal (BMJ) to issue an urgent call for the immediate release of all data used to approve the increasingly-mandated drugs.

“We need complete data transparency for all studies, we need it in the public interest, and we need it now,” the BMJ editors stated.