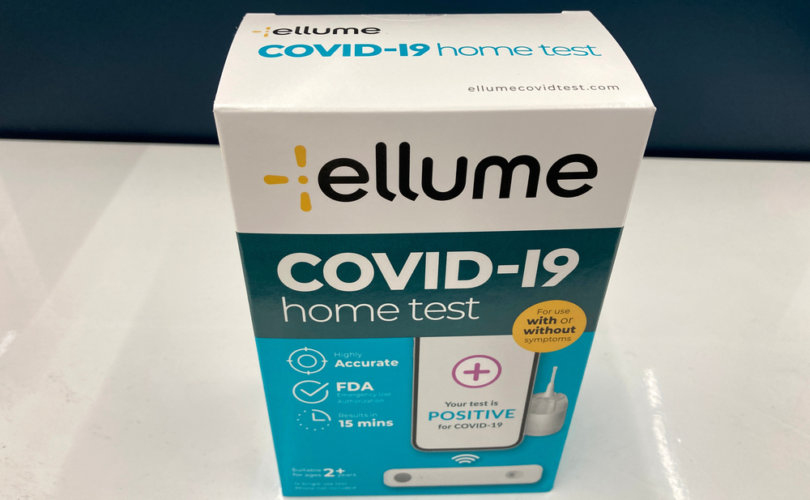 CBS reported that the massive recall “is an expansion of last month’s recall of 200,000 kits for the same issue.”

The Biden administration had financially backed the defective tests’ manufacturer earlier this year, agreeing to a $231.8 million deal on February 24 to increase the amount of at-home COVID-19 tests in the United States.

The FDA said the tests are being pulled due to producing “higher-than-acceptable false positive test results for SARS-CoV-2.”

The federal agency added that the recall of the more than 2 million kits is categorized “as ‘the most serious type,’ known as a Class I recall,” adding that the “[u]se of these tests may cause serious adverse health consequences or death.”

Citing an FDA report, The Federalist noted that “a false positive could result in delayed diagnosis or treatment for an individual’s actual illness, unnecessary COVID-19 treatments which can have dire side effects, or needless isolation.”

Individuals who test positive for COVID-19 could also be refused access to public venues or forbidden to go to work in many cases.

Made by Australian-based biotech company Ellume, the defective test kits had been granted an emergency use authorization (EUA) by the FDA on December 15, 2020 and a revision to the EUA on February 11, 2021 to allow use of the company’s At-Home kits.

Last week, the FDA made the decision to recall the more than 2 million test kits produced between February 24 and August 11, 2021, after finding kits in those batches produced an unacceptably high rate of false positives.

According to NPR, 35 false positives had been reported to the FDA.

The Federalist pointed out that “[t]he recalled tests were manufactured beginning on February 24, just days after the Biden administration handed Ellume millions,” with CBS reporting that kits from the defective batches had been distributed between April 13 to August 26.

The faulty test kits made up over 10 percent of the total number of tests produced by Ellume.

In a statement, Ellume CEO Dr. Sean Parsons said his company has worked with the FDA “to voluntarily remove affected Ellume tests from the market,” adding that “the reliability of negative results is unaffected by this issue,” though positive results may be inaccurate.

If you recently used an Ellume COVID-19 Home Test and received a positive test result, it could be false. That’s why the U.S. Food and Drug Administration just issued a recall. https://t.co/piI42tjvx2

It’s unclear what long-term impact the sweeping recall may have on Ellume.

According to NPR, “Ellume’s contract with the Department of Defense and Department of Health and Human Services helped fund the company’s first plant in the country, which opened in Frederick, Maryland in May.”

In addition to the nearly $2.4 million deal with Ellume in February, the Biden administration has spent billions financing rapid at-home COVID-19 kits.

The Federalist reported that the federal government shelled out “$2 billion on rapid at-home kits in September,” and plans to “spend another $1 billion on tests in October.”