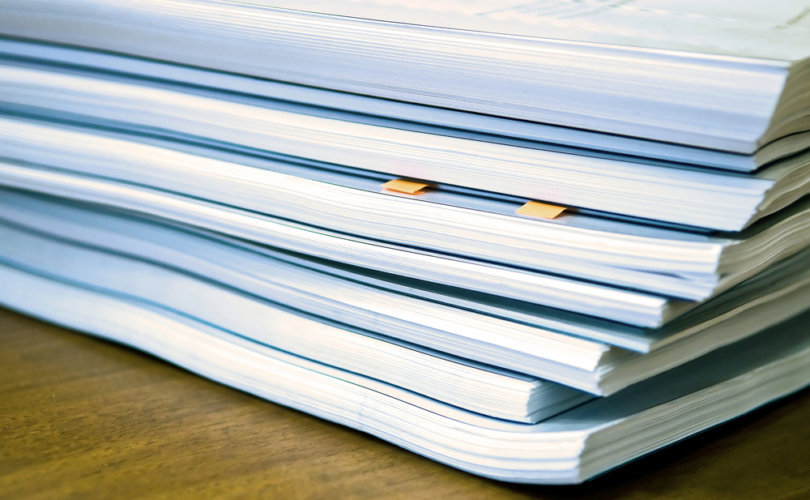 (LifeSiteNews) — The U.S. Food and Drug Administration (FDA) has once again requested permission to hold off on releasing the data it used to approve Pfizer’s COVID-19 shots for widespread distribution despite a court order requiring them to begin publishing 55,000 pages of documents per month starting in March.

Meanwhile, Pfizer has attempted to insert itself into the matter in an effort to protect its interests.

The FDA’s request to continue hiding the crucial safety data from consumers comes as COVID-19 jabs, including those produced by Pfizer, are increasingly mandated across the U.S. and the globe for participation in many aspects of society.

Attorney Aaron Siri, who filed a Freedom of Information Act (FOIA) lawsuit against the FDA in August on behalf of a coalition of researchers and scientists to demand the full release of the documents, wrote about the developments in a Substack post on Wednesday.

According to Siri, the FDA “has now asked the Court to make the public wait until May for it to start producing 55,000 pages per month and, even then, claims it may not be able to meet this rate.”

And Pfizer has now moved to join the lawsuit claiming it wants to help expedite. 😂

The regulatory body’s renewed efforts to stall publication of the documents and Pfizer’s arrival on the scene come after the FDA raised eyebrows last year by requesting decades to fully release the data it had reviewed before authorizing Pfizer’s COVID-19 injections.

In response to Siri’s FOIA lawsuit, the FDA had asked the court for 55 to 75 years to make public the roughly 329,000 pages of documents in its possession.

Facing legal pressure, however, in November the FDA released its first batch of documents, a scant 91 pages that, nonetheless contained data suggesting that tens of thousands of serious adverse events and more than 1,200 deaths had been reported in the first three months after Pfizer’s drug was cleared by the FDA under an Emergency Use Authorization (EUA).

Then, earlier this month, a U.S. district judge rejected the FDA’s request to continue delaying the release of the data, ordering the regulatory body to publish the documents at a rate of 55,000 pages per month beginning in March rather than the 500 pages per month initially requested.

Despite the judge’s order, however, the FDA has now said it cannot begin to release the documents until at least May, and even then cannot produce them at the rate demanded.

According to Siri, the FDA’s excuse rests in its claim that its reviewers can’t read the documents at the rate requested of them by the court.

“Instead of complying with this Court’s reasoned order, the FDA claims these 11 reviewers can only review a total of 10,000 pages per month,” Siri stated in a brief filed with the United States District Court in the Northern District of Texas. “What the FDA does not say, and what basic math shows, is that a rate of 10,000 pages a month for 11 full-time reviewers amounts to only 5 pages per hour!”

“This rate is made even more absurd because most of the pages the FDA will be reviewing during this period are repetitive data files that only require second level review to redact minimal amounts of PII that Pfizer may have left in the documents,” Siri continued, arguing that the “FDA’s reality defying claim and contemptuous approach to its production obligations should not be countenanced.”

“[T]he FDA’s defense effectively amounts to claiming that the 11 document reviewers it has already assigned and the 17 additional reviewers being onboarded are only capable of reading at the speed of preschoolers,” Siri quipped in his Substack post.

Meanwhile, Pfizer itself has stepped into the fray as a “third party,” requesting the court allow it to assist the FDA in producing the documents while ensuring that the regulatory body doesn’t disclose certain information Pfizer wants to keep hidden.

According to Reuters, “Pfizer’s lawyers at DLA Piper told U.S. District Judge Mark Pittman on Jan. 21 it wanted a role in the proceedings to help the FDA avoid ‘inappropriately’ disclosing trade secret and confidential commercial information.”

“Pfizer’s legal bill will likely be multiple times what it would cost the FDA to simply hire a private document review company to review, redact, and produce the documents at issue,” Siri noted, adding that “Pfizer has assure[d] the Court it is here to help expedite production of the documents.”

Pfizer has intervened in our FOIA request to the FDA for release of their vaccine safety/efficacy data, which the judge ordered to be released in 8 mos. DOJ lawyers for the FDA agreed that they want Pfizer’s help in redacting the documents before release.https://t.co/vkeQw5fuLv

The news comes even as The British Medical Journal (BMJ), one of the world’s oldest and most respected medical publications, recently issued an urgent call for the full release of all data regarding the COVID-19 injections and other treatments, arguing that keeping crucial information hidden from the public is “morally indefensible.”

In its editorial, the BMJ pointed out that “Pfizer’s pivotal covid vaccine trial was funded by the company and designed, run, analysed, and authored by Pfizer employees,” while “[t]he company and the contract research organisations that carried out the trial hold all the data.”

“We need complete data transparency for all studies, we need it in the public interest, and we need it now,” the BMJ editors stated.

Recently, the #British Medical Journal, which is the oldest medical journal in the world, began to demand the immediate release of all #CovidVaccines data —something which has, until this very day, not been made public.https://t.co/S4xf9hGXLK via @epochtimes

Meanwhile, Siri hinted at the potential for corruption, pointing out that Pfizer and the federal government are mutually benefiting from one another while using taxpayer dollars to shield themselves from liability.

“Just look at this circus – the government mandates Pfizer’s product, gives it immunity for any safety or efficacy issues, promotes its product using taxpayer money, gives Pfizer over $17 billion and then uses taxpayers’ money to fight to avoid providing even the most basic level of transparency to the public,” Siri wrote.

“[A]ll of this insanity is simply in response to an attempt to obtain some basic transparency,” the attorney said, arguing that the apparent moves by Pfizer and the FDA to obfuscate the data surrounding the COVID jabs “should again bring into sharp focus why the government should never coerce or mandate anyone to get an unwanted medical product or procedure.”

“Somewhere on the other side of the growing heap of government and pharma lawyers is transparency,” he said.