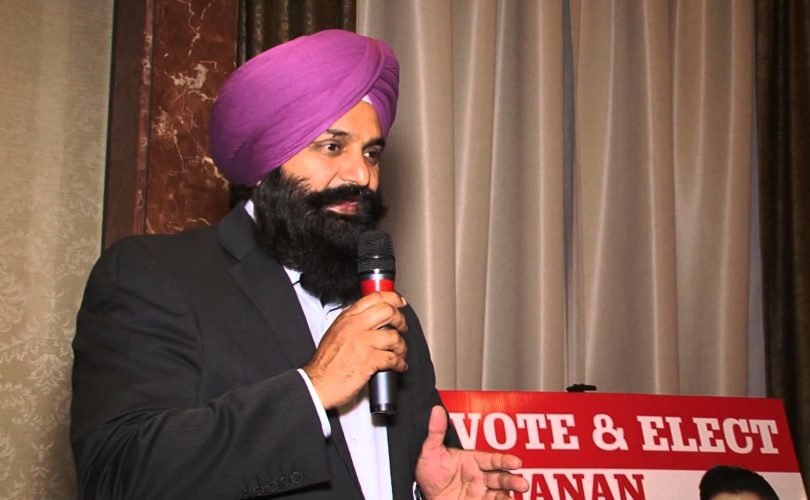 Jagdish Grewal had written that children with same-sex attraction should be able to receive reparative therapy if they and their parents desire it.

MISSISSAUGA, October 9, 2015 (LifeSiteNews) — A popular Sikh pro-life and pro-family federal candidate in Ontario was quickly dropped by the Conservative party earlier this week after an article surfaced from earlier this year in which he said he believes that homosexuals can receive therapy to become attracted to the opposite sex.

Jagdish Grewal, running in the Mississauga-Malton riding, wrote an editorial in the Punjabi Post earlier this year with the title — mistranslated by mainstream media — “Is it wrong to become a straight person from a homosexual?”

In the article, Grewal called sexual actions between two members of the same sex “unnatural behaviour” while saying that children with same-sex attraction should be able to receive reparative therapy if they and their parents desire it.

NDP leader Thomas Mulcair as well as Liberal Leader Justin Trudeau called for Grewal to be dropped as a candidate. The Conservative Party acted quickly to give Grewal the boot.

“These comments do not reflect the views of the Conservative Party of Canada. We believe that all Canadians — regardless of race, religion, gender, or sexual orientation — deserve to be treated with respect and dignity,” the Party said in a statement. “Mr. Grewal is no longer an official candidate for the Conservative Party.”

But Grewal reacted with dismay, saying that his article, originally in Punjabi, had been mistranslated and that he harbors no ill feelings towards homosexuals.

He says that the headline of his article properly translated. Most media reported the title as, “Is it wrong for a homosexual to become a normal person?”

Grewal in his article was reacting to an Ontario private member’s bill passed in June that made it illegal to provide psychotherapy to minors for either homosexuality or gender dysphoria, and prevents the government funding such therapy under the Ontario Health Insurance Plan.

“The political competition of today raises the question of whether any person's wish to become a straight person is wrong?” Grewal wrote in Punjabi at that time. “If it is a parent's right to set guidelines for their children in terms of their education, career and health, then why is it illegal for them to strengthen their natural heterosexuality?”

When asked by CTV News on Wednesday about his opinion on homosexuality, Grewal said:  “I have always and will cherish every human on this earth without any discrimination.”

In an interesting twist, Grewal will still appear as the Conservative candidate on the ballot since the party’s decision to oust him came too late for Elections Canada to change ballots. He has decided to continue his campaign.

Jim Hughes, National president of Campaign Life Coalition, applauded Grewal for not dropping out of the race.

Grewal has stated that if he wins, he will appeal his case to the party. If the party still rejects him, he will sit as an independent.

“I will show them the actual translation of that article,” he told CTV News. “If the Conservatives will bring me back, fine, otherwise I (will sit) as an independent (if elected).”

Grewal’s views on marriage and sexuality may be closer to the Conservative Party’s own views than what the mainstream media would lead the casual reader to at first suspect.

A Conservative party policy declaration affirmed by delegates at a 2013 convention states under a heading titled “Family and Marriage” that it supports “legislation defining marriage as the union of one man and one woman” and that the “family unit is essential to the well-being of individuals and society.”

Gwen Landolt, National vice-president of REAL Women of Canada, criticized the Conservative Party for dropping a candidate over outlining a legitimate position on therapy for homosexuals.

“It’s unfortunate this happened. Mr. Grewal has every right to express an opinion that many Canadians would agree with. He’s been badly treated in this because he’s really speaking from a legitimate perspective when it comes to human sexuality,” she told LifeSiteNews.

Landolt said the topic of homosexuality is driven by “so much political correctness” rather than evidence-based science to the point that no one can even rationally criticize tenets of homosexual ideology without being attacked as a ‘homophobe’ and a ‘bigot.’

“This has to be stopped,” she said, adding that it is “just ridiculous” how a “small minority of people” who make up the homosexual-activist movement end up “calling the shots” on candidates when it comes to elections because of their verdict on who is being politically correct and who is not.