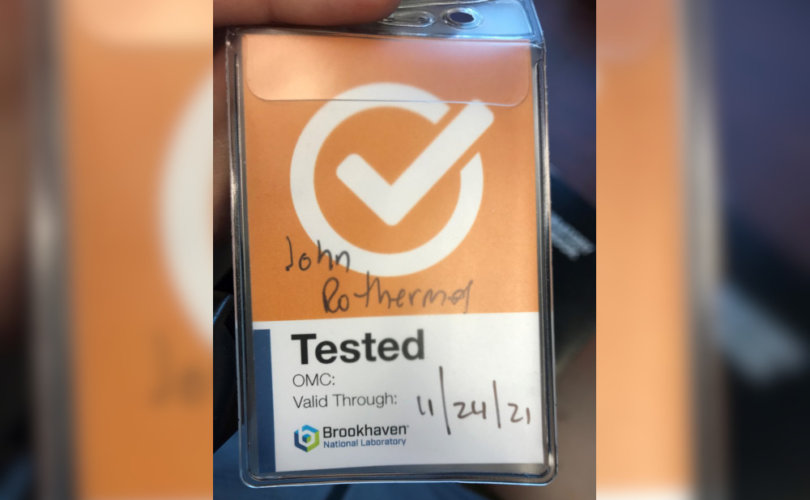 UPTON, New York (LifeSiteNews) — An engineer with a Department of Energy-funded national research laboratory has resigned from his position after his employer imposed a discriminatory COVID-19 policy requiring employees to wear color-coded badges indicating their vaccination status.

“As of today, I’m a former employee of Brookhaven National Laboratory,” John Rothermel told LifeSite in a phone interview Monday.

“I never was the most political person in the world, but this has just driven me to be an activist,” he said. “I have never in my life thought I would be calling the media, or standing in a picket line, or doing any of these things, or quit my job over a political issue, but here I am. I had a job lined up, they approved my exemption, and I walked into my boss’s office and handed over my resignation letter saying, ‘Too bad. Goodbye.’”

Rothermel had worked as an electrical design engineer for Brookhaven National Laboratory (BNL) — a federal contractor which receives its primary funding from the Department of Energy’s Office of Science — for three years before turning in his resignation last week.

“My last day was on Friday,” he said. “I resigned over the vaccine mandate and how they handled it.”

Rothermel, who graduated from Worcester Polytechnic Institute with a degree in Electrical and Computer Engineering, explained that BNL rolled out its vaccine mandate following the Biden administration’s mandate for federal employees in September but “went over and above and started requiring employees to wear badges to identify them.”

Rothermel told LifeSite the company started by handing out blue badges to employees who had gotten the experimental COVID-19 shots.

He said wearing the badge at work was initially voluntary but soon became mandatory.

Suggesting the policy was intended to “make people feel more comfortable,” he said it enabled employees to “police each other.” He argued it “really was a horrible idea.”

After requiring the blue badges for vaccinated workers, Rothermel said the lab “quietly rolled out a requirement” compelling unvaccinated employees to wear bright orange badges to indicate they had not gotten the shot.

Rothermel, a pro-life nondenominational Christian, has refused to get the experimental COVID-19 shots because they were developed using the cells of aborted babies.

With the help of his pastor, he applied for a religious exemption to the jab mandate.

Rothermel said despite his efforts to get an earlier decision, he was forced to wait six weeks to learn whether his request for a religious exemption had been granted, a date just two weeks before the employee injection deadline.

Rothermel called the timeline “completely coercive,” asserting that “it was just meant to apply the maximum amount of pressure on you.”

“It was literally only two weeks to figure your life out,” he said.

The former BNL employee said those who didn’t get the jab and whose exemption request was denied would be “assumed” to have resigned, leaving them without the ability to collect unemployment or severance.

Rothermel also said the final decision to grant a religious accommodation was left up to direct managers even if approved by the human resources department, a system he suggested was “rife for discrimination.” Further, he said religious exemptions are set to be reviewed regularly, so an employee granted an exemption could end up having it revoked at a later date.

Rothermel told LifeSite his company finally notified him on November 4 that his request for a religious exemption had been approved, and that he would therefore be required to submit to weekly testing.

On November 10, after he got his first COVID-19 test, Rothermel said he was given an orange card showing the date of his COVID test and was assured he would not be required to wear it.

The following Wednesday, November 17, he was given a new orange card in a plastic sleeve that could be attached to his lanyard.

Rothermel said he was told, “You’ve got to wear these now.”

Despite Lincoln’s confirmation, Rothermel told LifeSite a former coworker asked upper management about the badge policy and was told it was “never approved by management.”

“They seem to be getting wind of the backlash that is brewing,” Rothermel remarked.

LifeSite reached out to Brookhaven National Laboratory for comment but has yet to hear back.

Rothermel said he had been concerned about the company’s decisions regarding COVID-19 vaccination since the federal jab mandate was rolled out in September, but the color-coded vaccine status badges were the final straw.

He turned in his resignation last week and worked his final day on Friday.

Rothermel said that since he chose to resign he’s not afraid to speak out about the company’s policy, but that many are afraid to lose their jobs.

“But everyone else is saying, ‘I’m walking around with the star of David on my shirt, you know, this is like identifying me as a religious dissident,’ but they’re afraid to say anything because they’re afraid they’re going to get fired,” he said. “I’ve been trying to do my best to help out others who aren’t in the same situation to draw attention to these things that other people are afraid to.”

The sole breadwinner in his household, supporting a wife and two young children, Rothermel told LifeSite he was lucky to find another position before turning in his notice of resignation at BNL.

Rothermel said his new job is with a private company out-of-state, which is not subject to the federal employee jab mandate.

“I’m lucky that I’m able to be brave because I have a lifeboat here that I can support my family. But there are a lot of people that aren’t nearly as lucky and are just as mad as me and upset and hurt,” he said.

Directing his comments toward government employees and federal contractors contending with jab mandates, Rothermel said “there are better employers” and urged others who have objections to the shots to “really think carefully about whether you want to remain under the thumb of the government.”

Rothermel said he’s confident that the Occupational Safety and Health Administration (OSHA) mandate requiring all private businesses with 100 or more employees to mandate the shots will ultimately be struck down and won’t affect his new position with a private employer. The mandate has been stayed by a federal court and suspended by OSHA pending a permanent ruling.

“Even if it’s not, I know the process for [a] religious exemption, and I know that they’re not going to toy with me the way the federal contractor did,” he said.