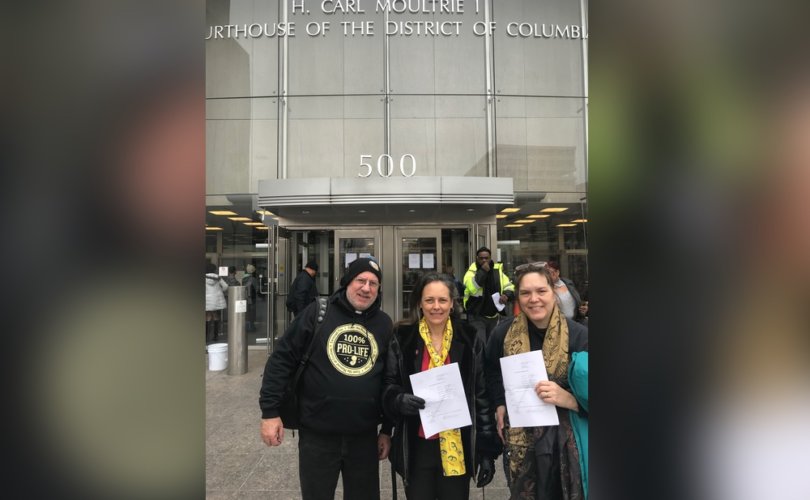 WASHINGTON, D.C., January 30, 2019 (LifeSiteNews) – A federal court dismissed trespassing charges yesterday against three pro-life activists who entered a late-term abortion center in the nation’s capital just before Christmas to try to save the babies inside.

Father Stephen Imbarrato, Linda Mueller, and a third pro-lifer who wished to remain anonymous entered Washington Surgi-Clinic on December 20, distributing roses to the moms inside and imploring them to choose life for their babies.

Washington Surgi-Clinic is where Dr. Cesare Santangelo, who in 2013 was caught on tape agreeing to deny medical care to a viable child who survives an abortion, practices.

“This is the third time Red Rose Rescue charges in D.C. have been dismissed,” Fr. Imbarrato told LifeSiteNews. Imbarrato, formerly of Priests for Life, recently formed LifeMinistriesUS, a new consortium of pro-life ministries dedicated to obtaining constitutional protection for unborn children from the moment of conception.

Then, President Clinton signed the Freedom of Access to Clinic Entrances (FACE) Act, which makes it a federal crime to physically block women from obtaining abortions, forcing the pro-life movement to switch tactics.

READ: Priest: It was an ‘honor’ to be jailed for trying to save babies inside abortion center

The Red Rose Rescues have been something of a revival of the early “Rescue” movement. During Red Rose Rescues, pro-life activists enter abortion facility waiting rooms and offer the women inside red roses and pro-life information. Inspired by Canadian activist Mary Wagner, during these rescues, pro-lifers refuse to leave and are often dragged out by police, insisting they are remaining in solidarity with and showing love to the babies slated to die.

So far, no one in any of the 11 Red Rose Rescues in the United States has been charged with violating FACE, although some rescuers have spent time in jail. Pro-lifers have been arrested at all of those rescues but one.

December 2018 was the second time that Imbarrato, sometimes called “the Protest Priest,” was arrested in a Red Rose Rescue in Washington, D.C. He has been involved with all four rescues in the city, though.

For his first D.C. rescue, Fr. Imbarrato spent seven days in jail after he told the judge at his trial he wouldn’t abide by any probation or agree to pay any fines.

The District of Columbia is a federal jurisdiction, so any rescues conducted there are tried in federal court and prosecuted by the Trump administration.

“Yes, God is good, but I can’t help but think that ongoing communications to the Trump administration about the Personhood Presidential Order and Red Rose Rescues are having an effect,” Imbarrato told LifeSiteNews, referencing his effort to get President Trump to sign an executive order directing government agencies to recognize in actions and policies “the personhood of the unborn and (to) protect their full legal status as Americans.”

“It is interesting that in the almost dozen Red Rose Rescues we have done, saving dozens of pre-born babies, the only time charges have been dismissed is when the prosecution has been the United States of America – that is, under the auspices of the U.S. Department of Justice” headed by the Trump administration, commented Imbarrato.

On December 22, 2018, Father Fidelis Moscinski of the Franciscan Friars of the Renewal, William Goodman, Patrice Woodworth, and Matthew Connolly conducted the first-ever Red Rose Rescue at a Planned Parenthood in Trenton, New Jersey, where they prevented at least one baby from being aborted that day.

“We will continue to try to help moms and save their babies in places and situations where otherwise the moms may be abandoned and their babies given up to certain death,” Fr. Imbarrato promised. “This is a big part of what Red Rose Rescues are all about.”