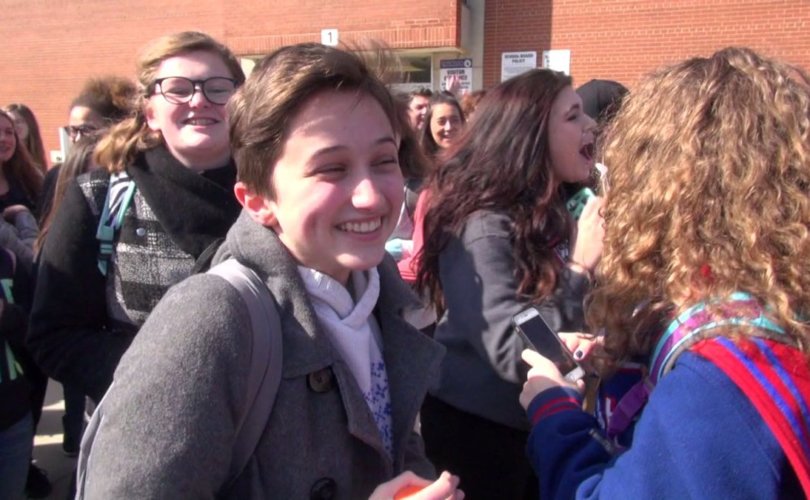 June 1, 2017 (LifeSiteNews) — A federal appeals court Tuesday ruled that a gender-confused girl who wants to live as a boy should be allowed to continue using the boys’ restrooms at her Kenosha, Wisconsin, high school.

The Seventh Circuit Court of Appeals, in a unanimous ruling, upheld a September injunction by U.S. District Judge Pamela Pepper in favor of biological female student Ash Whitaker, a senior at Tremper High School. Judge Pepper's injunction allowed Whittaker to use the boys‘ restrooms without fear of punitive actions or being monitored by the school.

Whitaker and her mother filed a federal civil rights suit against the Kenosha Unified School District with the help of the Transgender Law Center, a legal activist group, and other attorneys. The Kenosha school district argued that allowing a girl, Whitaker, to use the boys’ restrooms harms other students, including their right to privacy. It has now lost three times in a row in court.

A TLC release highlighted the significance of the case from the group's “progressive” perspective:

“With this decision, the Seventh Circuit (which covers Wisconsin, Illinois, and Indiana) is the first federal appeals court to find conclusively that a transgender student has the right to be treated in accordance with the student’s gender identity at school under both Title IX and the Constitution. Notably, it is also the first decision to reach that conclusion without reliance on the Obama administration’s guidance on schools’ Title IX obligations to transgender students, which the Trump administration rescinded in February.”

The Title IX Education amendment signed into law by President Nixon in 1972 bars “the use of federal money to support sex discrimination in education programs,” according to a Department of Justice website. Traditionally it has been used to provide equal allocation of school tax dollars for girls versus boys in sports programs, but now “transgender” lawyers are using it for their own ends.

Notably, “gender identity” (like “sexual orientation”) is not a federal civil rights category as established by Congress, despite efforts by the Obama administration to apply “sex discrimination” law to “gender identity.” In a move heralded by conservatives, President Trump in February reversed Obama’s executive order pressuring public schools to allow “transgender” students to use opposite-sex restrooms, locker rooms, and to join opposite-sex sports teams.

Because of Trump’s action, in March the Supreme Court ruled that it will not hear a similar “transgender” case involving Gavin Grimm, another gender-confused female student who, like Ash Whitaker, identifies as “male” and wants to use the boys' school restrooms, at Gloucester High School in Virginia.

A leading conservative activist in Indiana, where public schools will be affected by the Court of Appeals’ pro-“transgender” decision, feared its cascading effects across the Midwest.

Micah Clark, executive director of the American Family Association of Indiana, said the ruling represents “the tyranny of a radical minority, and a politically correct court, over common sense gender protections that have existed since the beginning of time.”

“The Seventh Circuit appears to be signaling that it will throw aside the privacy and safety rights of the vast majority of students in favor of a radical political agenda that has no basis in logic. law, or science,” Clark told LifeSiteNews. “A very few sexually confused students appear to have a newly imagined ‘right’ to use restrooms, showers and locker rooms regardless of the emotional harm or psychological intimidation this poses to other children.”

Clark called on other courts to “more fairly consider the rights of millions of students that this court has discarded,” and he urged school administrators in Indiana to wait to act as the case may ultimately be decided by the U.S. Supreme Court.

Schools could be “opening themselves up to the anger of far more parents who want to protect their children from such exposure,” he said.

A Kenosha News account of the case reports that Whitaker “was born a girl but identifies as a boy.” It adds that “Whitaker has suffered depression and extreme anxiety as a result of ‘being singled out and treated differently from other boys.’”

But pro-family advocate Linda Harvey of Mission America told LifeSiteNews that it was “absolutely proper” for school authorities to single out Whitaker for special treatment “precisely because she is different from the other boys. In fact, she’s not a boy at all.”

The Appeals Court decision states, “While Ash’s birth certificate designates him as ‘female,’ he does not identify as one. Rather, in the spring of 2013, when Ash was in eighth grade, he told his parents that he is transgender and a boy. He began to openly identify as a boy during the 2013‐2014 school year, when he entered Tremper as a freshman. He cut his hair, began to wear more masculine clothing, and began to use the name Ashton and male pronouns. In the fall of 2014, the beginning of his sophomore year, he told his teachers and his classmates that he is a boy and asked them to refer to him as Ashton or Ash and to use male pronouns.”

It goes on to describe how she was told she could use a gender-neutral restroom in the school’s main office, but not the boys’ restrooms. She was troubled by that because that restroom was far from her classes and that it would further stigmatize her as transgender. Also, Whitaker has a medical condition that required her to drink lots of water, making it hard to avoid using restrooms. The school later made another restroom specially available to her, but she claimed that restroom, too, was inconvenient for her.

The Appeals Court decision states that “the School District argues that the district court erred in finding that the harms to Ash outweighed the harms to the student population and their privacy interests. We disagree. The School District has failed to provide any evidence of how the preliminary injunction will harm it, or any of its students or parents.”

It states, “The harms identified by the School District are all speculative and based upon conjecture, whereas the harms to Ash are well‐documented and supported by the record.”

Ash Whitaker’s mother, Melissa, who teaches at her school, told CBS-Chicago that the ruling shows “There’s still a lot of hate in the world … misunderstanding, definitely, but there’s a lot of hope.”

Last year, Ash Whitaker also fought successfully for her right to run for “Prom King” at the same Tremper High School, as the Kenosha school district overturned the school’s decision not to let the biological girl be a part of the traditionally male competition.