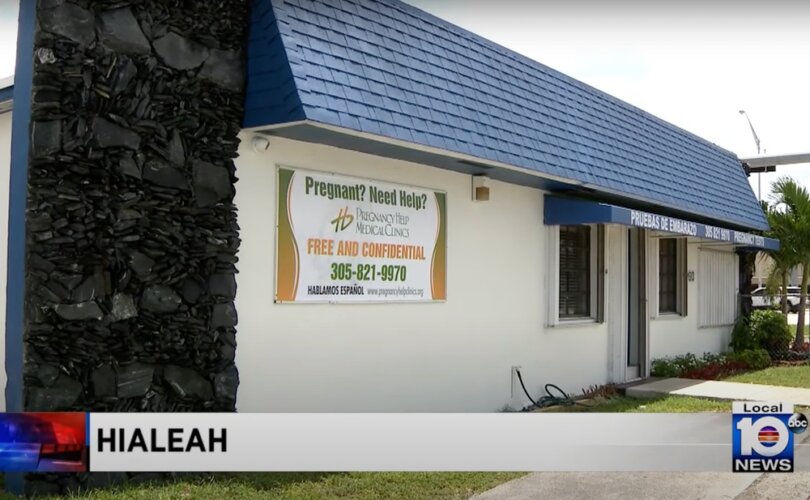 (LifeSiteNews) — Two pro-abortion activists have been indicted by a federal grand jury for allegedly vandalizing pro-life pregnancy centers and conspiring “to prevent employees of reproductive health services facilities from providing those services.”

According to a press release published Tuesday by the Biden administration’s Justice Department, the indictment was returned by a federal grand jury in the Middle District of Florida.

“According to the indictment, as part of the conspiracy, the defendants targeted pregnancy resource facilities and vandalized those facilities with spray-painted threats,” the DOJ said.

Freestone and Smith-Stewart are also alleged to have conspired with others to spray-paint threatening messages on the pregnancy centers. The pair and their co-conspirators are alleged to have vandalized a pro-life center in Winter Haven, Florida, with messages including, “If abortions aren’t safe than [sic] niether [sic] are you,” “YOUR TIME IS UP!!,” “WE’RE COMING for U,” and “We are everywhere.”

Winter Haven wasn’t their only target, according to the indictment, which also alleges that the pair attacked pro-life centers in Hollywood, Florida, and Hialeah, Florida.

— Article continues below Petition —
Stand with pro-life priest Fr. Fidelis as he faces jail for defending unborn babies
Show Petition Text
13322 have signed the petition.
Let's get to 15000!
Thank you for signing this petition!
Add your signature:
Show Petition Text

Security footage from the Hialeah clinic appears to show a man and a woman walking onto the property before spray-painting messages on the outside walls. It’s unclear if the man and woman are Freestone and Smith-Stewart.
If convicted, the duo could face up to 12 years behind bars along with “three years of supervised release and fines of up to $350,000,” according to the DOJ.

News of the indictment comes after months of silence from the Justice Department as pro-abortion activists vandalized and firebombed pro-life pregnancy centers and churches and made violent threats against pro-lifers.

The Biden administration’s law enforcement agencies have drawn sharp criticism from pro-lifers for their failure to pursue arrests and indictments even as pro-life advocates like Mark Houck and Paul Vaughn were subjected to raids by heavily-armed FBI agents for their alleged violations of the FACE Act.

Last week, the FBI appeared to take a step toward stronger law enforcement action, announcing a $25,000 reward for information about attacks on the pro-life centers.

The move came shortly after the newly-GOP controlled U.S. House of Representatives resolved to create a “Weaponization of Government” Select Committee to investigate “the politicization of the FBI” among other agenda items.

The committee is set to consider 11 instances of such alleged politicization of the FBI and the DOJ, including the use of the FACE Act to arrest pro-lifers like Houck and Vaughn.

The indictment of the pro-abortion activists also coincides with Houck’s criminal trial, which is taking place this week and is slated to conclude Friday.

Houck was arrested by heavily-armed FBI agents last year after he allegedly pushed an abortion clinic “escort” who his attorneys say had been verbally harassing his young son using vulgar language. Houck now faces two felony charges for allegedly violating the FACE Act, which his legal team argues doesn’t even apply in his case. If convicted, he faces 11 years in prison and fines totaling as much as $350,000.

In a statement published on the Thomas More Society’s website, Houck’s attorney, Peter Breen, called the situation “a sidewalk squabble that has turned into a federal case.”

“It should have ended in the state courts, which threw this matter out, but unfortunately the Biden Department of Justice has decided to take an intimidation tack against pro-life people and people of faith,” Breen said.