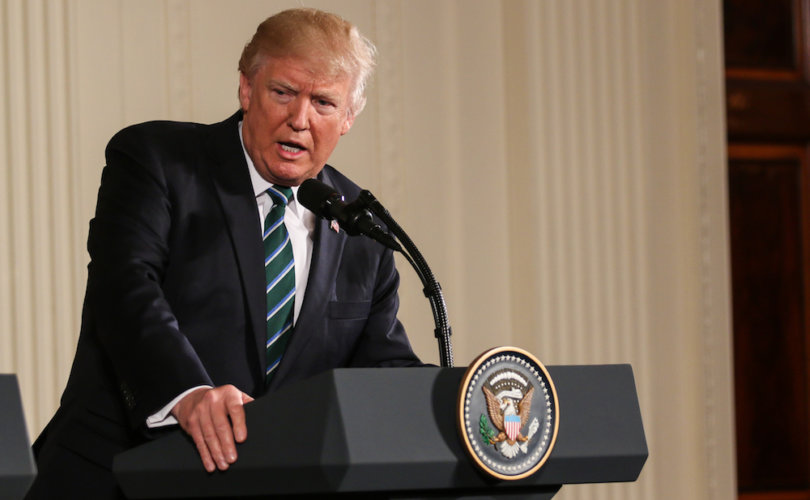 U.S. District Judge Marvin Garbis issued a preliminary injunction against the ban Tuesday. He wrote that transgender service members had “demonstrated that they are already suffering harmful consequences” due to the policy.

Garbis cited as consequences, “the cancellation and postponements of surgeries, the stigma of being set apart as inherently unfit, facing the prospect of discharge and inability to commission as an officer, the inability to move forward with long-term medical plans, and the threat to their prospects of obtaining long-term assignments.”

The six plaintiffs in the lawsuit have all been receiving hormone therapy, according to a report from NBC News.

Trump announced the ban in July via Twitter. The proposed order reinstates a previous longtime ban on transgender military service that had been struck down last year by former President Barack Obama.

Garbis took aim at the president in his decision, writing, that the “capricious, arbitrary, and unqualified tweet of new policy does not trump the methodical and systematic review by military stakeholders qualified to understand the ramifications of policy change.”

The Federal Government said in a court filing Tuesday it was appealing Kollar-Kotelly's decision.

U.S. Department of Justice spokeswoman Lauren Ehrsam said Administration officials disagreed with Garbis' ruling, according to the NBC report, and that they are weighing specifics of what to do next.

“(The) plaintiffs' lawsuit challenging military service requirements is premature for many reasons, including that the Defense Department is actively reviewing such service requirements, as the President ordered, and because none of the plaintiffs have established that they will be impacted by current policies on military service,” Ehrsam said in an emailed statement.

Trump then signed a presidential memo in August prohibiting the military from enlisting transgender individuals and using government funds for gender transition-related surgery those already enlisted. The memo also gave Secretary of Defense James Mattis six months to decide what to do with transgender troops already serving.

“As directed by the Department of Defense guidance,” Wright said, “no action may be taken to involuntarily separate or discharge an otherwise qualified service member solely on the basis of a gender dysphoria diagnosis or transgender status.”

The American Civil Liberties Union (ACLU) had filed a motion for a preliminary injunction against the ban in September, and filed the lawsuit on behalf of the six transgender plaintiffs.

The transgender ban is also being challenged in federal court in Seattle in a suit brought by gay advocacy group Lambda Legal.