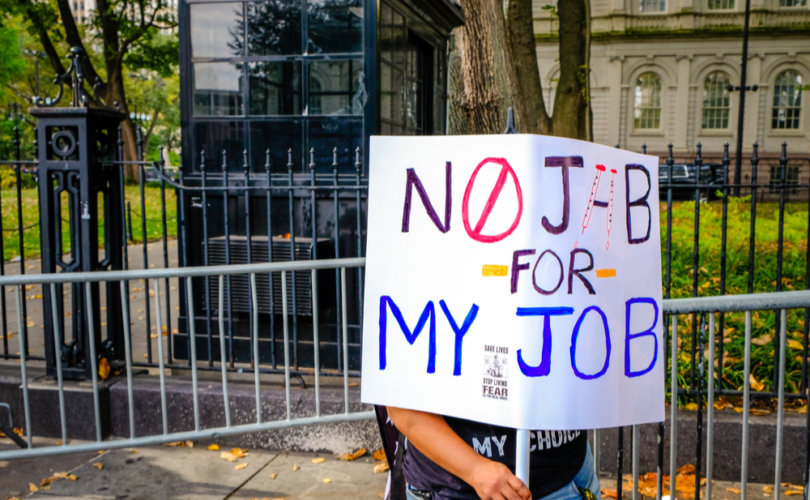 (LifeSiteNews) — A federal judge sided with South Carolina’s attorney general and blocked the Biden administration’s COVID-19 jab mandate for federal contractors, stalling the requirement nationwide and marking the third federal injection mandate to be blocked across all 50 states.

Fortune reported that the federal contractor mandate, intended to to take effect on January 4, would have affected “roughly a quarter of the U.S. workforce,” targeting “companies that do business with the federal government, including Lockheed Martin Corp., Microsoft Corp., Alphabet Inc.‘s Google, and General Motors Co.”

The Georgia court’s ruling against the requirement is the latest in a series of strikes against President Joe Biden’s attempts to force vast swaths of Americans to get the experimental COVID-19 shots.

Federal judges across the country have ruled against the mandates after states, corporations, and individuals filed lawsuits to halt the sweeping requirements, arguing that the Biden administration does not have the authority to mandate the jabs and that the extensive rules violate the U.S. Constitution.

Tuesday’s decision came just over a week after two of the Biden administration’s injection mandates were dealt massive blows in the federal courts, with a Louisiana judge halting the mandate for healthcare workers nationwide and a Kentucky judge blocking the federal contractor mandate in Kentucky, Tennessee, and Ohio.

The move also comes just a month after the U.S. Court of Appeals for the Fifth Circuit temporarily halted the Biden administration’s jab mandate that would require businesses with 100 or more employees to force workers to either get the experimental shot or be subject to weekly testing and other requirements, later rejecting an appeal from the federal government to lift the stay.

The mandate for private businesses, which was bureaucratically developed through the auspices of the Occupational Safety and Health Administration (OSHA), was last month moved to the U.S. Court of Appeals for the Sixth Circuit, which is now set to hear consolidated challenges to the rule.

The Sixth Circuit Court has so far denied a request by the federal government to transfer the case back to the Fifth Circuit, and rejected another request to move the case to the D.C. Circuit.

Meanwhile, federal agencies themselves have withdrawn their own mandates.

Last month, OSHA announced it would suspend enforcement of its mandate pending litigation.

Similarly, the Biden administration’s Centers for Medicare & Medicaid Services (CMS) has announced it will temporarily halt enforcement of its healthcare worker mandate pending appeal of a federal injunction blocking the measure.

The Biden administration’s significant losses in federal court have been hailed by conservatives as victories for individual liberties and the constitutional order, while Americans with serious objections to the jabs have seen their medical freedoms at least temporarily protected by the judicial rulings.

A federal court in Georgia has entered a nationwide injunction against the federal-contractor vaccine mandate.

Now ALL of the Biden Administration vaccine mandates have been halted.

Now, under my Order, vaccine mandates are not allowed in Texas.

Despite a massive campaign to encourage and coerce widespread immunization against COVID-19, many Americans remain concerned that the injections have not been sufficiently studied for negative effects given their accelerated clinical trials, and some harbor ethical reservations about the use of cells from aborted babies in their development.

Still others simply consider them unnecessary given COVID-19’s high survivability among most groups, low risk of asymptomatic spread, and research indicating that post-infection natural immunity is equally protective against reinfection.

Meanwhile, list of FDA-recognized adverse events to the COVID-19 shots have grown from severe anaphylactic reactions to include fatal thrombotic events, the inflammatory heart condition myocarditis, and neurologically disabling disease like Guillain Barré Syndrome, as well as thousands of recorded deaths and permanent disabilities.

The CDC reports a COVID-19 infection survival rate of greater than 99.95% for those under age 50 without vaccination.