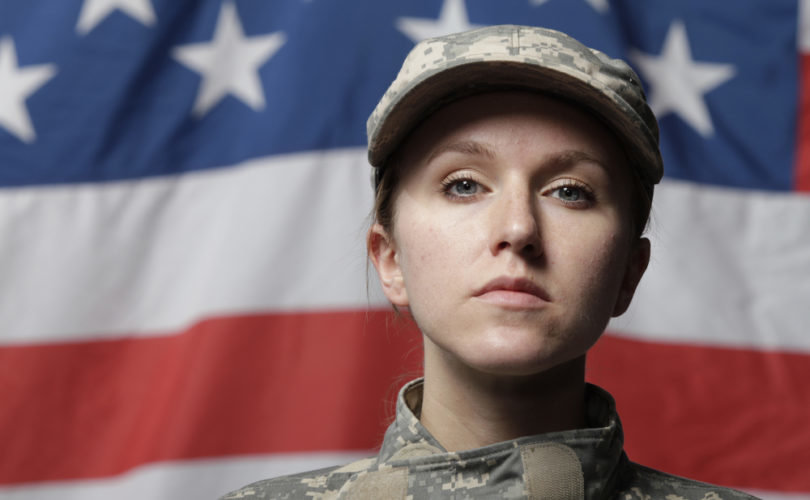 HOUSTON, February 25, 2019 (LifeSiteNews) – A federal judge in Texas declared that women must be included in the military draft that heretofore has been for men only.

Senior U.S. District Judge Gray Miller ruled late Friday that restrictions placed on women in the past from serving in combat “may have justified past discrimination” because both men and women are equally capable of military service. Since 2015, women have been allowed to serve in nearly any capacity in the U.S. military.

“If there ever was a time to discuss 'the place of women in the Armed Services,' that time has passed,” he wrote, citing an earlier Supreme Court decision.

Brought by the National Coalition For Men and two individual men who argued that a draft for men only is unfair, it came while a federal commission is examining the Selective Service System and whether draft registration should be continued. The commission is also studying whether women should be included in the draft. The draft was suspended in 1973 but reactivated in 1980 as a contingency in case military conscription becomes necessary again. The United States has maintained an all-volunteer force for decades.

In January, the National Commission on Military, National and Public Service released an interim report that offered no clues as to how it will view the above issues. While the government had argued in court that a ruling should be delayed until the commission makes its recommendations, Judge Miller said Congress has debated the drafting of women since 1980. The judge said the commission’s report is not due until 2020. Because the commission is advisory, there is no assurance that Congress will act.

Saying Congress has never fully examined whether men are physically better able to serve than women, the judge noted that “the average woman could conceivably be better suited physically for some of today's combat positions than the average man, depending on which skills the position required. Combat roles no longer uniformly require sheer size or muscle.”

According to the judge, the government needed to demonstrate that registering men only “substantially related to Congress' important objective of drafting and raising combat troops.” The government unsuccessfully argued that requiring registration women may make them less likely to enlist by “increasing the perception that women will be forced to serve in combat roles,” he said. The argument, he wrote, “smacks of archaic and overbroad generalizations” about women and their preferences. “Defendants' argument rests on the assumption that women are significantly more combat-averse than men,” the judge declared while saying that the government had not produced any evidence to support that claim.

Quoting the Supreme Court’s decision in Obergefell v. Hodges, which the due process clause and the equal protection clause of the U.S. Constitution established a right to same-sex “marriage,” Miller found that restrictions on the basis of gender “must substantially serve an important governmental interest today.” He denied the government’s request for a stay of the ruling. “The male-only registration requirement of the Military Selective Service Act, 50 U.S.C. § 3802(a), violates the Due Process Clause of the Fifth Amendment to the United States Constitution,” read Miller’s “final judgment.”

However, Miller’s decision was issued as a declaratory judgment and not an injunction, which means that he did not order the government how to change Selective Service to make it constitutional. Currently, the Military Selective Service Act (MSSA) calls on men in the U.S. ages 18 through 25 to register in case the country needs a military draft. Women are not required to register. “The dispositive fact” in that case — that women are ineligible for combat — “can no longer justify the MSSA's gender-based discrimination,” Miller wrote.

“Forcing only males to register is an aspect of socially institutionalized male disposability,” said the National Coalition for Men in a statement. “Men still face prison, fines, and denial of federal loans for not registering or for not updating the government of their whereabouts.” Women, it said, “should face the same repercussions as men for any noncompliance.”

To win its case, the government needed to show that the male-only registration requirement was “substantially related to Congress's important objective of drafting and raising combat troops,” Judge Miller wrote. The government argued that requiring women to register for the draft might make them less likely to enlist by “increasing the perception that women will be forced to serve in combat roles,” he said.

But that argument, Miller said, “smacks of archaic and overbroad generalizations” about women's preferences. “Defendants' argument rests on the assumption that women are significantly more combat-averse than men,” the judge said.