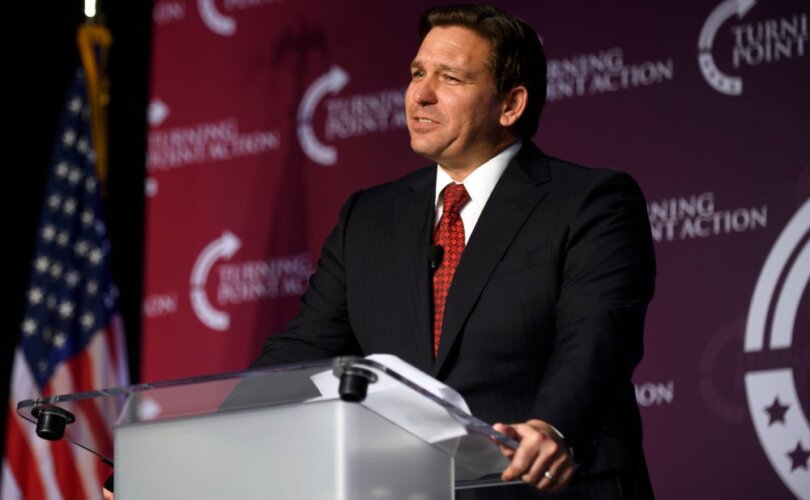 (LifeSiteNews) — A federal judge sided with Florida’s Republican Gov. Ron DeSantis on Thursday, opting to toss out a challenge to the state’s law prohibiting sexual content in school curricula for young children.

Orlando-based U.S. District Judge Wendy Berger, a Trump appointee, handed down the 28-page decision on October 20, denying a request for a preliminary injunction against Florida’s Parental Rights in Education Act.

Plaintiffs in the case had argued the law was intended to advance discrimination and could lead to the bullying of children with confused “gender identities.” However, Berger noted that the “[p]laintiffs have not pointed this court to any policy or procedure …that they allege has resulted in an increase in bullying.”

While the federal judge said “the court is sympathetic” to the notion that a child could be bullied at school over gender related issues, “middle school children bully and belittle their classmates for a whole host of reasons, all of which are unacceptable, and many of which have nothing to do with a classmate’s gender identity.”

This was the second challenge tossed out in one month. https://t.co/RdGDLiTuhc

READ: How mainstream media are lying to the public about new laws to protect kids from the LGBT agenda

The Thursday decision marks the second time in under a month that a federal judge has refused to prevent enforcement of the Parental Rights in Education Act, which has been widely mischaracterized as the “Don’t Say Gay” bill by left-wing critics.

Earlier this month, U.S. District Judge Allen Winsor, another Trump appointee, dismissed a separate attempt to challenge the law, stating that the plaintiffs lacked standing because “most of plaintiffs’ alleged harm is not plausibly tied to the law’s enforcement so much as the law’s very existence.”

Both Berger and Winsor said the plaintiffs could file revised versions of their original complaints.

The Florida law in question bars schools in the Sunshine State from teaching children from kindergarten through third grade about transgenderism and other issues related to gender ideology or sexuality.

The legislation also limits discussions of sexuality for older children to “age appropriate” content, and mandates that parents be informed of any changes that could affect their child’s physical, emotional, or mental well-being, including whether a child identifies as another gender “identity” at school.

Critics have baselessly argued that the Parental Rights bill is a hateful attack against teachers and students who identify as LGBT, and have contended that teachers aren’t attempting to indoctrinate schoolchildren into radical sexual ideology. The argument comes despite myriad examples of teachers actively engaging in pro-LGBT activism in their classrooms.

Meanwhile, amid wall-to-wall criticism from left-wing media and corporations but broad support from parents and conservatives, DeSantis has consistently defended the legislation, arguing it ensures that kids are educated in schools, not indoctrinated into radical ideologies.

“As students head back to their classrooms this fall, I’m happy to clear up any ‘confusion’ the media may have about appropriate curriculum,” DeSantis said in August, adding that “Math, Reading, Writing,” were appropriate for the classroom while “CRT, Sexualized Content, Transgender Ideology” were not.

As students head back to their classrooms this fall, I’m happy to clear up any “confusion” the media may have about appropriate curriculum:

Florida schools will educate children, not indoctrinate them.

Under the new law, Florida has already rejected large numbers of textbooks due to objectionable content, prompting publishers to revise them to better adhere to Florida law.

The Parental Rights in Education Act is just one of the measures DeSantis has advanced to improve the Florida education system and strip out ideological content.

Last week, the Florida Board of Education passed a new guideline requiring Florida schools to inform parents of any pro-LGBT policies, including rules allowing “transgender” students to use bathrooms or locker rooms that don’t correspond to their actual, biological sex.

During his tenure as governor of Florida, DeSantis has generated widespread support among conservatives for fighting liberty-crushing COVID-19 measures, backing law enforcement, limiting abortion, and working to uproot radical ideologies from the classroom. Many see the firebrand governor as a strong contender for the U.S. presidency in 2024.