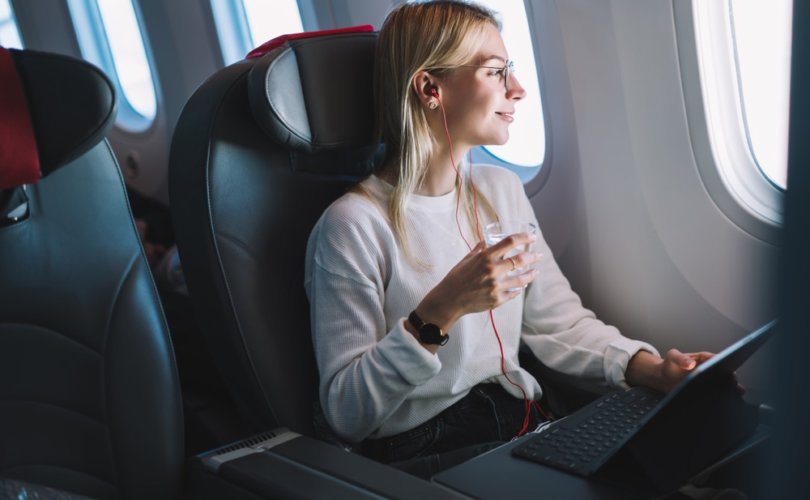 TAMPA, Florida (LifeSiteNews) — Americans will no longer be required to wear masks on airplanes thanks to a ruling handed down Monday by a Florida-based federal judge.

“Because ‘our system does not permit agencies to act unlawfully even in the pursuit of desirable ends,’ the court declares unlawful and vacates the mask mandate,” Mizelle wrote in her 59-page ruling, which voided the mandate just days after the CDC had elected to extend it for another 15 days.

I encourage everyone to read US District Judge Kathryn Mizelle’s 59-page ruling in favor of the plaintiffs in striking down the federal transit mask mandate. It’s thoughtful and evidence-based: https://t.co/RiFYxdUCGc @DrJBhattacharya @adamcarolla @ZDoggMD @afshineemrani

RELATED: Masks ‘don’t add much, if anything,’ to safety, airline CEOs tell Congress

The district court judge’s decision came in response to a lawsuit filed in July, 2021 by the nonprofit Health Freedom Defense Fund (HFDF), which has launched a bevy of lawsuits challenging coercive COVID-19 mandates and requirements since last year.

HFDF has called the Monday ruling a “victory for basic American liberty and the rule of law.”

“Without any public comment, or serious scientific justification, CDC bureaucrats imposed a sweeping Travel Mask Mandate applying to every American over the age of two,” HFDF President Leslie Manookian explained in a press release.

“There are laws that set boundaries for federal agencies to protect individual freedom, and the Court clearly found that CDC exceeded those limits,” Manookian added. “Unelected officials cannot do whatever they like to our personal freedoms just because they claim good motives and a desirable goal.”

The New York Post noted that the HFDF’s lawsuit was filed “on behalf of two women who claimed that wearing masks on airplanes triggered or exacerbated anxiety and panic attacks.”

Mizelle stated in her ruling that “the only remedy was to vacate the rule entirely because it would be impossible to end it solely for the two plaintiffs, writing that ‘a limited remedy would be no remedy at all.’”

Within hours of the court’s decision, major U.S. airlines including United, Southwest, American, and Alaska, released statements affirming that their mask mandates had been lifted, making mask-wearing optional for all domestic flights. Uber, Amtrak, and other public transportation companies have also announced they will scrap their mask rules.

In its April 18 press release, Southwest Airlines said that, starting Monday, employees and customers “will be able to choose whether they would like to wear a mask, and we encourage individuals to make the best decision to support their personal wellbeing.”

Masks are no longer required on domestic flights, select international flights (dependent upon the arrival country’s requirements) or at U.S. airports. More comfortable keeping yours on? Go right ahead… the choice is yours (you look dino-mite either way)! pic.twitter.com/hwq678v55d

Videos shared on social media have shown airplane passengers responding with applause following announcements from crew members that masks would no longer be required.

Pilot announces an end to Biden’s Mask Mandate, the reaction from everyone on the plane says it all.

This is awesome 🇺🇸

The Biden administration initially signaled it was not happy with the decision to void the mandate, giving rise to speculation they might move to challenge the ruling.

White House Press Secretary Jen Psaki responded to the rollback of the mask rule by calling the decision “disappointing,” and urged travelers to continue masking up on airplanes regardless of the ruling.

Hours later, a Biden administration official noted the Transportation Security Administration (TSA) would no longer enforce the federal mask mandate thanks to the Florida judge’s ruling, but said that federal agencies are “assessing potential next steps.”

“The agencies are reviewing the decision and assessing potential next steps,” the official said, according to The Hill. “In the meantime, today’s court decision means CDC’s public transportation masking order is not in effect at this time.”

“Therefore, TSA will not enforce its Security Directives and Emergency Amendment requiring mask use on public transportation and transportation hubs at this time,” the official added.

Despite the Biden administration’s evident disappointment with seeing the mask mandate withdrawn, the rule had become increasingly controversial over the past months, with numerous states, lawmakers, and even airline executives calling on the federal government to drop the rule.

“It makes no sense that people are still required to wear masks on airplanes, yet are allowed to congregate in crowded restaurants, schools and at sporting events without masks, despite none of these venues having the protective air filtration system that aircraft do,” the executives wrote.

The letter directed to President Biden came after the CEOs of Southwest Airlines and American Airlines testified in a December Senate committee hearing that masks did little, if anything, to stop the spread of COVID-19 on planes.

Meanwhile, in a bipartisan rebuke last month, the U.S. Senate voted 57-40 against the ongoing federal mask mandate for public transportation after Republican Sen. Rand Paul of Kentucky introduced a resolution calling for an immediate end to the requirement.

“We’ve been very clear that we want people to be able to make their own decisions. We don’t believe in COVID theater,” Florida Gov. DeSantis said during a press conference, adding that “forcing people to wear masks on airplanes” isn’t “something that’s grounded in any science.”