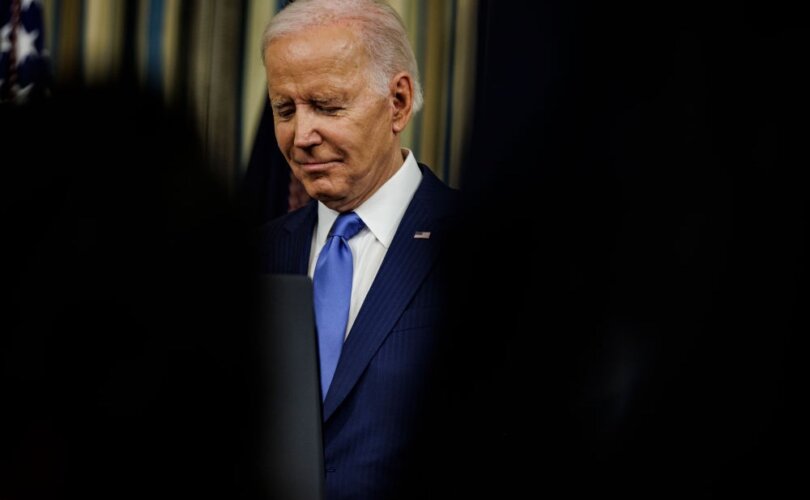 U.S. President Joe Biden takes questions from reporters, after he delivered remarks in the State Dining Room, at the White House on November 9, 2022, in Washington, D.C.Photo by Samuel Corum/Getty Images

U.S. District Judge Matthew Kacsmaryk in Amarillo, Texas, ruled November 11 that federal law does not prohibit healthcare providers from discriminating on the basis of sexual orientation or gender identity, contrary to the Biden administration’s interpretation of an Obamacare provision, Reuters reported.

The Biden administration’s HHS announced in May 2021 it would reinterpret the policy in light of the U.S. Supreme Court’s 2020 decision in Bostock v. Clayton County, which declared that the Civil Rights Act of 1964 prohibited discrimination based on sexual orientation and gender identity in addition to biological sex.

In his Friday decision, however, Kacsmaryk said the Biden administration’s interpretation of Section 1557 of the Affordable Care Act (Obamacare) was erroneous, since the Bostock ruling “does not apply to Section 1557 or Title IX.”

According to the Trump-appointed judge, the HHS’ arguments attempting to “retroactively apply Bostock” to Section 1557 were “unpersuasive.” He pointed out that while “Congress could have included ‘sexual orientation’ and ‘gender identity’ in the statutory text,” it “chose not to.”

“Instead, Congress limited Section 1557’s protections to those afforded by other federal statutes — including Title IX. Because Title IX does not protect ‘sexual orientation’ or ‘gender identity’ status, neither does Section 1557,” Kacsmaryk wrote.

Dr. Susan Neese and Dr. James Hurly argued in the suit that the Biden administration’s transgender policy exceeded the scope of the law and would inhibit their ability to appropriately perform their medical duties and receive funding.

In the suit, Dr. Neese expressed concern she would be barred from refusing to prescribe transgender hormone drugs to minors “in situations where a patient’s denial of biological realities will endanger their life or safety.”

Dr. Hurley shared that he “has encountered situations” in which he was forced to “insist that a patient acknowledge his biological sex rather than the gender identity that he asserts” in order to provide adequate treatment. In an example, he said he treated a man who suffered from prostate cancer but identified as a woman. Hurley told the man that “he was indeed a biological man with a prostate, and that he needed to seek urgent medical care … ”

The Friday decision comes as conservatives have seemingly made gains in their fight against radical transgender ideology and its far-reaching impacts on healthcare, education, law, and the physical and emotional well-being of minors and adults.

Late last month, the Florida Board of Medicine’s legislative committee voted to ban transgender drugs and surgeries for minors statewide.

In an October 28 letter to the National Institutes of Health (NIH), Republican U.S. Rep. Paul Gosar of Arizona urged that officials investigate the actual science behind so-called “Gender Affirming Care” for minors.

“Gender-affirming care (GAC) includes the use of puberty blockers and cross-sex hormones that can lead to infertility and other serious permanent medical maladies,” Gosar wrote, adding that the “removal of sexual organs,” which “is also considered GAC … is obviously irreversible.”

“That any of these surgeries and treatments are being provided to minors is nothing short of child abuse,” he argued