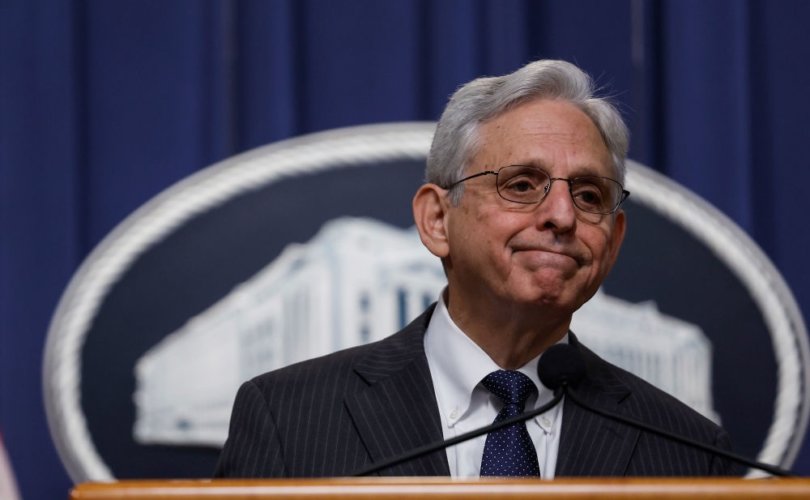 U.S. Attorney General Merrick Garland listens to a question during a press conference on June 13, 2022 in Washington, DC.Photo by Anna Moneymaker/Getty Images

WASHINGTON, D.C. (LifeSiteNews) — A federal judge last week dismissed a lawsuit filed by a group of parents against U.S. Attorney General Merrick Garland over his infamous memo mobilizing the FBI to help curb alleged “threats” posed by parents who objected to policies and curricula at school boards meetings.

On Friday, Trump-appointed District Judge Dabney Friedrich threw out the lawsuit, which had been brought against Garland last year by an association of parents in Michigan and Loudoun County, Virginia, The Epoch Times reported.

“Because the plaintiffs have not sufficiently alleged that they will suffer a reputational or other cognizable injury caused by the AG Policy, they lack standing to challenge the policy,” Friedrich wrote.

A lawsuit filed by #Parents against Attorney General #MerrickGarland for a memo he wrote, which characterized parents protesting against school district policies as a threat, was dismissed by a federal judge. https://t.co/BgQlvIJ8Lz

In their October 29, 2021 lawsuit, the plaintiffs sought to enjoin the attorney general from enforcing his policy allegedly targeting parents concerned about what their children were being taught in school.

According to the plaintiffs, Garland’s memo had smeared them as “domestic terrorists,” criminalized their speech, and unlawfully marshaled federal law enforcement resources to “silence parents and other private citizens.”

The lawsuit contended that conservative parents were being targeted by the Biden administration’s DOJ for speaking out against “the divisive, harmful, immoral, and racist policies of the ‘progressive’ Left that are being implemented by school boards and school officials in public school districts throughout the United States.”

The complaint stemmed from the Biden Justice Department’s October 4 memo in which Garland sparked outrage by directing federal law enforcement to respond to an allegedly “disturbing spike in harassment, intimidation, and threats of violence against school administrators, board members, teachers, and staff.”

Garland announced in the memo he was directing the FBI to help local law enforcement agencies to “discourage these threats, identify them when they occur, and prosecute them when appropriate.”

The directive came amid a nationwide wave of conservative parents showing up to school board meetings to express their disapproval of policies and curricula ranging from COVID-19 mask rules to Critical Race Theory and radical gender ideology.

Days before the attorney general’s memo, the National School Boards Association had (NSBA) had penned a letter to the DOJ characterizing the trend of parents airing their grievances at schools boards as “domestic terrorism,” warning that schools faced an “immediate threat,” and calling on the DOJ to exercise its authority under the post-9/11 PATRIOT Act meant to stop terrorist attacks.

Internal emails later indicated that the NSBA had collaborated with the DOJ and White House “for weeks” to draft the letter characterizing concerned parents as potential domestic terror threats, Fox News reported in November.

On Friday, however, Judge Friedrich said the parents who filed suit against Garland lacked standing, because the attorney general did not direct the FBI to engage in direct enforcement action against the plaintiffs or anyone else.

“The alleged AG Policy is not regulatory, proscriptive, or compulsory in nature because it does not impose any regulations, requirements, or enforcement actions on individuals,” Friedrich wrote in her decision.

“None of the documents that the plaintiffs allege establish the policy create an imminent threat of future legal actions against anyone, much less the plaintiffs,” she continued.

According to Friedrich, the controversial memo had merely described a plan to “‘announce a series of measures’ in the future,” directing the FBI to convene localized meetings and open “dedicated lines of communication for threat reporting, assessment, and response” without mandating “any particular regulatory or enforcement action.”

Garland has stated in sworn testimony that the DOJ was not adopting counterterrorism measures to combat alleged threats from parents at school board meetings.

“I do not believe that parents who testify, speak, argue with, complain about school boards and schools should be classified as domestic terrorists or any kind of criminalism,” Garland said last October, adding that he was only worried about “true threats of violence.”

However, Republican Reps. Jim Jordan of Ohio and Mike Johnson of Louisiana told Garland in May that, according to FBI whistleblowers, the bureau had indeed opened investigations related to school boards, The Epoch Times pointed out.

“The information we have received shows how, as a direct result of your directive, federal law enforcement is using counterterrorism resources to investigate protected First Amendment activity,” the letter read.

In one instance, according to the letter, the FBI opened an investigation ”into a dad opposed to mask mandates.”

“The complaint came in through the National Threat Operations Center snitch-line and alleged that the dad ‘fit the profile of an insurrectionist’ because he ‘rails against the government,’ ‘believes all conspiracy theories,’ and ‘has a lot of guns and threatens to use them,’” the letter read.

The lawmakers added that after “an FBI agent interviewed the complainant, the complainant admitted they had ‘no specific information or observations of … any crimes or threats,’ but they contacted the FBI after learning the Justice Department had a website ‘to submit tips to the FBI in regards to any concerning behavior directed toward school boards.’”