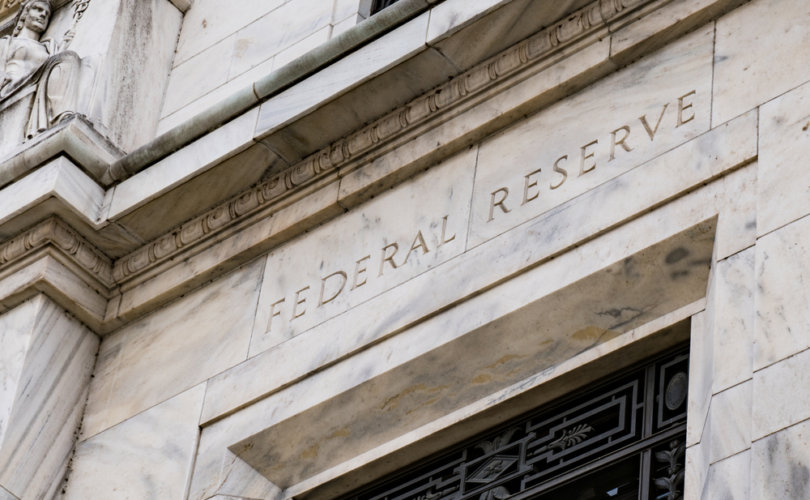 (LifeSiteNews) — In lockstep with the “Great Reset,” the Federal Reserve has announced it will be opening up a debate over whether the United States should adopt a central bank digital currency.

The Federal Reserve announced Thursday a “public comment” debate forum as the “first step” in seriously considering the introduction of a “Central Bank Digital Currency” (CBDC). The “discussion” will involve looking at the “pros and cons” of implementing a digital currency to “improve the safe and effective domestic payments system.”

“We look forward to engaging with the public, elected representatives, and a broad range of stakeholders as we examine the positives and negatives of a central bank digital currency in the United States,” Federal Reserve Chair Jerome H. Powell said in the release.

“Consumers and businesses have long held and transferred money in digital forms, via bank accounts, online transactions, or payment apps. The forms of money used in those transactions are liabilities of private entities, such as commercial banks. Conversely, a CBDC would be a liability of a central bank, like the Federal Reserve,” the Fed explained.

According to the Fed, there exists an importance to investigate adopting a digital currency, because if other countries start their own central bank digital currency and much of the world hops on board with its use, “global use of the [US] dollar could decrease” and harm the American economy.

However, some of the potential implications are worrisome, as the Fed states that a CBDC would allow “governments” to “use a CBDC to collect taxes or make benefit payments directly to citizens,” suggesting that governments would have full access to the funds of private citizens.

Despite the potential decrease in personal autonomy over one’s finances, Sen. Pat Toomey (R-PA) expressed support to the Fed for “constructively” contributing to the ongoing debate, indicating he supports the institution’s endeavor in considering a CBDC.

However, many people from around the world have expressed grave concern over the adoption of such a radically novel system.

“If the central bank maintains a single ledger of all transactions, then it is also in a position to know virtually everything that is going on in the world around it,” wrote the Daily Telegraph’s assistant editor Jeremy Warner, after the United Kingdom announced a similar plan for a CBDC last year.

“Credit provision might instead be concentrated in the hands of the state. Is this a shake-up we really want to pursue?” asked Warner.

The push for digital currency, a growing trend among world leaders, has been proven to be one of the hallmarks of the World Economic Forum’s “Great Reset.”

The leader of the Forum, Klaus Schwab, suggested that an alternative currency will be needed since the American dollar will be insufficient. He predicted that a global digital currency is eventually going to arrive.

Currently, global debt levels are at their highest point since the Second World War and are only predicted to increase. To combat this, the architects of the “Great Reset” are poised to counter the economic crisis by enacting their plan to “reimagine” and “reset” capitalism.

According to Schwab, the financial crisis brought about by massive government spending due to COVID-19, combined with other so-called crises such as “climate change,” means world governments “must build entirely new foundations for our economic and social systems.”

“There are many reasons to pursue a Great Reset,” Schwab alleged, “but the most urgent is COVID-19.”

The International Monetary Fund published an article in March of last year, arguing for the use of internet history to determine a Chinese-style system of social credit scoring, which could then “be used in financial services provision.” Such a plan would only be easier to implement with a centrally-controlled digital system.

Just earlier this week, at the opening of the WEF’s “Davos Agenda 2022” annual globalist summit, Schwab praised Chinese communist leader Xi Jinping for his country’s “significant social and economic achievements” while conveniently ignoring the totalitarian regime’s infringement on human rights, which include organ harvesting, religious-based persecution, perhaps even genocide, and laws dictating the number of children families can have.

In Schwab’s own words, “To achieve a better outcome [for a globally-connected society], the world must act jointly and swiftly to revamp all aspects of our societies and economies, from education to social contracts and working conditions. Every country, from the United States to China, must participate, and every industry, from oil and gas to tech, must be transformed. In short, we need a ‘Great Reset’ of capitalism.”