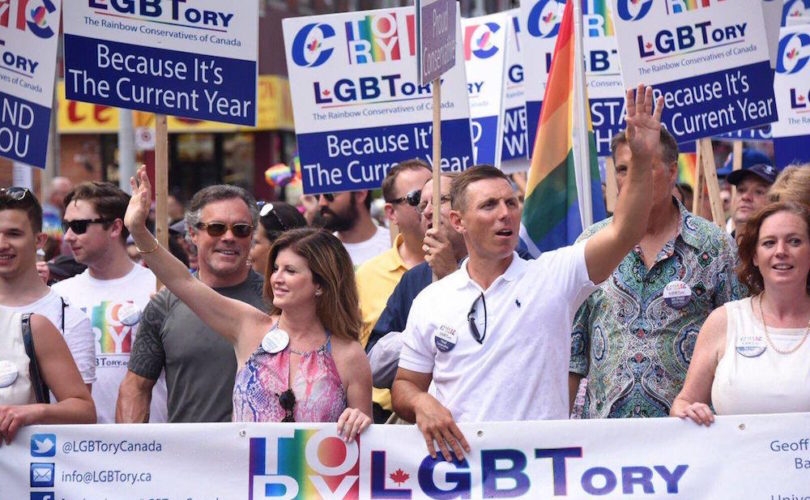 TORONTO, July 6, 2016 (LifeSiteNews) — Scarcely five weeks after the Conservative Party of Canada struck the definition of marriage as between one man and one woman from its policy declaration, CPC Interim Leader Rona Ambrose, and all three Tory MPs who have so far declared as leadership contenders, marched in Toronto’s Pride Parade Sunday.

Ambrose and the three leadership candidates — Kellie Leitch, Michael Chong and Maxime Bernier — marched behind the LGBTory banner, which declared: “The right side of history.”

It’s the first time a federal Conservative leader has taken part in the annual event, which is said to be the largest in Canada, and which is notorious for displays of nudity, lewd dancing, and raucous aping of sexual deviations such as sadomasochism, bondage, and cross-dressing — all of which were on display on a sunny July 3 in downtown Toronto.

An activist group within the Conservative ranks, LGBTory organized last year’s first-ever Tory contingent in Toronto’s Pride Parade, headed by Brown, then it subsequently pushed for the CPC to delete the traditional definition of marriage from its policy book, which the party did at its Vancouver policy convention in May.

The strong showing of top Tory MPs and MPPs at this year’s Parade demonstrates the “changing face of Canadian Conservatism,” wrote Andrew Donovan on the LGBTory Symposium.

“Yes, this show of support should put to rest any doubt critics had about whether or not conservative politicians in Canada overwhelmingly support LGBTQ rights,” Donovan observed.

“Let’s face it, the old guard’s time is dwindling. As conservative millennials become a larger percentage of the voting population, the demand for government to let Canadians live and let live is only going to increase.”

But Jeff Gunnarson, vice president of Campaign Life Coalition, sees it much differently.

“It is not clear to us the benefit politicians see in participating in a parade that features acts of moral depravity,” he told LifeSiteNews. “I’m not sure if many of the people attending would be willing to jump on an election campaign.”

“Pro-life social conservatives are the people politicians should be clamouring to impress,” Gunnarson said. “We will nominate you, knock doors for you and vote for you. You lose all that when you march in pride parades.”

And Tory politicians would do well to remember that “social conservatives make up 40 percent of the capital ‘C’ Conservative base,” he said.

Meanwhile, among the Liberals, Justin Trudeau, although no stranger to Pride parades, made history as the first sitting prime minister to attend a Pride parade. His Liberal Finance Minister Bill Morneau was also there, glad-handing alongside Ontario Liberal Premier Kathleen Wynne and her lesbian “spouse” Jane Rounthwaite, and Ontario Finance Minister Charles Sousa.