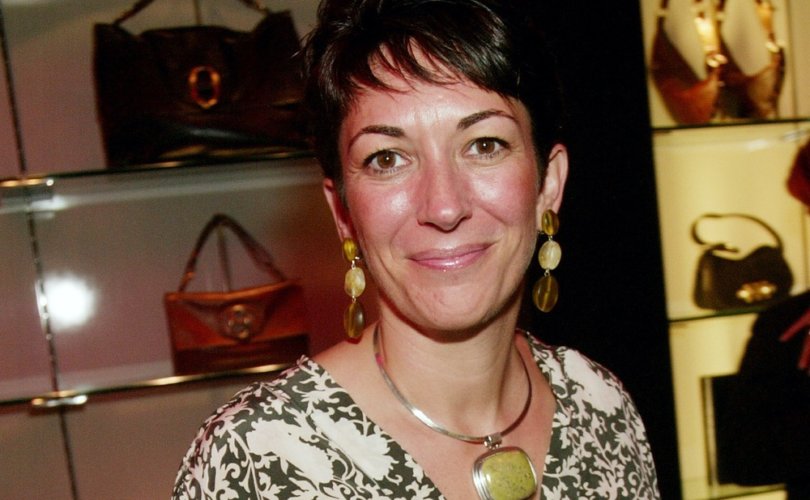 July 2, 2020 (LifeSiteNews) – Ghislaine Maxwell, the woman accused of grooming young girls for deceased pedophile Jeffrey Epstein to prey upon, was arrested Thursday morning as part of a federal investigation into Epstein’s crimes that continues beyond his death.

Epstein killed himself in his cell at New York’s Metropolitan Correctional Center (MCC) in August 2019. The billionaire was being held on charges of trafficking underaged girls to be raped by himself and wealthy associates, in a high-profile case that was believed to implicate many prominent figures around the world.

Maxwell, who was one of Epstein’s former girlfriends, was taken into custody on multiple counts of conspiracy to entice minors into sex acts, Fox News reports. She is also the target of lawsuits by several of Epstein’s alleged victims.

From 1994 to 1997, Maxwell “assisted, facilitated, and contributed to Jeffrey Epstein's abuse of minor girls by, among other things, helping Epstein to recruit, groom, and ultimately abuse victims known to Maxwell and Epstein to be under the age of 18,” prosecutors say. “Moreover, in an effort to conceal her crimes, Maxwell repeatedly lied when questioned about her conduct, including in relation to some of the minor victims… when providing testimony under oath in 2016.”

The authorities say Maxwell would start by trying to make girls comfortable with conversation about their families and school, and take them shopping and to see movies. She would then move on to “normaliz[ing] sexual abuse” by discussing sex, undressing in victims’ presence, and performing sex acts on Epstein to demonstrate what they wanted the girls to do.

Authorities further accuse Maxwell of encouraging victims to accept Epstein’s offers to pay for their education in exchange for sex, which made victims “feel indebted” to the pedophile, and that Maxwell also abused girls directly.

The Epstein case has been a source of intense curiosity for months, due to the mysteries surrounding the billionaire’s private Caribbean retreat, dubbed “Pedophile Island” by locals, as well as to the botched past prosecution and lax punishment for Epstein’s previous crimes.

Last November, Project Veritas published leaked video in which ABC News anchor Amy Robach reveals that the network spiked a devastating exposé on Epstein that allegedly would have implicated former President Bill Clinton, who is known to have flown on Epstein’s private plane on dozens of occasions.