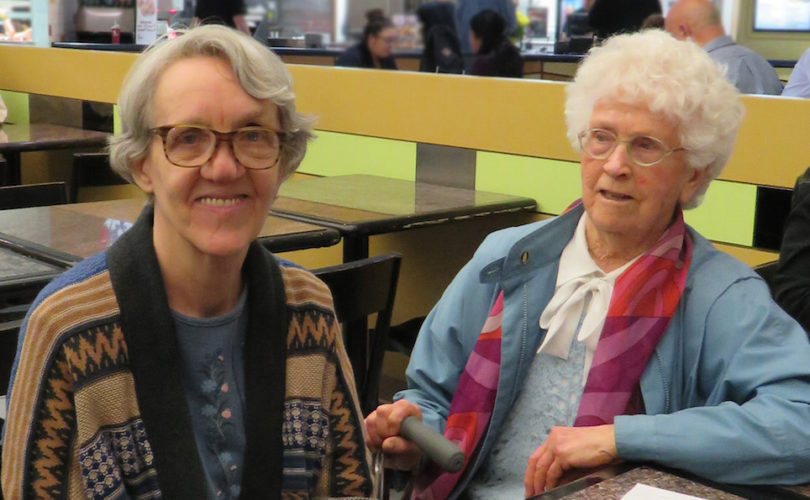 (LifeSiteNews) – Pro-life heroine Mary Burnie died on November 30 and was laid to rest on December 7.

She received the Rite of Christian Burial at St. Clare’s Parish in Toronto, offered by Father Giuseppe Scollo, and was interred at Mount Hope Cemetery.

Burnie was an ardent pro-life activist for decades and was well-known on the Canadian pro-life scene. She was a devout, life-long Catholic who generously cared for the vulnerable, and who, along with her sisters Rita and Helen, devoted countless hours to advocating for the unborn.

Her nephew Bill Burnie told LifeSiteNews that Mary was “very dedicated” in how she “prayed in front of abortuaries.” He added that she was a “good lady” and the protection of the unborn remained “her focus until her passing.”

Former president of Campaign Life Coalition Jim Hughes said lovingly that Mary’s “feisty” spirit was part and parcel of her Irish heritage. “She was a feisty woman,” he said, “she and her sisters” who were also involved in the pro-life cause.

Hughes, who was a pallbearer at her funeral, said Mary was a “regular picketer” outside of abortion mills and that she wrote to her diocese often encouraging them to do more for the pro-life cause.

“She loved her fish and chips,” Hughes added, and “she was a great friend who will be missed.”

Part of Burnie’s life as an advocate for the unborn was featured in the 1991 book Silhouettes Against the Snow: Profiles of Canadian Defenders of Life. Chapter 15 is called “Three Feisty Sisters” and profiles Mary and her sisters Rita and Helen.

Two other Canadian pro-life heroines, Linda Gibbons and Mary Wagner, were with Burnie in her last moments and at her funeral.

Gibbons, who lived with Mary Burnie for seven years, wrote down her thoughts about Burnie and what she meant to Gibbons and countless others. She wrote:

To her sisters, a loyal, home caregiver over extended years of health challenges.

To an elderly priest in a New York nursing home, a transmitter of jokes sent to her by another priest.

To elderly neighbours across the street, the comforter and supplier of summer rose bouquets from her garden.

To her Chalice sponsored child of many years, an inspiration:

Mary worked as a hospital chemist for 41 years over a lab team of 30. While Mary was in the hospital, a letter came from her Chalice ‘loving child’, who wrote, ‘I will use your gift for higher education. I am planning to go for teacher’s course or lab technician.’

To her pro-life family, a feisty comrade ready to defend life at all times: shamelessly non-apologetic.

To her Church, a passionate devotee to the Sacred Heart.

To her live-in friend of seven years, a gift of a lifetime: seven halcyon years.”