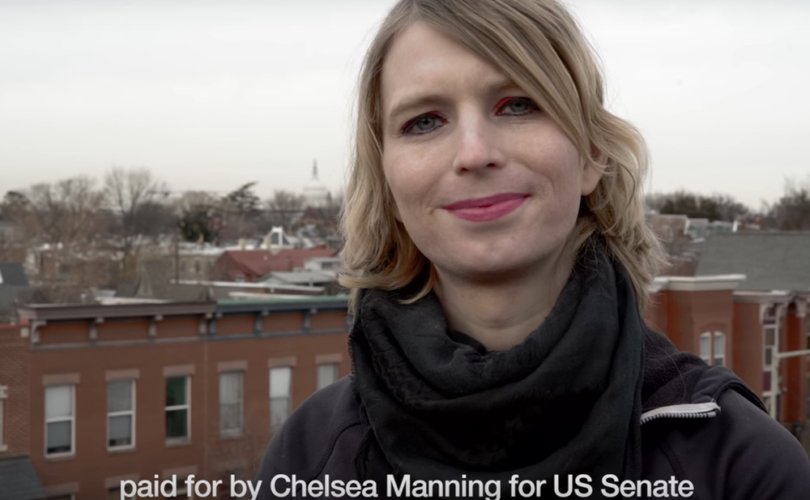 MARYLAND, January 15, 2018 (LifeSiteNews) – Bradley “Chelsea” Manning, who was convicted of violating U.S. espionage law and received taxpayer-funded “sex change” hormones in military prison, announced that he is running in the Democratic primary for a U.S. Senate seat.

Manning came to fame after leaking over 700,000 secret and/or sensitive U.S. government documents to WikiLeaks. He was court-martialed in 2013 and sentenced to 35 years in prison. Manning began that sentence at the United States Disciplinary Barracks, a military prison in Fort Leavenworth, Kansas before President Obama commuted his sentence in 2017. Obama left office shortly after doing so.

“It is incredibly ironic that a person who has betrayed his country is now considering running for the U.S. Senate, as is the case with [Bradley] Chelsea Manning,” Lt. Gen. (ret.) Jerry Boykin, Executive Vice President of the Family Research Council, told LifeSiteNews. “Manning has done tremendous damage to America and should be serving the remainder of his prison sentence rather than planning for a run for the U.S. Senate in Maryland.”

Manning filed his statement of candidacy with the Federal Election Committee on January 11. The seat for which he is running is currently occupied by Democrat Sen. Ben Cardin.

Manning will be able to vote for himself because in Maryland, felons post-incarceration may vote.

“[Y]up, we're running for senate,” he posted on Twitter on January 14. He is fundraising through ActBlue, a clearinghouse for liberal fundraising.

Manning’s first ad, which watches like a cut of a Black Mirror episode, begins by showing police and protesters clashing. It shows what appears to be some of the border between the U.S. and Mexico, police in riot gear, white supremacists in Charlottesville, and women marching in “pussyhats.”

“We live in trying times. Times of fear,” Manning says as the footage plays. “Of suppression. Of hate.”

After some of the darker, staticky riot footage, Manning is shown wearing makeup and black clothes and sauntering toward the camera. He is then shown holding a red rose while standing in front of an urban artistic backdrop.

As of Monday morning, Manning’s ad is unavailable to YouTube users under 18.

Manning has touted his transgenderism since “coming out” after his sentencing and since being released. He posed in a women’s swimsuit for Vogue, was removed from Harvard University as a “Visiting Fellow” after just two weeks, and has been barred from entering Canada due to committing in the U.S. what the Canadian government considers treason.

He also attempted suicide twice in 2016.

“Were it not for former President Barack Obama's last-minute pardon, this traitor would be where he belongs and that is behind bars where he cannot do more damage to the nation he now claims that he wants to serve,” said Boykin. “Remember that he took an oath of allegiance and fidelity to the nation once before. How did that work out?”

In November 2017, a man who presented himself as a woman became the first “transgender” state legislator in Virginia, a formerly “red state” becoming decidedly “purple” and “blue.” The man is Dan “Danica” Roem of Manassas.