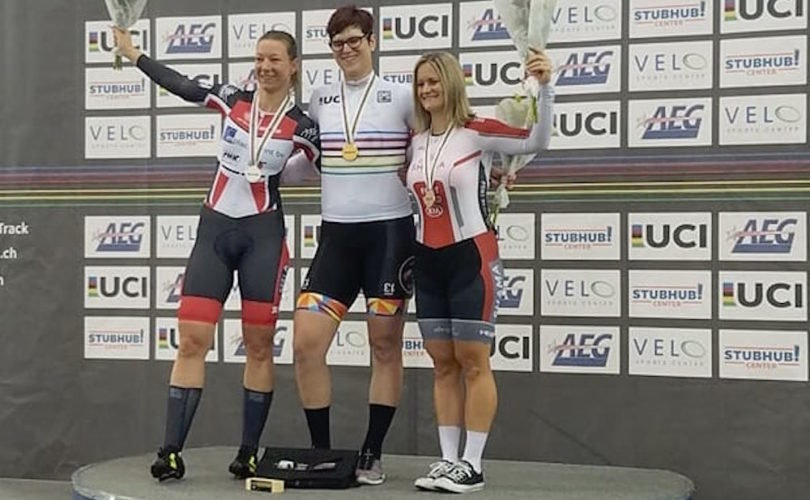 October 18, 2018 (LifeSiteNews) – The bronze medalist in last weekend’s female cycling championship isn’t pleased she lost to a biological male who identifies as a woman, Jennifer Wagner revealed this week.

McKinnon boasted that he was the “First transgender woman world champion…ever” and some have taken his win as a milestone for “equality” in professional athletics.

But while van Herrikhuyzen embraced it as an “an honest race under UCI rules,” Wagner took to social media Monday to argue the race was “definitely NOT fair,” and that the current rules – brought about by a “human rights” settlement last year – were wrong.​

I was the 3rd place rider. It’s definitely NOT fair.

Just because it’s a CURRENT UCI rule doesn’t make it fair or right. And rules can be changed.

Before Wagner’s comments, the New York Post reports that McKinnon accused his critics of being “transphobic bigots” and “objectifying real humans,” and claimed they didn’t speak for “my competitors” such as van Herrikhuyzen.

He has previously claimed there is “absolutely no evidence” men like him have an unfair advantage over actual women, while at the same time the truth about performance advantages is “largely irrelevant” because recognizing trans “women” in sports “is a rights issue” just like racial segregation.

On Tuesday, McKinnon responded to Wagner, indignant that his competing could be considered unfair when the pair’s previous races have been so close and suggesting she was “transphobic.”

…and it's unfair? Excuse me?

This is what the double-bind for trans women athletes looks like: when we win, it's because we're transgender and it's unfair; when we lose, no one notices (and it's because we're just not that good anyway). Even when it's the SAME racer. That's what transphobia looks like.

Wagner followed up Thursday with a string of tweets regretting that her earlier comments “weren't productive or positive” and “unintentionally fanned the flames on a controversial situation.” She apologized to McKinnon for “not properly congratulating you on race day” and said she respects his right to compete within the current rules.

At the same time, Wagner stressed that she remains opposed to the current rules, but has decided to work behind the scenes to change them rather than arguing about them on the internet.

They were just inflammatory, and that's not who I want to be or am. While I may not agree with the rules, when I pin on a number I agree to race by them. I also respect @rachelvmckinnon 's right to compete within the rules.

At the end of the day, we are all just people trying to find our way in this world. I'm going to continue educating myself and hope this conversation continues in an open and positive way.

I apologize, @rachelvmckinnon , for not properly congratulating you on race day. I hope you accept it a few days late. Congratulations and enjoy your off-season. Thanks, everyone, for reading. –Jennifer

For those of you who think I have “folded” I have not. There's a group of us working on getting the rules changed but we are going to fight it offline, not in the name-calling angry world of social media. I'm choosing to move on in a positive way.

So-called “transphobes” aren’t the only ones who disagree with McKinnon. The Inquisitr quotes another “transgender woman” cyclist, Jillian Bearden, as admitting that he proved “how powerful testosterone is from when I competed” as a man. “The hormone provides a certain stamina that continues to charge you. It gives you that edge of pushing power,” he acknowledges.

UCI is just one of several athletic governing bodies that have begun to allow gender-confused members of one sex to compete in the other’s brackets. Critics say UCI, the organizers of the Olympics and the Boston Marathon, and others are undermining competition and ignoring biological male and female differences to appear politically-correct and appease pro-LGBT activists.