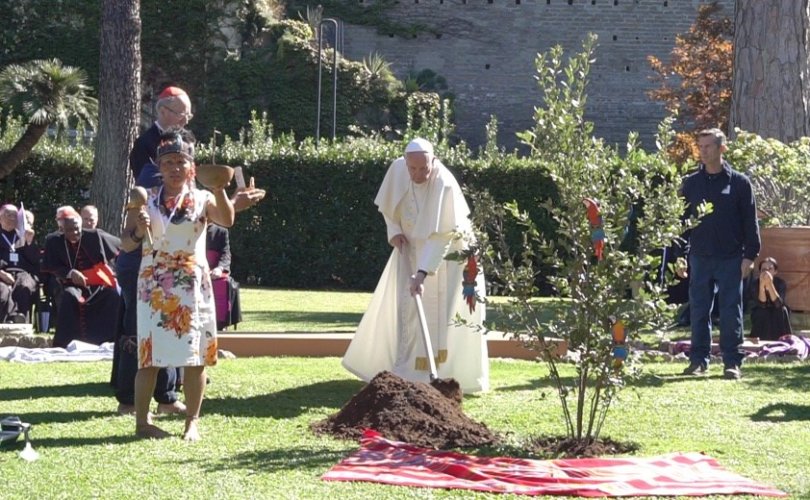 ROME, November 8, 2019 (LifeSiteNews) — The female indigenous leader who planted a tree alongside Pope Francis in the Vatican Gardens ahead of the Amazon Synod was clear from the beginning about the syncretistic and pagan meaning of the act which, she explains, was intended to “satisfy the hunger of Mother Earth” and reconnect with “the divinity present in the Amazonian soil.”

In an October 4 statement that went under the radar during the Synod itself, Ednamar de Oliveira Viana, of the Maués region in Brazil, says of the Vatican Garden tree-planting ceremony: “To plant … is believing in a growing and fruitful life to satisfy the hunger of Mother Earth’s creation. This brings us to our origin by reconnecting divine energy and teaching us the way back to the Creator Father.”

De Oliveira Viana, who also guided participants in bowing down around the Pachamama statues during the October 4 ceremony, said regarding the event: “The Synod is to plant this tree, water and cultivate, so that the Amazonian peoples are heard and respected in their customs and traditions experiencing the mystery of the divinity present in the Amazonian soil.”

Portions of Ednamar de Oliveira Viana’s statement (not including those mentioned above) were included in an official press release issued in Rome on October 4 by the Vatican Garden ceremony organizers, including REPAM (Pan-Amazonian Ecclesial Network), The Global Catholic Climate Movement, and the Franciscan Order (OFM).

The indigenous leader’s full statement can be found, in English and Portuguese, in a link at the end of paragraph five of the press release. The edited version of her remarks, and photos of the Vatican Garden tree-planting ceremony, are also available on the international Order of Friars Minor (Franciscan Friars) website.

The press release also noted that the Vatican Garden tree-planting ceremony was Pope Francis’s first gesture to mark the Season of Creation, held annually from September 1 (the “World Day of Prayer for Creation”) until the October 4th feast of St. Francis of Assisi.

Midway through the Amazon Synod, as the identity of the Pachamama statue was being sought, LifeSite asked Vatican media officials if they could provide an “authoritative text from the Vatican or REPAM so that the question of what happened in the Vatican Gardens [could] be resolved.”

Paolo Ruffini, prefect of Vatican communications and president of the Amazon Synod’s information commission, described the tree as “sacred” and promised to investigate. Despite subsequent requests, no further information was provided.

Two days later, at an October 21 press conference, Vatican spokesman Matteo Bruni asked Mauricio López Oropeza, executive secretary of REPAM, to comment on the [Pachamama] statue’s meaning — thus offering him the opportunity to comment also on the ceremony — but López declined to comment, shrugging off the question.

Traditionally the Church has taken a dim view of sacred trees. A judgement most famously illustrated when St. Boniface of Crediton, the apostle and patron saint of Germany, dramatically felled Donar’s Oak, a tree the Germans held to be sacred to the pagan god Thor. At present the Amazonian sacred tree is safely guarded within the precincts of the Vatican gardens until a new St Boniface should arise.