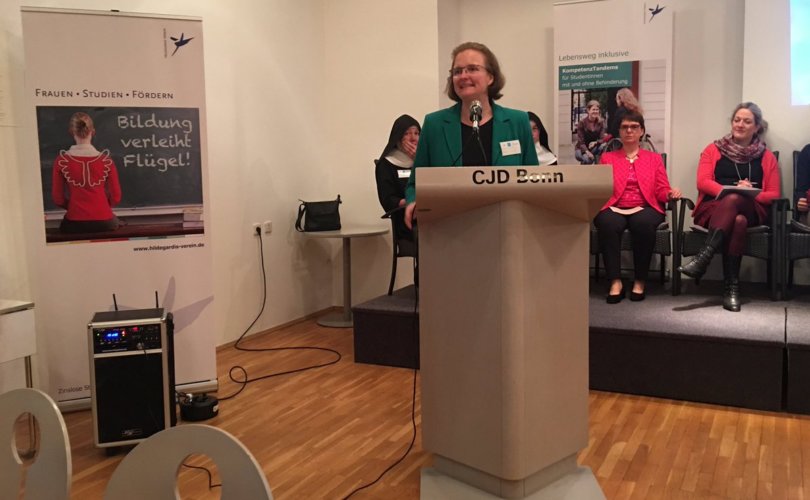 DÜSSELDORF, Germany, August 17, 2020 (LifeSiteNews) – A woman appointed by Pope Francis to the high-level group overseeing the Vatican's finances said last week that she believes women could become priests in the Catholic Church.

“In my view, a great deal is possible in this area,” Charlotte Kreuter-Kirchhof, a member of the Vatican’s Council for the Economy who was appointed to the position earlier this month, said in an interview last week with the German bishops’ news website katholisch.de. “But there are controversial debates going on in the Church at the moment.”

Kreuter-Kirchhof teaches national and foreign public law, European law, and international law at the University of Düsseldorf. She is also the chairwoman of the Hildegardis-Verein, whose stated goal is to improve women’s “personal development” by supporting them during academic studies, their career, and the compatibility of work and family life.

Together with the German Bishops’ Conference, the Hildegardis-Verein is actively working on increasing the percentage of women in leadership positions in the Church.

“Our project wants to create greater interest in the Church as a workplace among female university students and graduates and encourage and enable junior employees from Catholic institutions to aspire to executive positions in this professional field,” the official website explains.

“The programme also serves another set of purposes: to promote equal rights for men and women in this pivotal field of social interaction; to make the working culture in the institutions involved more productive and creative and to advance the sustainable development of the German Catholic Church in the 21st century.”

While the task of the Council for the Economy is “having oversight for the administrative and financial structures and activities of the dicasteries of the Roman Curia, the institutions linked to the Holy See, and the Vatican City State,” several members have voiced heterodox, or at least questionable, opinions on Church teaching.

Kreuter-Kirchhof saying in response to a question about female deacons and priests that “a great deal is possible in this area” is arguably the mildest form of at least implicit dissent from Church teaching.

Cardinal Marx himself said in July that arguments used against female ordination decades ago are getting weaker over time. The archbishop of Munich and Freising, as well as former president of the German Bishops’ Conference, claimed that the question of female ordination still needs to be discussed, even though Pope John Paul II definitively said that only men can be validly ordained.

The Polish Pope had declared in his 1994 Apostolic Letter Ordinatio Sacerdotalis that “the Church has no authority whatsoever to confer priestly ordination on women and that this judgment is to be definitively held by all the Church’s faithful.”

By extension, this is true also for the ordination to the diaconate and to the episcopacy, which together with the priesthood are both part of the one sacrament of Holy Orders.

Cardinal Gerhard Müller, the former Prefect of the Congregation for the Doctrine of the Faith, last year called it “an error” the understanding “that the Sacrament of Holy Orders really consists of three Sacraments, so that one has accordingly to decide whether the declaration Ordinatio Sacerdotalis (1994) merely applies to the ordination degree of the bishop, or of the presbyter (= the priest), or of the deacon.”

The only member of the Council for the Economy from North America is Cardinal Joseph Tobin, the archbishop of Newark, New Jersey.

Tobin is one of the American bishops most supportive of homosexuality and gender ideology, suggesting during an interview conducted in 2019 that the Church might change her teaching on these issues.

“The Church, I think, is having its own conversation about what our faith has us do and say with people in relationships that are same-sex,” Tobin said. “What should be without debate is that we are called to welcome them.”

Tobin characterized the teaching, as stated in the Catechism of the Catholic Church, as “very unfortunate language. Let’s hope that eventually that language is a little less hurtful.”

The Catechism states, “Basing itself on Sacred Scripture, which presents homosexual acts as acts of grave depravity, tradition has always declared that ‘homosexual acts are intrinsically disordered.’ They are contrary to the natural law. They close the sexual act to the gift of life. They do not proceed from a genuine affective and sexual complementarity. Under no circumstances can they be approved.”

“In too many parts of our church LGBT people have been made to feel unwelcome, excluded, and even shamed,” Tobin wrote. “Father Martin’s brave, prophetic, and inspiring new book marks an essential step in inviting church leaders to minister with more compassion, and in reminding LGBT Catholics that they are as much a part of our church as any other Catholic.”