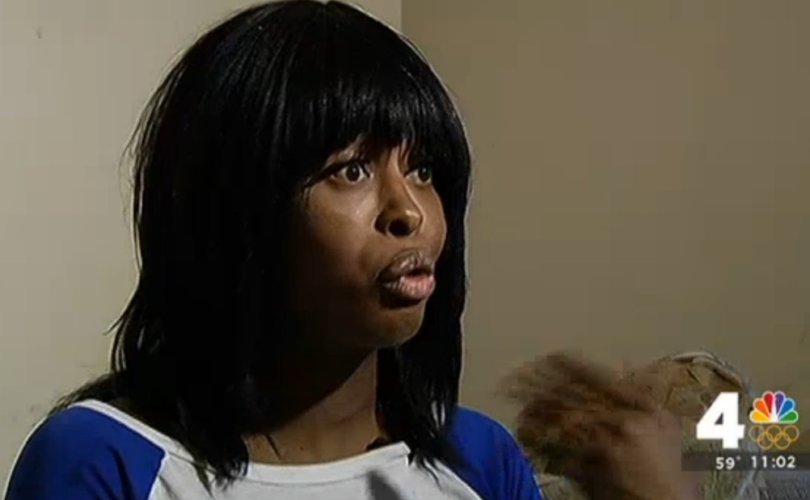 The 32-year-old man, Ebony Belcher, called a longtime transgender activist, who encouraged him to call the police.

WASHINGTON, D.C., May 19, 2016 (LifeSiteNews) – A female security guard has been arrested and faces being charged with a potential hate crime for removing a biological male from a women's restroom in the nation's capital.

The unnamed guard asked the transgender man to leave a women's bathroom in a Giant store near the intersection of H and Third St. NE in Washington, D.C., around noon on Monday.

When the 32-year-old man, who goes by the name Ebony Belcher, refused to leave, the guard escorted him out of the store.

Belcher said the woman told him, “You guys cannot keep coming in here and using our women’s restroom. They did not pass the law yet.”

The altercation allegedly turned physical, and the two were “getting into it and throwing stuff,” eyewitness Tony Pixley told WJLA-TV. “They went back and forth.”

After being expelled, Belcher contacted a “longtime transgender activist,” according to local NBC-4, a man who identifies as a female and goes by the name Earline Budd. Budd told Belcher to call the police.

The female guard was arrested for allegedly committing assault. The police report lists it as a potential hate crime, and the city's office of LGBT affairs is watching the case, NBC-4 reports.

The store, Giant, released a statement about the guard – who is employed by an independent security company – directing all comments to local police.

But at least one individual said the guard's action just enforced common sense. Shopper Deana Chisholm told WJLA, “You got a penis – go to the men's bathroom. If you are born a woman, go to the woman's bathroom – period.”