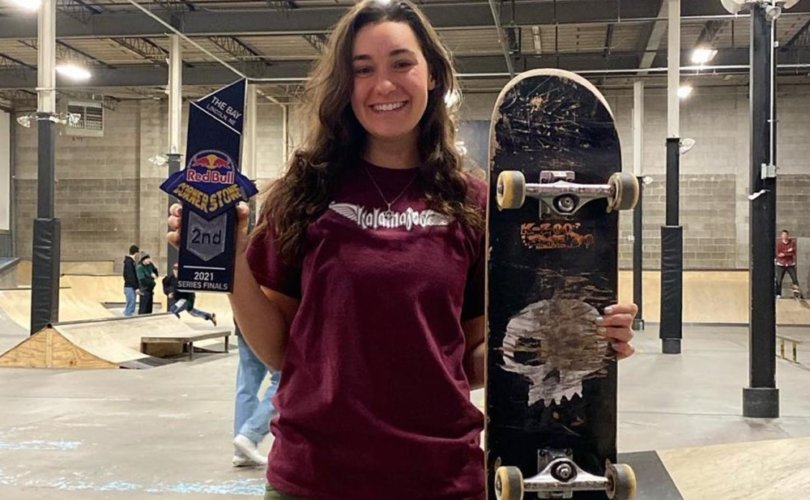 (LifeSiteNews) — A professional skateboarder has spoken out against a gender-confused man’s victory over girls and women in a women’s skateboarding competition.

Male skateboarder Ricci Tres (formerly known as Richard Batres), 29,  defeated six female competitors, four of them under 17, on June 25 in a professional skateboarding competition. That did not sit well with Taylor Silverman, who criticized Tres’ domination on Fox News.

“This does happen quite often in skateboarding. This happened to me on three separate occasions, two of which I placed second, and every time it’s been a different person,” Silverman told Dana Perino on Friday.

“I think that there’s probably a lot of stories that I don’t know about,” Silverman added and suggested it’s likely been going on for some time.

The skateboarder said that the “important part” is not the ages, but that there’s “a male in the women’s division,” Silverman said.

Some organizers are “ignoring female athletes when we speak up about it,” Silverman said. She accused Red Bull, a sponsor of competitions, of ignoring her concerns.  Silverman said she gets messages regularly supporting her for speaking out against the participation of gender-confused men in female sports.

Silverman said parents must speak up against the “abuse.”

“If you’re a parent of a child who has gone through this, speak up for your kid,” she said. “We shouldn’t allow this type of abuse. This should be something normal to stand up for your kids when they’re being abused in situations like this.”

“We shouldn’t be sitting in silence and fear.”

According to the Daily Mail, Ricci Tres was “a 2nd Class Petty Officer in the Navy who was married to a woman and has three kids.” Apparently he began taking female hormones two years ago after a boyhood of “feeling ‘guilty’ about crossdressing.”

The Fox News segment critical of part of the LGBT agenda is a change of pace from just a few weeks ago, when Perino introduced a segment that glowingly told the story of Ryland Whittington, a gender-confused girl who pretends to be a boy.

“What extraordinary courage,” reporter Bryan Lllenas said, praising the family. “People are afraid of what they don’t understand,” Llenas said to wrap up the segment.

Silverman’s criticism of gender-confused men in female sports is just the latest example of women speaking up against the domination of women’s competitions by males.

“I am almost certain I’m speaking for a large majority of female athletes that this is just not okay and it’s not fair,” Gaines told Carlson. “What we’re seeing is cheating.”

She said NCAA officials have ignored her concerns.