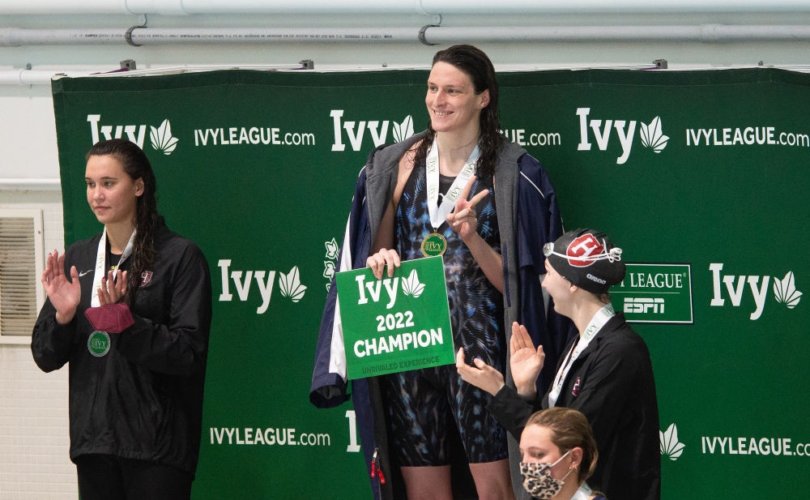 University of Pennsylvania swimmer William "Lia" Thomas smiles on the podium after winning the 200-yard freestyle during the 2022 Ivy League Women's Swimming and Diving Championships in February. Kathryn Riley/Getty Images

(LifeSiteNews) — Virginia Tech swimmer Réka György has blasted the National Collegiate Athletic Association (NCAA) for its policy allowing men who identify as women to compete on women’s swim teams, arguing in an open letter last weekend that “[e]very event that transgender athlete competed in was one spot taken away from biological females.”

György, a Hungarian-born swimmer who participated in the 2016 Summer Olympics in Rio de Janeiro and now competes on the Virginia Tech women’s swim team, wrote the letter in reference to the NCAA policy which allowed “transgender” University of Pennsylvania swimmer William “Lia” Thomas to compete in the Division 1 Women’s 500 Yard Freestyle held March 17.

‘TAKEN FROM ME’: Swimmer who missed out on finals by one spot rips NCAA for allowing transgenders to compete. https://t.co/3Zbmxgng4J pic.twitter.com/XnrehBNfEW

Thomas, a man who identifies as a woman, has shattered records and generated national controversy since he began competing on the women’s team after swimming for three seasons on the men’s team. He was declared the winner of Thursday’s NCAA competition, coming in 1.75 seconds ahead of the best female swimmer, Emma Weyant of Sarasota, Florida.

Florida’s Republican Gov. Ron DeSantis has since declared Weyant the true winner of the competition.

RELATED: Biden Supreme Court pick says she can’t define what a ‘woman’ is when asked at confirmation hearings

For her part, György was bumped out of the top 16 swimmers allowed to compete in last week’s event after earning 17th place in the freestyle preliminaries in which she swam against Thomas.

If she had taken 16th place she would have earned a spot in the “B” final, where she could have raced again and taken home the All-America honorable mention.

In her letter slamming the NCAA for allowing Thomas to compete against women, the former Olympic swimmer said she lost her opportunity to Thomas, and blasted the association for its “lack of interest in protecting their athletes.”

“I would like to critique the NCAA rules that allow [Thomas] to compete against us, who are biologically women,” said György, who added that she “respect[s] and fully stand[s] with Lia Thomas,” but hopes “the NCAA will open their eyes and change these rules” allowing men who identify as women to compete against females.

“Every event that transgender athlete competed in was one spot taken away from biological females throughout the meet,” she wrote.

György, who gave credit to Thomas for his sacrifice and hard work training for the competition and referred to the 22-year-old man as “she,” asked in a preamble to her open letter that those who wish “to disseminate my statement would agree to release my statement in full.”

“I do not want any partial releases of my statement and do not [wish] to make further comments,” György added.

György’s letter is provided in full below:

My name is Reka Gyorgy from Hungary. I am a 2016 Rio Olympian, represented Virginia Tech for the past 5 years, a 2 time ACC Champion, 2 time All-American and 3 time Honorable Mention All-American.

With all due respect, I would like to address something that is a problem in our sport right now and hurting athletes, especially female swimmers. Everyone has heard and known about transgender, Lia Thomas, and her case including all the issues and concerns that her situation brought to our sport. I’d like to point out that I respect and fully stand with Lia Thomas; I am convinced that she is no different than me or any other D1 swimmer who as woken up at 5am her entire life for morning practice. She has sacrificed family vacations and holidays for a competition. She has pushed herself to the limit to be the best athlete she could be. She is doing what she is passionate about and deserves that right. On the other hand, I would like to critique the NCAA rules that allow her to compete against us, who are biologically women.

I’m writing this letter right now in hopes that the NCAA will open their eyes and change these rules in the future. It doesn’t promote our sport in a good way and I think it is disrespectful against the biologically female swimmer[s] who are competing in the NCAA.

I swam the 500 freestyle at NCAA’s on March 17th, 2022 where I got 17th which means I did not make it back to the finals and was first alternate. I’m a 5th year senior. I have been top 16 and top 8 before and I know how much of a privilege it is to make finals at a meet this big. This is my last college meet ever and I feel frustrated. It feels like that final spot was taken away from [m]e because of the NCAA’s decision to let someone who is not a biological female compete. I know you could say I had the opportunity to swim faster and make the top 16, but this situation make it a bit different and I can’t help but be angry or sad. It hurts me, my team and other women in the pool. One spot was taken away from the girl who got 9th in the 500 free and didn’t make it back to the A final preventing her from being an All-American. Every event that transgender athlete competed in was one spot taken away from biological females throughout the meet.

The NCAA knew what was coming this past week. They knew opinions and minds will be divided and chose to do nothing. This week has been more about reporters, media and division in our sport than things like two women going under 21 seconds in the 50 freestyle, 3 women going under 50 seconds in the 100 butterfly and the first women IN HISTORY to go under 49 seconds in the 100 backstroke. Thursday was not a specific athlete’s fault. I tis [sic] the result of the NCAA and their lack of interest in protecting their athletes. I ask that the NCAA takes time to think about all the other biological women in swimming, try to think how they would feel if they would be in our shoes. Make the right changes for our sport and for a better future in swimming.

Thank you for reading,

Following the publication of her open letter, György’s name made headlines after Twitter suspended an account with the handle @RekaGyorgy_ when the user posted a tweet arguing that György’s spot was stolen by Thomas in last week’s competition.

“My finals spot was stolen by Lia Thomas who is a biological male,” the user wrote. “Until we all refuse to compete nothing will change. Thanks for all the support retweets and follows I won’t stop fighting.”

Social media users had pointed out that a screenshot of the suspended account accompanies the Twitter ID amanda191923, suggesting the Twitter handle was changed to impersonate Reka György.

Meanwhile, legitimate Twitter users have faced censorship for stating that men who say they are women are indeed men.

On Wednesday, Twitter censored a tweet from Fox News’ Tucker Carlson declaring that a man is a man, while Turning Point USA founder Charlie Kirk’s similar statement resulted in suspension from the platform.

The Christian satire site The Babylon Bee was also suspended for violating Twitter’s policy on “hateful conduct” on Sunday for referring to Assistant Health and Human Services Secretary Richard “Rachel” Levine as a man, even though he identifies as a woman.

“They want us to go into our account and click the delete button ourselves,” Mann wrote. “We have to bend the knee, kiss the ring, bow to the towering statue of LGBTQ politics when the trumpets play, or we stay on timeout indefinitely. We have to promise to do better, implicitly agree that calling a man a man is hate speech, and then we’ll be allowed the right to speak on Twitter’s platform.”

“Well, we’re not going to do that,” he said. “We’re fighting back. We’ll do whatever we have to do to retain our integrity here. As Orwell wrote, ‘Freedom is the freedom to say that two plus two make four. If that is granted, all else follows.’”