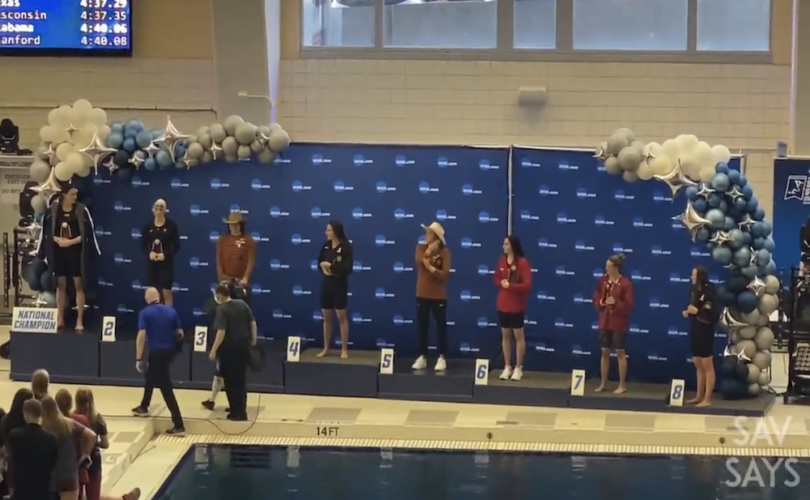 (LifeSiteNews) – The prospect of professional, personal, and academic reprisals has left female swimmers “frightened” to speak out about the intrusion of biological male Lia Thomas in their competitions, according to the mother of one such swimmer, speaking on condition of anonymity.

The Post Millennial reports that the unidentified mother of an Ivy League, National Collegiate Athletic Association (NCAA) swimmer spoke to the conservative Independent Women’s Forum (IWF). She made the comments in reference to University of Pennsylvania swimmer William “Lia” Thomas, a man who recently “transitioned” to female yet retains male genitalia and reportedly remains heterosexual (despite self-identifying as lesbian), which has generated unease among his female teammates, particularly due to sharing lockers.

His participation in female swim competitions has also caused unrest due to the fact that he quickly started dominating women’s swimming after switching from the men’s team, which was the focus of the mother’s comments.

“So the first time I heard about Lia Thomas, I was just glancing through the results of some of the early dual meets in the season and I thought, who is Lia Thomas? Why don’t I know this name?” she said. “The idea that there was an Ivy League swimmer that was capable of going 1:46 in the 200 free in a practice suit in a dual meet was shocking because that would have been someone I would have — that would have been on the radar.”

“Holy cow, we’re going to talk about a male swimmer — a full grown male — attempting to take down female icon records, and taking a spot on an Ivy team from one of the Penn swimmers, who have rightfully deserved it,” she continued. “And we’re talking about, this person’s gonna swim on every relay going forward at championship meets, is going to take the position of a woman on a travel team, is going to take a space in every finals.”

The mother explained that in the beginning, “the girls thought that ‘of course this isn’t right,’” and expected the schools to resolve the situation. But as time went on it not only became clear that universities had no intention of removing Thomas from female competitions, but “when their news started asking questions, the schools in each case across the Ivy League, pulled their swimmers aside and said, ‘you’re not allowed to talk about this.'”

The is is bravery in the face of mindless hysteria.

A clash of views as Lis Thomas races ahead at the NCAA 500 freestyle prelims. pic.twitter.com/X9J5yzmozd

Critics argue that indulging transgender athletes in this way undermines the original rational basis for having sex-specific athletics in the first place, thereby depriving female athletes of recognition and professional or academic opportunities. Scientific research affirms that physiology gives males distinct advantages in athletics, which hormone suppression does not suffice to cancel out.

NCAA- As winners are announced crowd goes wild for 2nd place winner of the 500Y Freestyle.

In an apparent sign of widespread disapproval of the new gender-fluid status quo, the Daily Mail notes that despite Thomas placing first in Thursday evening’s NCAA 500-yard freestyle final, the audience in attendance was reportedly much more enthused for actual female swimmer Emma Weyant, who placed second and was dubbed the “real winner” by the Mail and on social media.