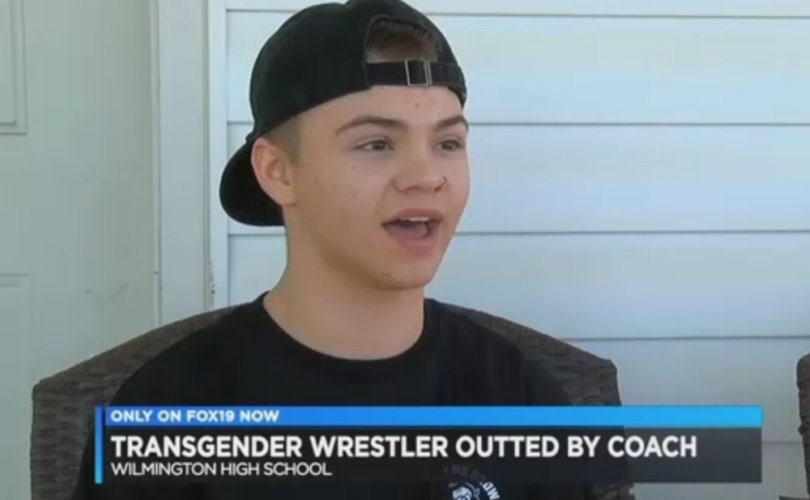 WILMINGTON, Ohio, March 8, 2018 (LifeSiteNews) – A transgender freshman on the wrestling team of Wilmington High School quit her team because the coach made her use the changing room that corresponds with her biological gender.

Her mother is complaining that the coach revealing her daughter’s sex was disclosing “privileged medical information,” which is illegal.

Aubry Pogue-Krabacher, who dresses and presents herself as the boy “Aidan,” wrestled as a girl (against boys) since sixth grade, and now wrestles as a “boy.” She says wrestling Head Coach Kelly Tolliver humiliated her in front of the wrestling team by “outing” her as biologically female.

“He made it very clear that he didn’t want me in there, and that I shouldn’t be in there because I’m a girl,” she told Fox 19. She said told her coach she’s not a girl but he “still proceeded to say ‘yes, you are’ and kicked me out” of the boys’ intimate facilities.

Deeply offended, the girl and her mother Sheila complained, demanding that Coach Tolliver be fired for “outing” her.

“We don’t discriminate against anyone,” he said.

Highly significant for legal precedent is that Pogue-Krabacher’s mother claimed to the school board that revealing Aubry is a girl was illegally disclosing “privileged medical information.” Medical records are considered confidential information under federal law.

“Not only did Coach Tolliver announce to the entire team that [Aubry] is transgender, he publicly humiliated [her] in front of [her] classmates with privileged, medical information he had no business sharing,” the mother told the school board.

The Health Insurance Portability and Accountability Act of 1996 (HIPAA) includes a section on keeping a patient’s medical records strictly secret. Known as “the Administrative Simplification” provisions, the law is intended to protect patient privacy in healthcare. Hospitals, for instance, may not reveal medical information even to relatives unless the patient makes a prearranged agreement consenting to it.

If Pogue-Krabacher decides to pursue legal action and can convince a judge that revealing a transgender’s biological sex is a violation of HIPAA medical privacy laws, Tolliver may spend time in jail.

In 2015, a Texas hospital worker was sent to jail for a year and a half because he disclosed medical information in violation of HIPAA. In 2014, Walgreens was sued and lost when a pharmacist shared with a woman medical information about her husband’s ex-girlfriend. The plaintiffs in that case were awarded $1.4 million.

Pogue-Krabacher said at least one boy in her grade didn’t want to wrestle her because of her female anatomy, which that student apparently described in a vulgar way.

At 15 years old, Pogue-Krabacher says she is nearly three quarters of the way through her “transition” into a facade of masculinity.