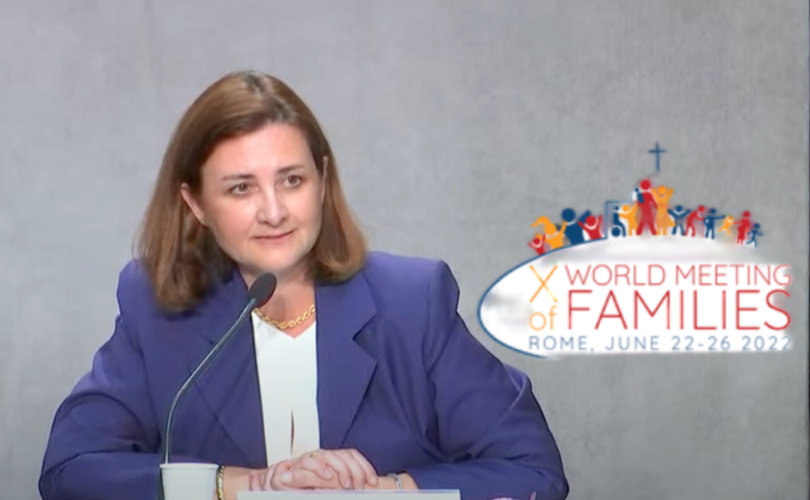 Professor Gabriella Gambino, the undersecretary of the Dicastery for the Laity, Family and Life/ Logo for the World Meeting of FamiliesVatican News screenshot

VATICAN CITY (LifeSiteNews) – A Vatican official declared the upcoming World Meeting of Families will be focused on what she described as “Amoris Laetitia” families and “truly inclusive” to all, including to “LGBT families.”

In a May 31 press conference for the upcoming 10th World Meeting of Families (WMOF) to be held in Rome in June, Professor Gabriella Gambino, the undersecretary of the Dicastery for the Laity, Family and Life revealed the event’s policy with regard to the LGBT movement.

The WMOF has as its “purpose” the aim of developing the meeting’s theme of “family love: vocation and way to holiness,” said Gambino, which would be done via “a process of welcome, accompaniment and discernment.”

This would be supported by “taking into account some strong indications that emerge from Amoris Laetitia, a text that presents itself with very clear programmatic lines for the possible developments of family pastoral care in the coming years,” she added.

Further details came when journalist Giuseppe Rusconi asked Gambino if the WMOF would be held under the banner of “Love is love” and if the term “rainbow families” would be accepted at the meeting. Rusconi further asked if LGBT flags would be on display.

While Gambino avoid providing a direct answer, she restated the WMOF is “dedicated to the Amoris Laetitia family.” Such a phrase was not defined by Gambino, but the New Daily Compass suggested that the phrase was used to denote a rejection of the traditional sense of the family in favor of something more “inclusive.”

Gambino stressed the widely “inclusive” and “accompanying” nature of the WMOF, saying that the “pastoral conversion” envisioned by Pope Francis must be a “pastoral” approach that “knows how to accompany everyone.”

“There are no recipes for all situations,” said Gambino, before repeating the catchphrase of “accompaniment” as a key part of the WMOF’s approach to same-sex couples.

Asked about participation by LGBT families, Professor Gambino said that in the spirit of Amoris Laetitia it was important to accompany everyone with mercy and welcome towards the love of the Father, and that all families need to feel accompanied by the Church.

Including this in Vatican News’ report is notable, for while the topic of LGBT ideology has been raised a various press conferences before, it is rarely included in the Vatican’s official news report on the conference.

— Article continues below Petition —
Pope Francis: Don't make Bishop McElroy a cardinal - he knew about McCarrick
Show Petition Text
12665 have signed the petition.
Let's get to 15000!
Thank you for signing this petition!
Add your signature:
Show Petition Text

Gambino’s use of the term Amoris Laetitia families” echoes the recently appointed pro-homosexual head of the John Paul II Institute for Marriage and Family, Monsignor Philippe Bordeyne, who in 2021 called for a change in the Church’s understanding of the family. “We theologians cannot continue to assert certainties about the family when we see the transformations it is undergoing today,” he told La Croix.

The WMOF, held in Rome June 22-26, does not have any explicit reference to “LGBT families” in its official program, with the nearest topic being a hour-long panel on June 24 entitled “Educating young people in sexuality and affectivity.”

With 62 speakers at the conference, only three will be priests, and “almost all will be married couples,” according to Gambino.

Dissident pro-LGBT group New Ways Ministry lamented the lack of an explicit section of the WMOF dedicated to “LGBTQ families,” but urged the speakers to “take up Gambino’s invitation and include LGBTQ families’ concerns and needs as part of their talks about broader topics.”

The previous WMOF, held in Dublin in 2018, featured a number of concerning topics for faithful Catholics due to its promotion of LGBT ideology. The theme for the 2018 event was Amoris Laetitia.

Speaking at the WMOF, prominent pro-LGBT Jesuit, Father James Martin – a late addition to the meeting – told attendees that active homosexuals should be “invited into parish ministries,” particularly in the role of “eucharistic ministers” in order to make them welcomed and accepted in the Catholic Church.

According to Fr. Martin, he had been specifically invited by the Dicastery for Laity, the body responsible for organizing the WMOF.