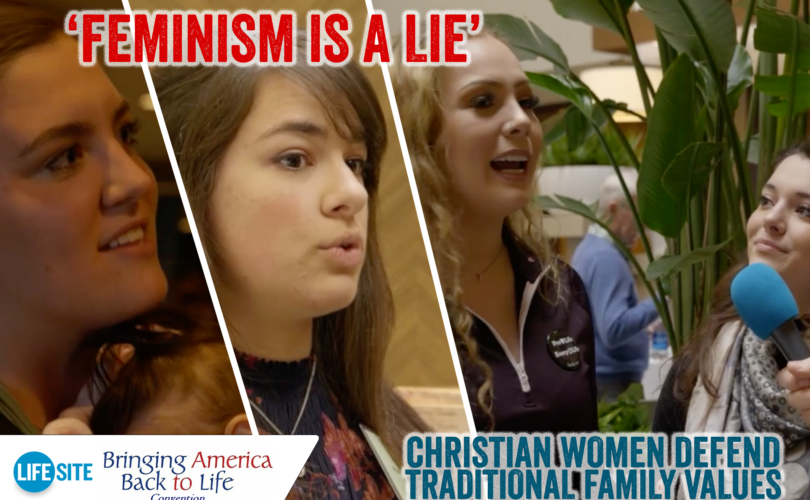 INDEPENDENCE, Ohio, May 21, 2021 (LifeSiteNews) — Being a young woman isn’t easy these days. Planned Parenthood, liberal politicians, and pop culture all tell them that they need a career and the right to kill their unborn child in order to be a strong and successful woman. But the young women that attended this year's Bringing America Back to Life convention in Cleveland, Ohio, told LifeSite that they reject those ideas.

“Feminism in today’s society is not something that is really supporting women at all. In fact, it’s hurting women more than anything,” one young woman said.

“God created woman to do everything a man cannot do: carry children, nurture them, and raise them. God made us to be the heart of the home rather than the head … being too much like a man, you lose what it means to be a woman,” remarked another.

Claire Dyson from the Ohio-based Center for Christian Virtue also rejected the idea that abortion is a form of empowerment.

“It is a lie to tell young women that they can’t be authentically feminine, that we can’t live out our call to life, to nurture. It is a lie that we can’t do that and have full lives because it is built into our very DNA that women in general are nurturers.”

Dyson added that “the great tragedy of the day [is] that men and women don’t understand what it is to be men and women. We have been fed a lie for decades that each must be the same. We equate equality with sameness when really our true strength lies in our differences.”

It wasn’t just young women like Dyson who believe feminism is wrong. College students Kaitlyn Hogg and Malorie Hussey from Franciscan University do as well.

“I’m pro-life because it could have been me, quite honestly,” said Hogg, who hails from Buffalo, New York. “My birth mom had me at a very young age and she put me up for adoption. And a lot of times adoption gets overlooked, and adoption is the loving option because, like you said, there are a lot of women who think it is empowering to have an abortion. But I have found even in some of my friends’ experiences that it actually hurts the women and the baby.”

“There are so many families who want babies,” Hussey stated. “I have members of my family who have been trying to adopt for years and can’t find a child because everyone’s aborting the babies they don’t want instead of giving them to families. And I think one of the biggest problems with feminists today in that sense is that we don’t respect the life, and life is why we’re here. I mean, if you think about it, our mother brought us into this world.”

“[Being pro-life is] the saving of people from getting murdered. And I believe that it matters to save people because it’s horrible to kill them,” said one. “It’s sad that people don’t understand that even though they’re in the womb, that they’re not people. But they are. They have their own body. They have their own mind. And it’s just terrible how people don’t believe that. And it’s just terrible how people murder and slaughter all the innocent babies in the world.”

To watch all the other interviews LifeSite conducted at the Bringing America Back to Life 2021 convention, click below.

Classical education is the future of Christian education

Prominent pro-life leader: We do not back down on defending God’s truth

Pregnant women ‘should not be taking’ the COVID shot: vaccine expert

Pro-life lobbyist: We need to protect the unborn with a ‘personhood amendment’ to the Constitution

‘Life without exception’: Rape survivor explains why she opposes abortion

Pro-life priest: Joe Biden has spent most of his career pushing anti-life policies